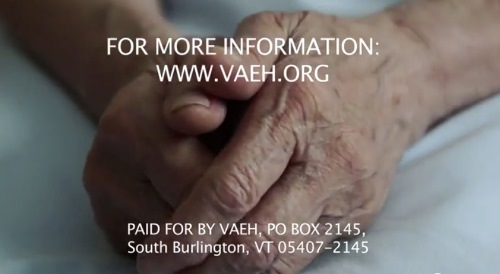 A screenshot from an ad by the Vermont Alliance for Ethical Health Care, which opposes Vermont’s new physician-assisted death law.

The debate on Vermont’s Death with Dignity law is not over yet.

The Vermont Alliance for Ethical Health Care, an organization opposed to the state’s physician-assisted suicide law, has started an advertising campaign to spread awareness on Vermont’s End of Life Choices law ahead of a lobbying effort calling for its repeal.

In May, Vermont enacted legislation allowing terminally ill patients to obtain medication to help them end their lives.

Act 39 grants doctors civil and criminal immunity if they follow a series of required steps before prescribing a lethal dose of medication to a patient with a life expectancy of fewer than six months who requests it. The requirements expire after three years, by which point lawmakers hope doctors will have developed their own guidelines for the process of assisted suicide.

Opponents of the law are running advertisements on television and radio highlighting what they consider to be the law’s main flaws, said Edward Mahoney, president of the Vermont Alliance for Ethical Health Care.

Mahoney, a professor of religious studies and bioethics at St. Michael’s College, said the purpose of the campaign is to raise awareness and let opponents know there is still an active opposition to the law. Mahoney’s organization has about 300 members, many of whom support the organization through donations, he said.

Dick Walters, president of Patient Choices Vermont, an organization that advocates for end-of-life options and supports Vermont’s current law, said the campaign will not gain traction in the Legislature because it is a scare tactic.

In 2002, Walters began an effort to bring a bill similar to that of Oregon’s 1997 Death With Dignity law to Vermont. He said his organization is preparing to protect Vermont’s law, which he said has all of the Oregon law’s critical components.

While there might be a debate, lawmakers will not repeal the law this session, said Rep. Anne Donahue, R-Northfield.

She said the Legislature, which operates on a biennial session, cannot repeal a law it enacted in the same session.

However, she said the law could be amended to include components that were taken out of the original House bill at the last minute, such as the protections for other health care professionals when assisting a patient’s suicide, she said.

She said it is unlikely that lawmakers will even discuss the law this session. Instead, she said, a robust debate is more likely to occur in 2015 ahead of the changes to the law in 2016 that will make physician-assisted death a regular medical practice.

Mahoney said he does not want to wait until 2016 for a debate.

“The Legislature is going to look at this again in a couple of years, why not look at it now, when it is fresh in everybody’s mind?” he said.

He said some lawmakers who voted for the bill were not happy with it, and that offers the organization some hope for repeal.

“There is some discontent among legislators who even voted for this in the first place,” Mahoney said.

The organization is working out a strategy for repeal. Mahoney said he will meet with lawmakers and lobbyists to set a strategic plan for seeking repeal.

Pharmacists are concerned about their liability when prescribing drugs used for the assisted suicide, he said. This is because the language of the bill is unclear on the patient’s capacity to request the assistance, he said.

The act uses the word “capable” to describe the patient’s ability to make and communicate health care decisions to doctors. This, Mahoney said, is difficult language to interpret.

He said the ads will run throughout the fall ahead of the legislative session. The organization will not bring the issue to court, Mahoney said.

Thanks for reporting an error with the story, "Group launches effort to repeal physician-assisted death law"