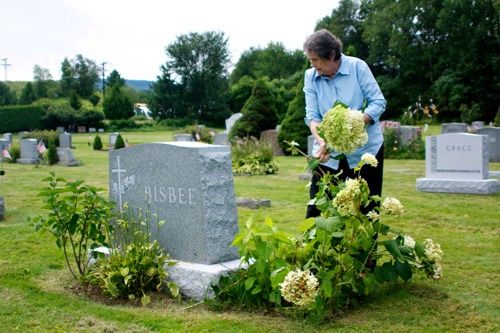 Mary Alice Bisbee, a member of the Funeral Consumers Alliance of Vermont, wants to make it easier for Vermonters to be buried burial without caskets and gravestones, if they so wish. Here, she tends flowers at her mother’s grave in Holy Cross Cemetery in Duxbury, where she doesn’t want to be buried. Photo by Viola Gad/VTDigger

An increasing number of Vermonters want to make their final decision a green one. And with more than 40 “green burial” sites popping up around the country in recent years, the Funeral Consumers Alliance of Vermont wants to make green burial an option for consumers.

A bill regulating green burial died in the 2013 legislative session.

Government officials and representatives of the Green Burial Council are not sure if such legislation is needed. As of now, burial without vaults or caskets is already legal on private property and in certain cemeteries. No other state has passed a bill regulating green burial.

“We don’t believe that legislation is necessary,” says Joe Sehee, program officer at the Green Burial Council, the national organization that has been advising on regulations for green burial sites since 2005. “We believe that we need regulations to make sure promises by the natural burial sites are being kept up.”

The definition of green burial is broad and individual to the customer, says Jonathan Boucher, funeral director at Guare & Sons, a funeral home in Montpelier. For some, it could mean a burial without embalmment; for others it could mean burial without a casket, he said.

The Green Burial Council defines green burial as ”A way of caring for the dead that does not require the use of energy and resource intensive and often toxic products and practices associated with conventional funeral service such as concrete burial vaults, metal caskets and embalming,” Sehee said.

The standards set up by the organization also ensure that the concept furthers legitimate environmental aims such as the protection of worker health, reduction of carbon emissions, conservation of natural resources and preservation and restoration of habitat, he said.

A bill to regulate green burial in Vermont was presented to the House Committee on General, Housing and Military Affairs by Reps. Mike Yantachka, D-Charlotte, and James McCullough, R-Williston, during the 2013 session, but it was not picked up by the committee.

“We don’t have any plans about that bill right now,” said Rep. Helen Head, D-South Burlington, chair of the House Committee on General, Housing and Military Affairs.

The film “Dying Green” will be screened at the Senior Activity Center in Montpelier at 4:30 p.m. on Aug. 23.

“Dying Green” tells the story of a natural reserve in South Carolina, where bodies are being buried without caskets and embalmment. Metal from hip replacements or other surgery is collected for recycling. The burials are made in a natural reserve, and, in some cases, without formal gravestones.

Head said the committee did not have time to dig into the details of the bill last session.

McCullough, the co-presenter of the bill, said it will not be on his priority list next session (work in the Lake Shoreland Protection Commission will come first, he said).

He introduced the bill last session for two reasons. First, he believes in the ecological aspects of green burial and that it makes sense that humans “who stem from soil should return to soil.” Second, he had a friend who died of cancer because of contact with toxic embalmment chemicals during his work as a mortician. On his deathbed, the friend asked McCullough if he could “do something about this.”

The bill that was proposed last session didn’t include wording about the markings of the graves, which is one of the reasons why Patrick Healy, superintendent of the Green Mount Cemetery in Montpelier, testified against it on the day it was introduced.

”This group of people wanted a ‘natural burial’ definition put under the cemetery statutes,” he said. ”But they appeared not to want to follow the other regulations for a cemetery, such as a recorded plot plan at the local town clerk’s office.”

Head said that if the bill resurfaces it would need more research.

“My understanding is that they (graves) do require marking, and if that would not be required with the bill then the committee would have to learn more about how it would affect cemeteries and municipal regulations,” she said.

Giving people more information about green burial as an affordable option to conventional funerals is important, said Mary Alice Bisbee, a  member of the Funeral Consumers Alliance of Vermont.

“We’re not ahead of the nation on this,” she said.

There are more than 40 natural reserves designated for green burial, said Shee. But Vermont has none, said Bisbee. These 40 follow the Green Burial Council’s guidelines; there are about 20 more burial grounds that have not yet been “accepted” by the council.

Green Mount Cemetery doesn’t offer green burials for caskets, but they do bury cremated remains in a wooded section of the cemetery, with markers, Healy said.

He is worried that unmarked graves in natural reserves could become a legal issue. If a court order required a grave to be dug up, how would one know its location if it is not marked, he asked.

Bisbee doesn’t think marking will be a problem. There are GPS and other systems to mark the graves’ locations, she said.

“There are probably dead bodies buried everywhere that we don’t know about,” Bisbee said.

Some funeral homes in Vermont have started to look into doing green burials without state legislation. The Westerlund Funeral Home in Brattleboro has seen a growing interest in green funerals in the past couple of years.

“We get weekly inquiries about green burials,” said Beth Perkins, the funeral home’s director and manager.

The company handles about 125 to 150 burials a year and meets with customers to make sure that they get the type of funeral they wish for. A couple of people have already signed up for green burials, she said. Perkins said regulations mostly regard cemeteries, as they need to follow the rules set out by the state’s funeral board and the municipality.

Perkins has spoken to people at Meeting House Hill, a cemetery in Brattleboro, about setting aside land for green burials. The area would be part of the current cemetery, and there would be grass and flowers. A natural walkway that can be marked is being considered. Exactly how that might work is not clear yet, but GPS might be an option, Perkins said.

Sehee, of the Green Burial Council, is skeptical about the need for legislation. His organization has weighed in on potential legislation in other states, but has not been contacted by the Vermont Legislature.

He said other entities have found it unnecessary to go beyond the verifiable standards set forth by the council. The standards are used by 350 of what he calls “approved providers,” in 42 states and in six Canadian provinces.

Sehee is concerned might happen if the Legislature gets it wrong is that consumer alliance groups just found a “cheap way” to get rid of bodies and that natural burial grounds won’t hold the promise that they have given family members. That is to make sure that the natural reserve will stay as it is for many years, and not be sold or developed into something else.

The council’s program of compliance involves established land trusts that serve as “eyes on the ground,” and sets forth and continues to evolve standards with input from experts in fields such as sustainable landscape design, restoration ecology, conservation management and consumer affairs, Sehee said.

At Guare & Sons Funeral Home, Boucher is not worried that the latest trend might steal business. Seven out of 10 deaths are already cremations and the company has seen a steady decline in the use of embalming fluid, he said.

The latest burial data from the Vermont Department of Health from 2009 paints a similar picture. In 2009, 2,992 bodies were cremated and 1,441 were buried in Vermont.

As they have adopted to cremations, Boucher says he will adapt to any changes.

“We’re willing to work with the customer to give them whatever they want,” he said.

Correction: This story was corrected at 9:05 p.m. on Sunday, Aug. 18, 2013. Mary Alice Bisbee is a member of the Funeral Consumers Alliance of Vermont, not its information officer. The Vermont alliance has taken no position on H.83; the story originally said the group supported the legislation. The film “Dying Green” is not sponsored by that alliance.

Thanks for reporting an error with the story, "Natural ending: As interest in ‘green burial’ grows, fune..."

By Erin Petenko and Mike Dougherty