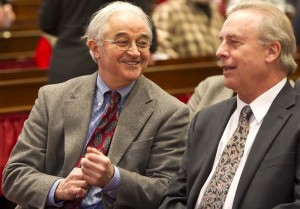 State Auditor Doug Hoffer visited the House Government Operations Committee on Tuesday with a request: He wants to protect the identities of state employees who pass on information or tips about problems within state government.

Commonly known as "whistleblowers," the identities of state employees who suggest avenues for further investigation, or who provide information about serious fraud or wrongdoing, are not protected under any state laws, Hoffer told VTDigger.

Hoffer said he couldn’t protect the name of a whistleblower even if he wanted to, because no law now provides him such authority. And if government records are presumed to be public records unless they’re specifically exempt, names of whistleblowers could be unearthed via public records requests.

“I think it’s odd that there is no specific whistleblower protection today,” he continued.

“That’s unbelievable; that is unbelievable,” committee members murmured. One lawmaker said that she’d already received emails from two constituents, complaining about the lack of protection.

But existing state statute does protect state employees, at least, from direct retaliation for reporting on “waste, fraud, abuse of authority, [and] violations of law,” without necessarily protecting their identities.

Even if there’s immunity from retaliation, merely revealing the identity of whistleblowers could potentially chill an atmosphere of open dialogue and prevent whistleblowers from coming forward, Hoffer said.

“Anything that tends to limit or prevent whistleblowers should be considered a problem,” he wrote in an email to VTDigger. “It’s impossible to know if (or the extent to which) disclosure has a chilling effect but it’s not unreasonable to assume that it does.”

Assistant Attorney General Bill Reynolds broadly confirmed Hoffer’s reading of the law. He said that although there could be indirect ways to shield identities using other laws, there’s no explicit provision protecting the names or personal information of whistleblowers.

Rep. Donna Sweaney, D-Windsor, who chairs Government Operations, told VTDigger she wants more time to give this issue its full airing, so the topic won’t be discussed this session. She called the issue “too complicated,” leaving it as a topic for another year.

Hoffer welcomed pushing back the debate for now, telling VTDigger: “If it’s to be done, it should be done well the first time.” He’s dropped his request for now.

Hoffer originally requested protection only for state employees, but added that it’d be reasonable to broaden protection, to include others who may have information or an interest in clean state government.

“We want all whistleblowers in good faith to come forward, not just state employees. And that could include, for example, employees of grantee organizations, or sub-recipients,” Hoffer told the committee. “There’s a lot of folks down the chain from where the money starts.”

According to Allen Gilbert, director of Vermont’s American Civil Liberties Union branch, this debate isn’t new. Legislation related to whistleblowers surfaced in 2004, 2008 and 2011, passing only in 2008, which resulted in the current laws protecting state employees.

“Some state employees were tussling with their bosses in the Douglas administration about their right to speak out on certain issues,” said Gilbert, recalling the history of S.201 back in 2008.

“Frankly I’m wondering: Is it always possible to protect a person’s identity when they’ve blown the whistle on a government practice? ... I would think, especially in a small state like Vermont, it’s pretty easy after a while to figure out who has been speaking out about something,” said Gilbert.

Thanks for reporting an error with the story, "Auditor proposes identity protection for whistleblowers"