Editor’s note: This story is by Nancy Price Graff, a freelance writer and editor from Montpelier. In This State is a syndicated weekly column about Vermont’s innovators, people, ideas and places. 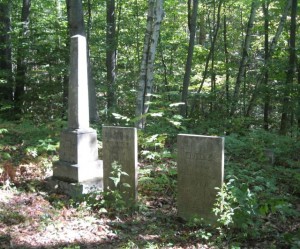 A close-up view of headstones in the Johnson Cemetery in Waterbury. As the leaves fall, the old graveyard will once again become visible from the interstate. Photo by Nancy Price Graff

Every cemetery has its stories. This is a story of dreams, skullduggery, valor, and the unintended consequences of progress. Almost everyone who plays a part in the story is dead, and very few people still living know enough of the story to tell it other than in bits and pieces. And yet the story of the Johnson Cemetery in Waterbury is tangible and present, preserved in an isolated clearing in woods south of the village center and visible from the Interstate for a fleeting second or two whenever the leaves are off the trees.

Forgotten by almost everyone, the Johnson Cemetery occupies a small knoll pinched between the railroad and the interstate. Only the first person buried there, Priscilla Bassett, who died in 1840, has ever had a moment’s real peace in that spot.  Nine years later railroad tracks were laid just south of her grave, and by 1853 when Priscilla’s 93-year-old husband Zachariah joined her, trains were running daily and often between points north and south. Within a quarter mile of Bassett’s grave, the tracks twice crossed in quick succession the prosperous farm of Elijah Johnson, the Bassetts’ son in law. Several times every day trains approaching Johnson’s Crossing blew their whistles loud enough to raise the dead as a warning to clear the tracks.

A century later highway workers came through blasting apart ledge and paving the wide swath cut by the federal highway system. Some large government projects have paid to relocate much larger cemeteries, but no one moved the Johnson Cemetery, which by now contained approximately 33 graves, the last one dating from 1912 for Clitus Johnson, who, ironically, had been hit by a train at Johnson’s Crossing while traveling by wagon from the family farm to the village of Waterbury. Drivers traveling south on the interstate should look for the merest jog in the highway east of Waterbury. That jog is the highway builders’ respectful concession to this hallowed ground.

The Johnson Cemetery is just one of six abandoned family cemeteries in Waterbury, some of which contain a single grave. Even abandoned cemeteries, however, have their part to play. Regardless of how time has uprooted or dispersed a family or ended its line completely, old burying grounds root a town like tent pegs, holding its history in place.

“These are the folks who made our town. They should be respected for what they did for our town. They built it,” says Jack Carter, a member of the town’s Cemetery Commission. He adds, “It’s our responsibility to look after these abandoned cemeteries.”

It’s a charge the commission takes seriously even when there are limits as to what can be done and the graveyard itself has been become almost inaccessible. Carter credits the Masons for keeping the brush down in and around the Johnson Cemetery. The American Legion supplied the small American flags that flutter next to two of the stones, one marking the grave of a Revolutionary War veteran and the other the grave of a Civil War veteran. No one alive remembers who planted the nearby cast iron GAR medallion. It’s encrusted with rust, although the lettering is still clearly legible. Many people would not even know that GAR stands for the Grand Army of the Republic, the fraternal organization formed in the wake of the Civil War to honor its veterans.

“It’s history. That’s the way I feel about our old cemeteries. It’s our history,” says Linda Kaiser, an active member of the Waterbury Historical Society.

But not everyone shares Kaiser’s respect for old cemeteries. In 2007 someone attempted to rob the grave of Lovina Noyes, who died on Nov. 15, 1864 and was buried in the Johnson Cemetery. Someone else who hiked in to the cemetery discovered a three-foot-deep hole in front of Noyes’s stone. The police investigated, but found no bone fragments and nothing to suggest that anything was taken. The gravesite was restored, and today Noyes’s grave is covered with ferns and leaf litter, indistinguishable from any other grave in the cemetery. But the feeling of violation remains.

The vandalism continued. In May of last year Mark Backus, the great, great, great, great grandson of Zachariah Bassett, came up from Bristol to see for himself where so many of his extended family rest. An avid genealogist, he could tie together across generations, through marriages and children, the Johnsons, the Bassetts, the Elmers and Grovers, the Jewetts, the Noyes, and the Woodwards, all of whom once shared this corner of Waterbury, lived their lives there, blended their bloodlines, and died there. He especially wanted to see Zachariah’s headstone, which displays not only the man’s name and death date but a summary of his service in the colonial army, including the four years he spent as a prisoner of war in England before being repatriated in a prisoner swap at the end of the war.

The stone wasn’t there. Someone had broken off the tablet and carted it away. All that was left was a line of jagged white marble that pokes through the ground like a tooth snapped off at the gum line. 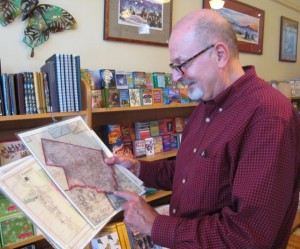 Jack Carter, a member of the Waterbury Cemetery Commission, points to an 1853 map showing where the families buried in Johnson Cemetery had their farms. Photo by Nancy Price Graff

“This was one of the most significant Revolutionary War headstones in Vermont,” Backus says because of the story it told. He reported its loss to the police, but without any leads, the case has gone cold. Backus hopes that someone will recognize the stone from photographs of it that appear on the Internet and return it. “It’s of more than local interest,” Backus says. “It’s a state treasure.” He, Carter, and Kaiser all want to see it restored to its place with the other stones in the Johnson Cemetery, even if very few people will ever see it there.

Beeches, birches, oaks, and maples reaching for the sky today surround the Johnson Cemetery, which is approximately half the size of a basketball court. Overhead their branches intersect like the ribs in a vaulted ceiling. Underfoot, ferns, pucker brush, and moss carpet the ground. In the late afternoon, sunlight filters through the canopy overhead in transcendent streams. The effect is reminiscent of a medieval cathedral. Headstones list from a century of deep frosts, but the scene is remarkably unchanged across the past 150 years.

The only discordant notes come from the whine of cars whizzing by on the interstate, just uphill and out of sight, and the rich aroma of roasting coffee beans wafting in from nearby Green Mountain Coffee Roasters.

Soon, all the leaves will be off the trees and once again the seasonal window will open. For six months anyone southbound on I-89 will have two seconds to glimpse the Johnson Cemetery, one of Waterbury’s tent pegs, a special site that helps hold not just the town’s but Vermont’s history in place for coming generations.

Nancy Price Graff of Montpelier is a freelance writer and editor.

Thanks for reporting an error with the story, "In This State: A long forgotten grave site in Waterbury marks history"