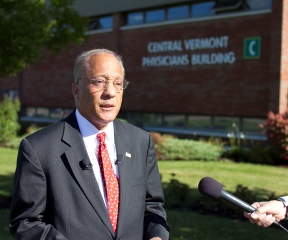 Vermont may be a great place to live, but Randy Brock, the Republican candidate for governor, says it’s a less than ideal locale to run a business.

As Brock outlined his economic plans to reporters in Williston on Monday, he rattled off a litany of unflattering economic statistics: Vermont has been cited as the fourth worst place to retire, with the 47th most unfriendly business climate and with the first, second or third highest tax rate in the country, according to national finance magazines.

“Most Vermonters recognize that Vermont is a really, really tough place to do business,” said Brock. “All of the national surveys that we see raise questions,” he continued, citing surveys by publications like Forbes, which rated Vermont as among the worst places nationally to do business.

His solution to what he sees as the state’s economic woes? A cold, hard dose of reality. The foundation of Brock’s economic development policy is laid on the bedrock of smaller state government.

“My goal is to shrink state government not to increase it,” Brock said. Government, he said, must live within its means.

“We have to look at Vermont with reality and look at ourselves without rosy-colored glasses,” Brock said. “By recognizing what our issues are, we can make changes. We need to lower the cost of doing business, lower taxes, lower energy costs, lower the cost of health care. Yes, I know it will be tough, but we need to recognize we need to do these things, or we’ll never do them.”

A third of Brock's proposals consist of new initiatives including: an action plan for attracting a Fortune 1000 company to the state, an improved “Made in Vermont” program, a new “department of innovation,” better science and math education, a “business in a box” ready to launch package of franchises businesses for unemployed Vermonters, and a renewed state investment in overseas recruitment of investors in the EB-5 visa program.

The state senator from Franklin County said 25 percent of the state’s workforce will be retiring over the next five years, and now is an ideal time to reduce the overall size of state agencies and improve government efficiency. The anticipated mass retirement of baby-boomer-aged workers, he said, creates an opportunity for the governor’s office to “re-engineer” the core state government functions while reducing its size and the amount of taxes the state needs to raise to support it.

“This is the ideal time to make those kinds of changes without mass layoffs,” Brock said. “I want to make government more efficient by breaking through silos and cutting across organizational lines. We can reform the way we do business in state government by making it more efficient, less costly and put more people on the front lines so Vermonters can get better service.”

About 29 percent of state employees will become eligible for retirement over the next five years, according to Jeb Spaulding, the secretary of the Agency of Administration. There are about 7,800 full-time employees in state government.

Brock says across the board, 4 percent cuts are “the worst way to manage an organization."

“It forces you to do everything in a mediocre fashion,” he said.

Instead, Brock wants to “force rank” government functions by their importance, with an eye to eliminating less useful functions. “Protection of life and property” he said would be state government’s probably top priority. Second in line would be services for the state's most vulnerable.

Brock says he also wants to “end crony capitalism” and the “renewable industrial complex,” i.e. state subsidies for renewable energy. His plans to re-engineer state government include the possible elimination of the state’s Clean Energy Development Fund and the standard offer program for solar and wind projects. Brock would institute a moratorium on industrial wind.

Brock portrayed the election as a “choice between two directions,” arguing that unbridled spending and dependency on government had driven businesses out of Vermont, and that he could help reverse the course.

“The differences between Governor Shumlin and I could not be more stark,” claimed Brock. “We have an actual plan to restore our economy. Gov. Shumlin does not.”

The Republican painted a picture of a state that has a culture of growing dependency on state services in which Vermonters are “entangled in safety nets.” He wants to use the safety net “as a trampoline so people can bounce up.”

Brock bristled when reporters asked whether the governor's moniker for the state senator, “pessimist in chief” was appropriate. Brock insisted he was optimistic about the future and he was merely citing statistics from news reports. “I didn’t write it,” Brock said. “I don’t own it.” When pressed, he said he believed the data.

“I also believe if I didn’t believe it I wouldn’t be here,” Brock said. “Vermont is great place to live.”

Members of the Shumlin administration defended the governor’s record on government efficiency and employment levels.

Alex MacLean, the governor’s campaign manager, said the Shumlin administration is “already looking to eliminate inefficiencies and make state government as efficient as possible. Again, it’s easy to talk in platitudes, but I’d be interested in exactly which jobs he proposes to eliminate.”

Brock’s claim that Shumlin lacks an economic plan is “absurd,” she said. The governor has tried to reduce health care costs and connect Vermonters to broadband, she said. Shumlin also launched the Bring it Back to Vermont jobs initiative earlier this summer.

MacLean pointed to two state balanced budgets without new broad-based taxes, the creation of “thousands” of jobs, and a universal and affordable health care plan.

Spaulding said: “We are several hundred employees lighter than we were five years ago. On the one hand, [Randy] likes to criticize us for having too much overtime: on the other, he’ll cut 700 employees.”

“We’re all about delivering quality service in the most economical and low cost way we can,” continued Spaulding. “Unless the senator can identify what work he doesn’t want to get done, like who is going to wait  longer for a permit, or what families are going to wait longer for their services for their disabled child, it’s not one that I can take very seriously.”

Until then, argued Spaulding, Brock’s emphasis on reducing inefficiency by consolidating state employees remained “just a gratuitous statement: like, I’ll have my cake and eat it, too.”