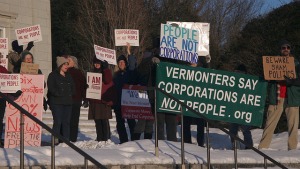 Protesters rally against the Citizens United decision at the Statehouse in Montpelier. Photo by Rob Lehmert courtesy of Public Citizen.

Two court decisions — one last week from a federal judge in Vermont and one Monday from the U.S. Supreme Court — could mean the emergence of the new type of political action committees dubbed “super PACs” in Vermont.

Under U.S. Supreme Court precedent, super PACs, which do not make contributions to candidates, parties, or other political committees, can accept unlimited contributions from individuals, unions and corporations (both for profit and not-for-profit) for the purpose of making independent expenditures. Vermont, whose campaign finance laws are stricter than federal laws, has not seen the type of super PAC activity that is widespread in national politics.

But the two recent decisions could change that.

On June 21, U.S. District Court Judge William Sessions dismissed a case brought by the Vermont Right to Life Committee against Vermont Attorney General William Sorrell. His opinion upheld Vermont campaign finance laws relating to reporting requirements for political committees or “PACs.” However, Sessions found the group was subject to the contribution limits because it was so closely intertwined with another group created by the Vermont Right to Life Committee that spent money to influence specific campaigns.

In an 80-page decision, Sessions discussed why a subcommittee created by the Vermont Right to Life Committee had to conform with identification and disclosure requirements in Vermont law. The judge also held that the group was subject to the $2,000 contribution requirements. Under Vermont law, any political committee — meaning a group that spends more than $500 to influence a specific race or ballot issue — can only accept up to $2,000 from any specific source. Groups that make “independent expenditures,” not related to any particular race, are not subject to those limits, at least at the national level under a case called Citizens United v. Federal Election Commission.

In the Vermont Right to Life Committee case, the Vermont attorney general argued that the state could impose the contribution limits on independent expenditure-only groups, but Sessions’ decision did not address that question, leaving it for another day. In his decision, however, Sessions noted that the state would have a difficult time upholding such limits on a group that is not connected to a specific campaign or ballot issue.

“Federal courts to address the issue since Citizens United have emphasized that because independent expenditures cannot corrupt, governments have no valid anti-corruption interest in limiting contributions to independent-expenditure-only groups,” the decision states.

Sessions went on to note the high bar Vermont would face defending such a challenge.

Even though Citizens United applies to Vermont, Sorrell said, it is still an open question whether the state can impose contribution limits for groups that make independent expenditures since the Vermont case did not address that argument.

“Judge Sessions did not have to reach the issue of a contribution limits on the part of a political committee that legitimately is independent and does independent expenditures,” Sorrell said. “That issue is left unresolved by this case.”

With the legal landscape appearing to open the door for super PACs in Vermont, some advocates are already considering taking the first step.

Bob Stannard, a lobbyist and chair of the board of Vermont Priorities, said he had suggested to the board of the 501(c)(4) nonprofit organization that it look into forming a super PAC in Vermont. 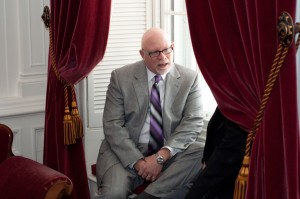 The group already has a federal super PAC called Americans for a Better Tomorrow, Today. The committee claims its focus is “to elect political leaders willing to address the serious social and economic issues being faced by the 99 percent.”

Stannard said he doesn’t like the idea of big money influencing elections.

“I don’t support having an obnoxious amount of money in politics,” he said.

He said if monied interests are going to try to “buy” politicians, there should be a counterbalance to point out the “inaccuracies that are being perpetrated by the other side.

“Basically what we are saying is that I highly recommend that we go forward and form a super PAC here in Vermont if for no other reason that the other side is going to,” Stannard said.

Todd Bailey runs the new campaigns division at the lobbying firm KSE Partners. He helped Stannard get the federal super PAC started, and he said the combination of court rulings provide a strong indication that there will be state super PACs in Vermont soon.

“I think the ruling from Judge Sessions and the ruling today from the Supreme Court on the Montana case make it clear that we are going to see super PAC committees in Vermont and possibly this election cycle,” he said.

Thanks for reporting an error with the story, "Campaign finance decisions could mean start of super PACs in Vermont"