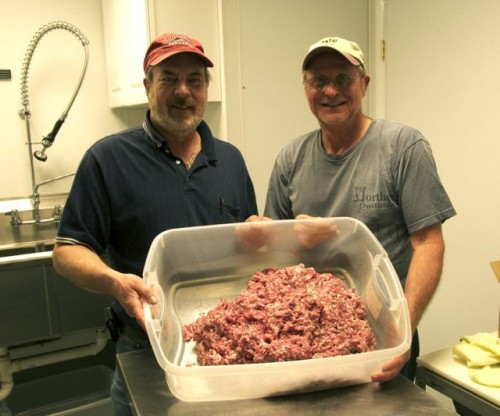 Randy Reynolds and Larry Beede hold up a vat of freshly ground pork that will soon become a variety of Ping's Sausage. Photo by Dirk Van Susteren

In This State is a syndicated weekly column about Vermont’s innovators, people, ideas and places. Details are at http://www.maplecornermedia.com/inthisstate/.

According to Ping Puente, Mario Rossi was the first with the recipes. He either developed them, or they were handed down to him from a friend or relative. He may have brought them to Barre when he emigrated after World War I from a part of Switzerland that was largely Italian.

Ping says Mario made the sausage in the back of Rossi’s market on Berlin Street. It was once one of probably a half-dozen neighborhood groceries that made their own sausage in Barre’s North End, the Italian section.

Ping, 81, remembers Rossi making the sausage in a wooden tub in the kitchen of his home, to which the store was attached. It was a lively little market, with a bell above the door to tell the Rossis when customers had entered. Ping remembers the fresh pears, apples and tomatoes that were stacked appealingly in the produce bin and the kids who played out front and the old men who gossiped and argued politics near the store’s entrance.

One thing Mario could do, he could make sausage. He passed his recipes on to his son, Raymond, who wound up with his own store, Bud’s Grocery, on North Main Street, just down from the Times Argus newspaper office. Raymond sold all kinds of imported Italian goods — pastas, sauces, olives, you name it — but one thing he did best, in a back room, was make the sausage: luganiga, salamini, zampet, vaniglia and mortadella.

The meats were so good that Richard Dente, now 65, would occasionally leave his own store just down street to head over to Bud’s Grocery to buy the sausage to take home for dinner.

Ping was in line after Raymond for the sausage-making. He had heckled Raymond for years to get the recipes, which he says he paid good money for (won’t say how much), so that he could start making and selling the meat from rented space at a Barre company called Cottage Street Pasta.

Ping had been a loan officer at the Northfield Savings Bank and had long been active in hockey programs in the city, so he was known about town and had a ready market.

He religiously protected the recipes for what had then became “Ping’s Sausage.” His copies of the recipes, he says, were in pencil and written by Mario or maybe Mario’s wife. “I kept them in the safe,” Ping confides.

“I would have gone to the grave with those recipes,” he adds, had he not sold them three years ago to their current keepers, Randy Reynolds and Larry Beede, Ping’s nephew, two old friends from high school, class of ’73.

All three were sitting around a campfire at Ping’s camp on Lake Seymour, where they fished lake trout and small-mouth bass and hunted rabbits, when the conversation turned to sausage making and that fact that Ping couldn’t spend the rest of his life making sausage, or maybe that he could, but regardless, it might be a good time for him to sell.

So a deal was struck, and now Randy and Larry have the secret recipes.

The pair added three other sausage recipes to the original five, a “sweet Italian,” a “hot Italian,” a “Sicilian” in addition to Ping’s own creation, a chorizo. They kept Ping’s name on their labels, because “why fix something that isn’t broken,” says Randy.

When asked about ingredients, he reluctantly mentions “salt, pepper, garlic, wine, Parmesan.” He doesn’t cite proportions, or what spices or herbs might go into which sausages. “No fennel in the luganiga,” he says, but then clams up.

Larry and Randy now make Mario’s sausage out of a spotless room that could be a surgical suite in the back of Randy’s Brookside Country Store on East Montpelier Road. There they cut 20-pound slabs of pork into quarter-pound pieces, run them through a grinder, add the special ingredients, and make the links, up to 80 pounds weekly, and sell them to two restaurants and from the Brookside Country Store.

Beede is asked which sausage is his favorite and how best to prepare it. “Zampet and salamini are pretty good when deer hunting,” he says. “But luganiga is my favorite. … I fry it with olive oil and onions.”

Ping remains involved and not just in name. On a recent day he is helping at the stainless steel stuffer as the spiced-up ground pork is squeezed into zampet casings. The results are huge links, looking to be about two-thirds of a pound each. Ping says that at home he boils zampet and puts slices on crackers as an hors d’oeuvre.

Randy recognizes that sausage making is an important part of Barre’s food culture that harks back to the late 19th century when many hundreds of Italians began arriving, mostly from northern Italy, to cut and sculpt granite from the local quarries. Seems they also cut and sculpted meats.

Mari Tomasi, the novelist, who was once the city editor of the Montpelier Evening News, wrote reverentially about the foods of Barre, using an example of one Barre woman’s cooking as splendid evidence.

The many appetizers leave the novitiate agape. Paper thin slices of prosciutto, a ham processed in pepper and spices. Large red wafers of tasty salami. Pickled veal. Celery. Ripe olives, the dark succulent meats falling away from their existing pits.

Then the favorite antipasto, a savory achievement incorporating mushrooms, pearl onions, tuna, anchovies, broccoli, all permeated and tinctured with a tangy red sauce.

And those were just the starters.

These days traditional Italian food is served regularly at Barre’s Mutuo Soccorso, the Italian men’s club; and six times a year, the organization, of which Randy is president, holds a “Sausage Night,” at which upwards of 200 pounds of “Ping’s Sausage” are served with mounds of mostaccioli or polenta.

“Definitely I feel we are upholding an old tradition,” says Randy. “There used to be many places in the area that made various sauces and sausages, and now sausage-making has become a dying art, (but) we are helping to keep it alive.”

Well, perhaps he and Larry would then want to reconsider their reluctance to share their recipes. How about it? After all, sharing any recipe would help assure its immortality.

“Yes, we could tell you the ingredients,” says Randy. “But then we will have to shoot you.”

Dirk Van Susteren of Calais is a freelance editor and reporter. Thanks for reporting an error with the story, "In This State: Of memories, sausage and the secret recipe"

ECFiber secures $11.8 million of new funding to accelerate its work in many of its 31 member towns

Dan DeWalt: How about a graceful exit for obsolete Democrats?