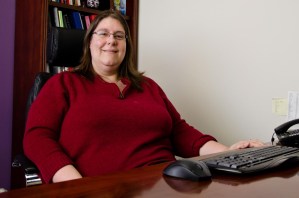 Disability groups oppose “end of life” legislation that would enable patients with terminal illnesses to use prescription drugs to commit suicide. Last month Disability Rights Vermont and the Vermont Center for Independent Living unveiled a survey that was designed to test advocacy messages and determine if Vermonters support or reject “physician assisted suicide.”
At a press conference, both groups stressed that 71 percent of the 400 registered Vermont voters who were polled by Smith Johnson Research agreed with the assertion that “the issue of physician assisted suicide should not be a priority in our Legislature this year.”

The controversial legislation, also known as the Death with Dignity bill, however, appears to have “overwhelming” support, according to the survey. Fifty-one percent of Vermonters approved of the physician assisted suicide, while 41 percent were opposed.

Sarah Launderville, executive director of VCIL, said the disability community is concerned about how the law would affect the ability of low-income Vermonters with disabilities to maintain access to adequate health care. The legislation she said in a statement doesn’t include “safeguards for people in vulnerable situations.”

“With too many uncertainties and risk around physician-assisted suicide, VCIL stays committed to continue the fight against this becoming public policy,” said Launderville.

It would appear that for the time being the state Senate has little interest in taking up S.103, even though the bill has 11 sponsors, or more than a third of the Senate. Sen. Dick Mazza, a leading conservative Democrat, is adamantly opposed to the provision, and last year Senate President Pro Tem John Campbell appeared to have little appetite for pushing the legislation forward. This is the second time lawmakers have introduced a “patient choice” bill. The first proposal in 2007 failed.

Dick Walters, president of Patient Choices Vermont, a political action committee and lobbying group, said in a statement: "Interestingly, both this poll and a Zogby International poll done earlier this year show strong support for a Death with Dignity law in Vermont. The opponents' attempt to parse the issue with 'inside Montpelier talk' hides the fact that Vermonters across all demographics, including those with disabilities, support the effort to have choice at the end of their lives. As the Governor has often stated, the legislature and his administration have the ability to deal with more than a narrow group of issues each year."

The Occupy Vermont movement is planning to “occupy” Gov. Peter Shumlin’s State of the State address on Thursday. The “peaceful and non-disruptive action” starts with a gathering at 1 p.m. on the Statehouse steps before members of the group “line the walls” of the House Chamber and use hand signals “to give instant feedback on what we hear,” according to a Facebook post from Montpelier resident Bethany Pombar. Occupy members are encouraged to wear green and sport a message for the governor on their shirts. The local group plans to livestream the event at occupycentralvt.org.

The state has supplemented a shortfall in Low Income Home Energy Assistance Program with money from the state’s weatherization fund, which helps low-income Vermonters use less fuel to heat their homes.

Gov. Peter Shumlin and legislative leaders announced last week the state would add $6.1 million to the LIHEAP program to make up for a shortfall in federal funding. Of the total state funds, $5.1 million came from money the Legislature set aside in anticipation of federal cuts. The other $1 million came from the state weatherization program.

Some low-income advocates question the logic in taking money from one low-income assistance program and giving it to another.

“I want low-income people to be taken care of, short-term and long-term,” Schlegel said.

Liz Schlegel, community outreach director for Central Vermont Community Action Council, said her organization will push to keep funding for weatherization assistance. A gross receipts tax on non-transportation fuels funds part of the program. An increase in that tax is one possibility.

Not many pols in Washington take a constitutional amendment to eliminate the notion of corporate personhood as seriously as Sen. Bernie Sanders, I-Vt., does. After all, the junior senator has made America’s corporatocracy the familiar whipping boy of his foments on monied interests for as long as he’s been in Congress.

And what better venue than Comedy Central for venting his spleen on all things big business? Sanders will appear on the Colbert Report Tuesday night to talk about his proposal to restrict corporate campaign speech rights. His proposed constitutional amendment (Saving American Democracy Amendment) would reverse Citizens United, a landmark 2010 U.S. Supreme Court decision that permits companies and unions to spend as much as money they want on campaign ads.

The Saving American Democracy Amendment does not prevent unions from using the dues and donations of their workers, however, although it would subject their political activities to laws limiting spending and expenditures.

Proposing an amendment to the Constitution of the United States to expressly exclude for-profit corporations from the rights given to natural persons by the Constitution of the United States, prohibit corporate spending in all elections, and affirm the authority of Congress and the States to regulate corporations and to regulate and set limits on all election contributions and expenditures.

Resolved, That the following article is proposed as an amendment to the Constitution of the United States, which shall be valid to all intents and purposes as part of the Constitution when ratified by the legislatures o three-fourths of the several States within seven years after the date of its submission for ratification:

SECTION 1. The rights protected by the Constitution of the United States are the rights of natural persons and do not extend to for-profit corporations, limited liability companies, or other private entities established for business purposes or to promote business interests under the laws of any state, the United States, or any foreign state.

SECTION 2. Such corporate and other private entities established under law are subject to regulation by the people through the legislative process so long as such regulations are consistent with the powers of Congress and the States and do not limit the freedom of the press.

SECTION 3. Such corporate and other private entities shall be prohibited from making contributions or expenditures in any election of any candidate for public office or the vote upon any ballot measure submitted to the people.

Just before Christmas, Paul O’Toole, a homeless man with a drinking problem, died of hypothermia in Burlington. The former carpenter couldn’t stay in local shelters because of his substance abuse issues. He was found dead, lying on a heating grate, on Dec. 21, according to the Burlington Free Press.

O’Toole’s death reignited debate about whether the state should offer “wet shelters” for people with drug and alcohol problems who live on the street. Last week Gov. Peter Shumlin told reporters he would explore the idea.

The video was shot by Morgan Brown.

Thanks for reporting an error with the story, "Digger Tidbits: Survey results mixed on “end of life” bill; Occup..."