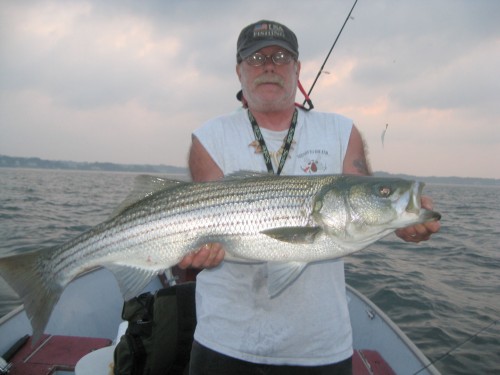 Dennis Jensen is the outdoor editor of the Rutland Herald and Barre Times Argus and a member of the board of directors of the New England Outdoor Writers Association.

My pal Jim was headed out for an afternoon of bass fishing one recent afternoon.

He didn’t ask if I wanted to go along and, to be honest, that hurt a bit.

But I understand why Jim didn’t want me to accompany him on his high-speed bass boat.

Jim knows about what has transpired over the past decade or so — I have lost the passion. I no longer look upon Lake Bomoseen as the place I most want to fish. And it has nothing to do with the lake, a splendid, 13-mile-long body of water where largemouth bass up to 10 pounds surely lurk.

More than 20 years ago, my wife and I started a summer ritual — first a long summer weekend and then a week, lounging along the coast of Maine. After a while, we scraped up enough money so that, over the past decade, we spend two weeks in Maine — one in July and another in August.

We adore Maine. In fact, if I didn’t live in the land that boasts a fiery, independent senator, delicious, cold winters and a natural beauty that beckons over all four seasons, we would move to Maine.

Over the years, I couldn’t help but notice that, after the magic hour of 5 p.m., fishermen began to trickle down to the beach, their long surf rods in one hand and a bucket in the other. I knew why they came here, casting out their lines and sticking the butts of their poles into sleek sand spikes.

They were after striped bass, a fish I had grown familiar with during my dark, earlier years, growing up in New Jersey.

So I decided to bring my old surf rod and some tackle and give those Maine stripers a try.

It was a true turning point.

Striped bass are incredible fish. Along the surf, fishing for stripers demands a good deal of knowledge about their behavior.

When hooked, stripers put up a big fight and, filleted and cooked over a grill, they make great table fare.

Some five years ago, I set out one night — I fish for stripers almost exclusively during the hours of darkness — and landed several fish. About an hour after high tide, I hooked into a good one, about 25 inches long, and decided to take it back to our camp, just two blocks from the beach.

The man who owns the camp, a Vermonter incidentally, is also a striped bass fisherman. I marvel at his basement, which is lined with fishing rods, old plugs, an assortment of striper gear and — get this — a sink where you can clean your catch. Sometimes I’ll smoke my cigars down there, listening to the Red Sox on the radio, while going over my fishing plugs, sharpening my treble hooks and awaiting the incoming tide.

Anyway, I carried my catch back to the camp and set about to clean the fish. I then noticed this “thing” protruding from his belly. It was a tag.

Had I noticed the tag in the darkness on the beach, I would have snipped the end off and released the fish. But it was long dead by the time I got back to camp, so I filleted the striper and, after returning to Vermont, went to the Internet and learned that it had been tagged at nine inches in the Hudson River, in New York, seven years earlier.

I waded into the surf and gently swayed the striper back and forth, holding it in both hands. A moment later, it bolted from my hold and was gone.”

Up and down the coast, state laws mandate how big a striper must be to be legal. Maine has a curious law. One fish per day (that is just fine with me; most of the legal fish I catch go back to the water ), with what is described as a slot limit; that is, a fish must measure between 20 and 26 inches or over 40 inches to be legal.

I have learned, over the years, that I am not alone among Vermonters who have the same “problem” I have — a passion for striper fishing.

Con Hogan, Steve Wright and Vermont Fish & Wildlife Commissioner Patrick Berry are some of the familiar-sounding names of Vermonters — men and women who travel to the coast every spring, summer and fall to fish for stripers.

While my greatest passion for striper fishing is found right at the water’s edge, every September I travel to Cape Cod to fish with Randy Julius, a fellow writer out of Massachusetts, and fish Cape Cod. Fishing from his 18-foot boat, we troll, cast flies, and fish with lures. The fish we find are bigger and the action is far greater than fishing from the surf.

But it is right at the water’s edge where the challenge is greater,  and the experience best — that huge red ball breaking over the horizon at the right tide, the cool breezes mingled with cigar smoke and the peaceful tranquility of being totally alone until you are jarred into the present by a rod tip bent at nearly 90 degrees.  That’s what makes striper fishing along the surf the lure that it is.

If you want to get into the best striper fishing, it can be found somewhat south of Maine, notably along the coast of Massachusetts and south of there.

Fishing is more difficult along the coast of Maine. Some nights I’ll fish my normal routine — two hours before high tide to about 90 minutes after. On more occasions than I’d like to admit, I’ll go the entire evening without a hit.

One night, a few years back, I arrived on the beach at about 1 a.m. About 45 minutes before high tide, I could feel the tip of my rod jerking gently. It was smaller bass, unable to take the huge glob of clam that was baited on the hook. They merely tugged as small bits of clam. Just wait, I told myself.

A few minutes later, the rod tip jerked violently toward the sea. I set the hook and then held on, as the drag (which allows a fish to take out line) began to sing. I was on to a good fish.

Perhaps a minute later, I walked down to where the waves crashed upon the beach and reaching down to grasp the fish’s lower lip, carried the striper to dry land. I removed the hook from its lower jaw, then I took the measuring tape from my front pocket. Thirty-one inches.

I waded into the surf and gently swayed the striper back and forth, holding it in both hands. A moment later, it bolted from my hold and was gone.

I hooked, landed and released eight stripers that night, measuring from 23 to 31 inches. Another fish, measuring 25 inches, was set aside for dinner later that day.

An hour after the tide had turned, it was time to go. I was exhausted.

So I gathered up all of my gear — two surf rods, a bucket of bait, a backpack complete with bottled water, a tackle box containing my bait-fishing tackle and another with an assortment of plugs, two headlamps, two sand spikes and a lawn chair —and my striper.

As I made my way back, with a sliver of a moon over my shoulder and lesser waves yet beckoning, it occurred to me that I was probably the only human on that long stretch of sand.

I could just as well have been some ghost of a fisherman, wearily making his way along the darkened beach. Thanks for reporting an error with the story, "The lure of striped bass"

All Vermonters 16 and older eligible for Covid vaccine starting Monday

Ross Connelly: All lives will matter when more than white lives matter

Walt Amses: Springtime daydreams about gardening and the Grateful Dead