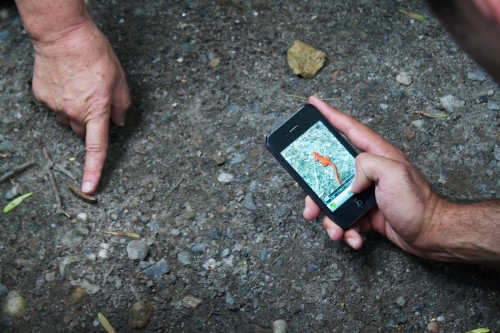 Many naturalists would consider a nature walk featuring cell phone use a failure, but Yasser Ansari sees it as a success. The 20-something founder of Project Noah, a digital app “to help people reconnect with nature,” smiled as he saw group members taking snapshots with their smart phones on the ‘Digital Nature Walk’ that was part of the Woodstock Digital Media Festival on Saturday.

The app, which is free on most smart phones, allows people to photograph organisms they find in nature and upload them to a database, where other users can comment and help to identify the organisms. It also uses location tracking (if the user allows) so the database can become a real-time tracker of organisms. This feature, Ansari says, could be a valuable asset in the tracking and containment of invasive species.

The walk fit right in with the festival’s theme: “Out of Place.” It explored the use of geospacial apps such as Project Noah and Green Mountain Digital, a Vermont company that has created digital apps for Audubon and Orvis, as well as other digital projects in Vermont, including VTDigger.org.

The irony of taking a nature walk with a smartphone in hand isn’t lost on Ansari, but he says it’s an effective way of getting a plugged-in generation “hooked on nature.” He’s well aware of the critical opinion; Project Noah has come under fire for its imperfect information (users do not have to be knowledgeable about nature to participate) and its lack of scientific oversight.

Ansari doesn’t see the lack of barriers to his service as a failure. It’s his favorite part. When someone uploads a picture and calls it “big hairy spider,” he views this as a success. Not because of the scientific contribution, but because people who aren’t experienced are participating and having fun with nature.

“When I see stuff like that, I love it because that’s someone who’s never done something like this before,” he says, “but they found something that’s interesting, and they took the few minutes it takes to share that with the rest of the community.”

This new generation of observers is one that Ansari thinks can be brought to nature by technology instead of having to leave one behind in pursuit of the other.

“When they talk about tweeting,” Ansari says, “they’re not talking about birds, they’re talking about Twitter. And for that audience, this stuff is really resonating.”

The Woodstock Digital Media Festival brought together art, media and technology as it relates to the human user, the communities that form around these innovations, and what Vermonters are doing with them. Topics ranged from public art and community action to increasing broadband adoption around Vermont.

Thanks for reporting an error with the story, "Digital Media Festival joins technology with nature"