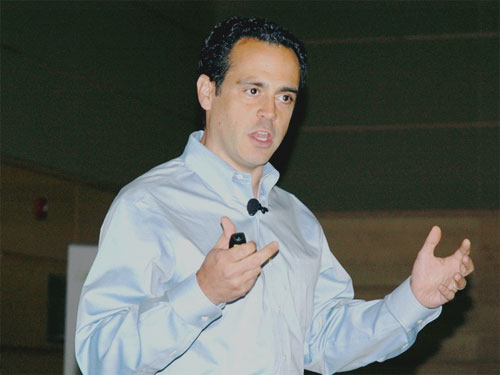 RANDOLPH CENTER – From Brattleboro to Newport, Vermonters came to Randolph Center Saturday to talk about how — and why — they wired up their towns with broadband.

At a daylong conference called “Citizen Leadership in a Connected Age,” townspeople, tech experts, broadband providers, community builders, and business, nonprofit and news leaders, gathered to discuss how “digital tools” can be used to benefit the Green Mountain State.

Some participants pointed to the Internet as a tool for re-creating a lost sense of community. Others said statewide access to broadband is essential if Vermont’s economy is going to survive in the 21st century.

The conference was sponsored by eight nonprofits overseeing the e-Vermont Community Broadband Project and it brought about 75 people together at forums to talk about the impacts of broadband, the obstacles, the costs and future uses, and the necessity to make broadband coverage universal throughout the state.

Mark Snelling, president of the Snelling Center for Government, which was instrumental in organizing the conference, said ensuring that Vermonters make the most of broadband access “is the significant most important thing we can do to increase the quality of life for Vermonters.”

Snelling’s comments were echoed by Paul Costello, executive director of the Vermont Council on Rural Development, which is working with 24 rural towns across the state under the e-Vermont project to develop new uses for the Internet that build community engagement, commerce, jobs and school innovation.

“Young people aren’t going to live where there’s no digital culture,” Costello said. “If Vermont is not one of those places, we’re going to lose vitality.”

E-Vermont director Helen Labun Jordan said Vermont was one of only two states to receive funding for a community broadband project under federal stimulus money, a significant feat. But as Google executive and former legislator Matt Dunne noted in the keynote speech, the sense of community is Vermont’s “secret sauce” and long a main ingredient in the state’s focus.

Karen Marshall, who was appointed in January by Gov. Peter Shumlin to head Connect VT and oversee an effort to make broadband  universally available in Vermont by 2013, said towns that don’t have good Internet access have developed community hubs that offer the service.

“We’re starting to see libraries emerge as a town center,” she said, because they often are key Wi-Fi hotspots in local communities. Local schools also often have broadband and are also willing to share the resource, she said.

A week ago the state launched a new interactive website, www.BroadbandVt.org, a crowdsourcing tool that will help the state identify dead spots in service areas and better plan for broadband expansion, she said.

Users can also test their Internet speed on the site, which Dunne told the conference is another critical area in which Vermont is lagging far behind. New mobile Internet uses are consuming more and more “bandwidth” and ensuring high-speed connections is essential to Vermont’s economic future, he said.

Josh Garza of GAW High Speed Internet, which has deployed nearly 1,000 Wi-Fi nodes across the state, said demand for “bandwidth,” essentially the size of the pipes that data streams through, is doubling every year.

Broadband is a “big driver for economic development,” said Townsend Belisle, founder of Wireless Woodstock. He was born in Woodstock, moved back to Vermont after 15 years in New York and began a successful, if at times frustrating, effort to wire the tony resort village, where debate raged over where to locate the small bland gray Wi-Fi signal boxes.

The town used a non-commercial model for Wi-Fi centered around the library, and eventually got businesses and town officials on board. Belisle said six months later the traffic on the network is “fantastic.” Mobile Wi-Fi is critical today for resort tourists and broadband a key for real estate sales to people who might think of settling in Vermont, he said.

Wi-Fi providers said new technology coming on the market will greatly improve the range and speeds of over-the-air connections to those who don’t have cable or DSL now, providing so-called “last mile” solutions with UHF wavelengths that penetrate trees and foliage much better than current technology. 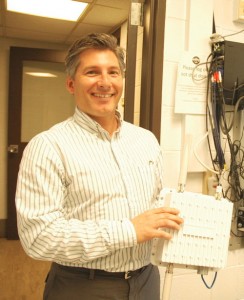 Al Levy, a UVM grad who grew up in Williston, is president of Summit Technologies in Williston, which provides wireless services to the state, resorts, hospitals and local governments. He said Wi-Fi is “critical” to the state’s economic future and mobile uses on smart phones and other devices is surging.

“We’re seeing that across the board everywhere,” he said.

Fortunately, costs are declining: A Wi-Fi repeater the size of a big cereal box only costs $600-700. And the new wavelength may help the state finally get everyone connected.

“I’m pretty excited about what this could do for Vermont,” he said.

Beyond nuts and bolts issues, the forums on Saturday focused on how to renew community ties. For the 24 towns that won grants under the e-Vermont project, it’s a chance to become laboratories and models for how broadband can build community connections. Part of the project also centers around the 24 town elementary schools, where students in some grades get netbooks and teachers receive intensive digital technology training under a program called “Digital Wish.”

Susan Clark of Middlesex said Front Porch Forum has become an important vehicle for enabling townspeople to keep in touch with each other and up to date on local government affairs. FPF is not anonymous so people behave like neighbors. Because municipal information is available on the forum, controversies seem to be headed off because no one thinks “the wool is being pulled over their eyes,” she said.

“There’s this feeling of connectedness in the town now,” said Clark.

Michael Wood-Lewis, founder of Front Porch Forum, explained how an email list he launched in his Burlington neighborhood a decade ago evolved into the forum that connects townspeople in 60 Vermont towns with 26,000 subscribers.

“That’s the secret to our momentum: It’s intensively local,” he said.

Belisle, of Woodstock, said that’s what innovative uses of broadband can do, bring people together and create a sense of community, whether it’s a local effort for the food shelf, helping a sick senior, or connecting neighbors who may not know each other.

Broadband can help people share “this wonderful lore and beauty that comes from living in the country.” Thanks for reporting an error with the story, "State leaders hope to build “digital culture”"