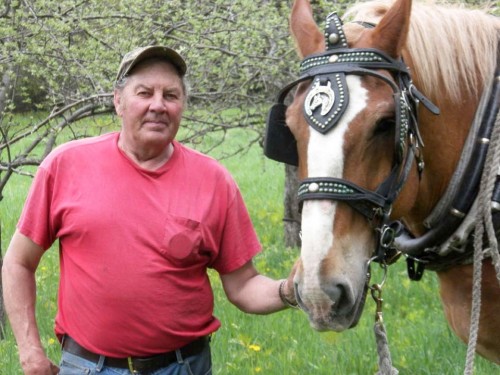 For over three decades Claude Desmarais has been laying line with draft horses. Fred has been on the job for five years now. VTD/Eric Blokland

Two miles above the village of Greensboro Bend on Stannard Mountain, a crew of linemen for FairPoint Communications takes a break. A garter snake slinks around the rear wheel of a work truck parked on sparsely-populated Norway Road. One of the linemen picks up the snake by its tail. It wriggles as he brings it close to Claude Desmarais, a 67-year-old lineman who stands over six feet tall.

Desmarais remarks that he has no plans — and no need — to retire from his work — which is negotiating tough terrain with his Belgian draft horse Fred. Snakes, however, give him the freaks.

“You don’t get close to me with that snake,” he says, a Kingdom lilt in his speech.

“What about Fred?” says the lineman, dangling the snake as he moves past Desmarais.

Fred, the draft horse standing next to Desmarais, is unperturbed by the snake or much else. The muscled 1,700-pound cable-hauling Belgian is in full draft regalia. Studded leather flaps keep his eyes on the task at hand. A leather collar wraps around his neck, bearing the hames, or a frame from which the traces span Fred’s torso and connect to an iron whippletree trailing behind.

The hames, now wrought from aluminum instead of the traditional wood, are about all the progress Desmarais has seen in draft horse technology since he started contracting with power and telecommunications companies over three decades ago.

“My part of it has always been the same,” says Desmarais.

It’s perhaps a fitting irony that Fred is the anachronistic vehicle for broadband installation in remote areas of the Northeast Kingdom. Without Fred pulling his weight in fiber-optic cable, however, FairPoint would be hard-pressed to meet its 2013 goal, set by Gov. Peter Shumlin, to bring Internet to every home in the state.

For the moment, Fred walks around untethered, content to munch the grass that linemen occasionally pluck for him. Idling, he begins to toe the ground near a utility pole. Mud whorls behind his hooves. The linemen look on, amused: after a few more hesitant steps, Fred plunges into a mud puddle and rolls around.

Hastings and his crew are headquartered at a FairPoint garage in St. Johnsbury. Although Hastings has worked from that location since 2000, like him, most of his crew hails from out of state.

“Did you tell him I worked for your dad, too?” Shouts Mike, a younger lineman pulled in from his regular post in Portland, Maine. He dangles from a harness atop a utility pole, unmistakable in a neon International Brotherhood of Electrical Workers T-shirt. He’s one of four Mainers on the crew. The only Vermonter is Phil, a quiet guy from the southern part of the state. They’re all pulling 70-hour weeks, and they live at a Comfort Inn.

Fred grazes his way among flowering Trillium and crab apple trees while Hastings’ crew unsnarls a lasher, their primary tool for laying line. It’s a metal cylinder the size of a block of firewood that binds newly-laid fiber-optic cable to an existing line strung between utility poles. After laying the fiber-optic cable along the ground, the crew works backward, sliding the lasher along the existing line 15 feet overhead to raise the new fiber-optic cable and secure it. When it jams or reaches a utility pole, the crew stops to run a ladder, or kick their way up the wooden poles using metal hooks bound to the insoles of their boots.

FairPoint is one of a handful of companies that is working to lay fiber-optic cable to homes even in the most remote areas of the state.

It’s the end-of-the-dirt road, last miles that have been a challenge for private broadband companies like VTel, Sovernet, FairPoint, Burlington Telecom and Comcast.

The problem is as old as rural electrification. Vermont’s difficult terrain and sparse population make it unprofitable to develop rural infrastructure — a situation that left the towns of Victory and Granby dark until 1963, when Central Vermont Public Service finally ran electricity to those towns.

Gov. Peter Shumlin has said Internet access is a necessity of the modern age, and he has pledged to bring broadband to every last mile by 2013. Gov. Jim Douglas also promoted the virtues of the Internet and attempted to provide service by 2010, but his ambitions were thwarted by the Great Recession and the unwillingness of private companies to invest money in an expensive infrastructure outlay that didn’t guarantee profitable returns. 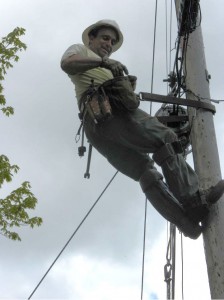 The Shumlin administration has access to capital that was unavailable just a few years ago.  Vermont’s congressional delegation helped to secure $410 million in federal money earmarked for broadband development.

Areas that have been neglected like the remote stretch of Norway Road between Greensboro Bend and Stannard with maybe a dozen homes on it, have become the locus of FairPoint’s state-supported efforts.

The difficulty of getting cable to “every last mile,” is where Fred, the cable-carrying draft horse, comes in.

“Hopefully it pays off,” says Hastings.

“We could maybe get a four-wheeler in here,” he continues, gesturing to the cleared swath of boggy, fern-studded terrain that he’s working in today. But definitely not a truck, and Fred’s impact is nearly invisible. Residents rarely complain about a draft horse tromping through their yards.

As a so-called “telephone horse,” Fred starts the morning by towing 48-fiber cable (so called because of the 48 individual strands of glass cables wound into an inch-thick band) from a massive spool on the rear of a FairPoint truck. Then he backtracks with the crew, drawing the overhead lasher along utility wires between poles. They pause frequently to jump poles and troubleshoot snags, and Desmarais, Fred’s owner and handler, unhooks the whippletree from the lasher’s line to let Fred wander.

Fred is 14, and he’s been laying line for five years. Desmarais, who lives in Westmore, has laid line with draft horses for 31 years, and he learned to drive a team on his father’s farm in Barton when he was young. He travels to Amish country in the Midwest at least once a year to appraise new equipment and buy a horse, if one catches his eye–as Fred did one year while Desmarais was in Indiana. Desmarais has four draft horses, another Belgian and two Percherons: a second team lays line for FairPoint elsewhere in the state.

Desmarais has never lacked for work, even as fleets of diesel utility trucks and versatile machinery became the standard for laying cable. And he’s noticed a small resurgence in draft horses in Vermont recently. “More draft horses are coming around. People are starting to use them a little bit,” he says.

Desmarais’ current client hopes to wrap up with Fred by this June. “We’re on schedule, or ahead of schedule,” says Hastings. He’s been working with Desmarais and Fred on broadband since April 2010, working 55 hours a week in the winter — “with the snow up to your belly button” — and around 70 hours during the longer summer light. On a good day, he says, they’ll string 8,000 feet of cable.

This cable connects, in turn, to electric cabinets scattered around the area. The cabinets power signals — Internet-bearing signals — along three and half miles or so of cable, explains Hastings. All the fiber-optics cables in the area ultimately snake into Greensboro, where a regional office generates the signal bringing YouTube and Hulu to the northwestern foothills of Stannard Mountain.

Having hauled the lasher a couple hundred yards, Fred’s again released to wander among the dandelions as Mike spikes his way up another pole. They’ll go on like this, the FairPoint crew leapfrogging Fred and Desmarais and vice versa, all the way down Norway Road — or until dark falls. After a night’s rest, they’ll be up here again tomorrow for a 7:30 a.m. start. “I’ve been on three weeks now,” says Mike. “I think I got a day off coming up.”

A while later, just south of Morrisville on a busy Route 12, flaggers slow traffic. A FairPoint truck, its arm extended with a worker in the bucket, runs a lasher stringing new fiber-optic cable along the highway. The truck inches along, laying line no faster than Fred’s plodding pace up on Norway Road.

Thanks for reporting an error with the story, "Draft horses bring fiber optics to remote locations"