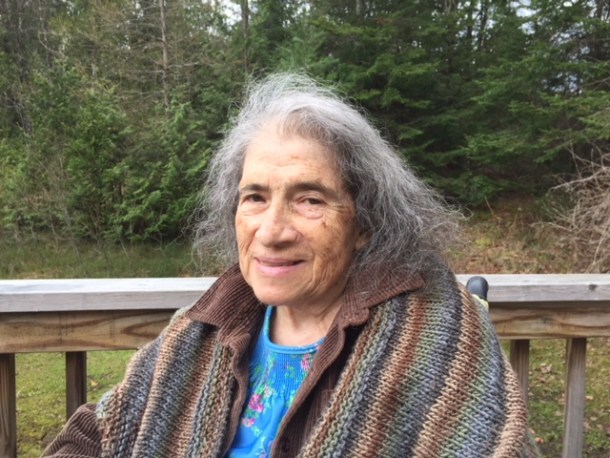 Vermont poet, playwright, artist and activist Phyllis Rachel Larrabee, née Phyllis Rochel Litman, died after an initial visit to Central Vermont Hospital in mid-March failed to locate the cause for a mysterious fainting spell. Two weeks after a second visit to the hospital it was decided that the only options remaining were a likely fatal surgery or hospice. Phyllis courageously chose hospice and died peacefully in her apartment at Heaton Woods in Montpelier on April 7th.

Born and raised in Newark, New Jersey in 1938, Phyllis survived whooping cough at age 5 after she spent 6 weeks at a sanitarium in the countryside. She was an engaged learner and insisted on reading and writing despite being warned by her Jewish mother that she wouldn’t be able to get married if boys thought she was too smart. At 14, horrified by the holocaust and the intolerance within her own society, she was already a radical feminist. She refused to wear make up and was learning about the exciting experiment of kibbutzim in Israel as a member of a Jewish Zionist organization. Despite her parents frowning upon the idea, she went to live on an Israeli kibbutz at age 16. She had a romantic affair and was engaged to marry now renowned Palestinian-Israeli journalist Atallah Mansour in 1956. However, when confronted with having to convert to Islam, Phyllis thought her mother would have a nervous breakdown, and instead had her own.

After recovering, she moved to Manhattan and began a series of secretarial efforts eventually leading to the National Committee for a Sane Nuclear Policy. There she became the office manager and hired a few women who would have major influences on her future. In 1959, with the Cuban revolution still fresh, she traveled to the island nation to see for herself what was happening there, and almost stayed after falling in love with the Cuban people and their enthusiasm for building a future on their own terms. She decided instead to return to the USA to tell people about the revolution she saw first hand. After the House Unamerican Activities Committee nearly shut down the organization she was working for and then being fired for attempting to organize a workplace union, she began to perform odd jobs doing secretarial work. She was a very fast typist and did shorthand as well. You can still see that influence in her hand writing to this day.

Carol Schmitzer was (non)married – that’s another story – to my stepdad George Larrabee by my father, Unitarian Minister Alan Frederick Sawyer, Jr. My father never filed their marriage certificate. George grew up in Westfield, Massachusetts and after serving in the 82nd Airborne during the Korean War he was a qualified parachutest. George was attempting to make a living as a commercial artist in New York City where he and Carol met. Phyllis hired Carol at what was later to become Sane/Freeze in the 1980s – the folks who organized the June 12, 1982 million person strong march against nuclear power and weapons in which the citizens of Vermont had the largest contingent, filling an entire New York City block. 177 Vermont towns voted for a nuclear freeze over the next two years!

After getting married to George, Carol thought Ms. Litman and Mr. Sawyer, would like each other. And they did. Phyllis and Alan would travel to Washington, D.C for the March on Washington for Jobs and Justice August 28, 1963, where Martin Luther King, Jr. would give his now famous I have a dream speech. The new couple was soon pregnant and married, living in Springfield, Massachusetts where Minster Sawyer had engaged in a civil disobedience campaigning against Woolworths for not integrating their lunch counters in the south.

After the Minister was voted out of his church in Munson, Mass. in 1963, he looked around and realized that all of his friends were either black, Jewish or communists and it was time for him give up the cloak of religion. Now married to a communist, he was ready to join the fray and the new family moved to Boston. There Alan worked for the Boston Shipyard, Dixie Cup and wherever he could obtain work as a machinist, simultaneously selling The Militant newspaper and rabble-rousing to get the union he was a member of, to act like it had power. Both Phyllis and Alan became active members of the Boston Chapter of the Socialist Workers Party and were actively engaged in electoral campaigns to get their colleagues into office by standing on street corners, talking to passersby and obtaining signatures to get them on the ballot.

Phyllis had begun to write poetry when she met Alan, yet it wasn’t till the early 1970s as she got involved with the feminist consciousness raising movement and joined the Bread and Roses Collective (the publishers of the 1970s classic, Our Bodies Ourselves), and Boston Women United, that she began to take poetry seriously. Phyllis co-wrote many periodicals about the ideas behind this second wave of feminism as it’s often called, from the late sixties until about 1974. In 1974, the Stone Soup Poetry Society run by Jack Powers published Phyllis’ first poetry collection, entitled Old Leaflets on Shopping List and Rashly Written Poems. It even received a short review in the New York Times. Stone Soup also published her second collection, her first of Vermont poems in 1975, Cream of Red Pepper. In 1980, Phyllis Sawyer at that time, receive an award from the Vermont Academy of Arts and Sciences for her work with the Intercollegiate Student Symposium for “outstanding work in the field of poetry.”

Fast forward to today and Phyllis has self published more than 30 books of poetry. She also wrote a play about her experience in a Somerville, Massachusetts working class neighborhood in the early 1970s called The Alley. And Love, Medicine and Mishugas, a play about life at an alternative lifestyle community in Vermont. She co-wrote three plays with her son Malcolm Sawyer: Startruck and Startruck II. These feminist comedies discussed social and ecological conflicts that we are grappling with still today with the humor and wit that Phyllis was known for. Also with Malcolm, she wrote Tagadozik/Strike – tagadozik means to strike in the Abenaki language. The Startruck plays were produced in the late 1989 and 1990 at the Christ Church in Montpelier, but Tagadozik never was produced although an effort was made to do so in the mid 1990s.

After George and Phyllis were married in 1989 they became very involved in the Abenaki rights struggle in Vermont and actively worked to stop the Hydro Quebec megadam projects in northern Quebec that would have flooded and thus destroyed hundreds of square miles of Innu and Cree traditional hunting and fishing grounds. When I would visit them in their home, first in Plainfield and then on Greenwood Lake in Woodbury, the inside of their house was covered with 3 x 5 index cards with Abenaki words taped to the appropriate part of the house. And meals always included giving thanks to the great spirit in Abenaki.

Phyllis also engaged with prose, writing many pieces for the Green Mountain Trader, Buffalo Mtn. Coop Bullsheet and others over the years. She helped organize Poets Arising in Burlington in the 1990s which included collaborations with artists and musicians such as Janet Fredericks and Michael Arnowitt.

I had been making plans to return to Vermont in May, after my second vaccine,¬¬¬ to work with Phyllis to put together the format for an anthology of her work, when I learned that she was in the hospital. When I learned that she has a terminal condition, I flew to Vermont to see her through her last days. Phyllis died last Wednesday, April 7, 2021 and was buried in Green Mount Cemetery. It has been a few weeks of unbelievable grief for myself and our family. Phyllis has innumerable fans in Vermont and many throughout the country. We hope to have a memorial for her next spring if we have actually beaten Covid 19 by then. We’ll see. For now, with tears in my eyes, I am announcing the formation of the Phyllis Rachel Larrabee Foundation to oversee the final collection of all of her works and make them available to the public. My mother’s joyful spirit and insistence on making life a poetry festival provided meaning and joy for many of her friends, family and acquaintances in Vermont and throughout North America. I think we need her spirit in this world more than ever.
Over the next year we will be collecting stories from people about Phyllis, random poems and collections she may have given to people, as was her nature and of course financial contributions to publish and produce her works.

You can join me in supporting this effort by contributing to our current GoFundMe campaign, “Let us remember Phyllis Rachel Larrabee” at https://www.gofundme.com/LetUsRememberPhyllisRachelLarrabee. Or via Venmo @FrederickESawyer or Paypal via [email protected]. You can also send inquires, condolences and donations to Frederick Emile Sawyer 810 West Manhattan Avenue, Santa Fe, NM 87501. The foundation’s address in Vermont will initially be c/o Blakely, 69 Joy Drive, unit G3, South Burlington 05403.

VTDigger press releases are provided by submitting organizations and may include mention of VTDigger staff, family and trustees.

Promoting a business, organization, or event?

Use our self-service Press Release Portal to promote it on VTDigger and reach our entire web and email readership.

Thanks for reporting an error with the story, "Poet, playwright, artist, activist Phyllis Rachel Larrabee dies at 82"