Ruth Reid Gjessing—nurse, businesswoman, conservationist, matriarch, advocate for homeless animals, and indefatigable champion of worthy causes—died at her home in Westmore, Vermont, on March 9, following a year of declining health. She was 96. At different times during her long and active life, she lived in Tennessee, New York, New Jersey, and Cali, Colombia; but she was a Vermonter through and through. In her independence and directness, she epitomized Yankee pluck. One of her favorite pastimes was shoveling snow.

Ruth was born on October 3, 1924 in Burlington, Vermont, to Joanna (Croft) Reid, an educator and leading Vermont suffragette, and Edward H. Reid, a local businessman, who was himself a strong supporter of women's rights and population control. She received her elementary and secondary education in Burlington's public schools, graduating from Burlington High School at the age of 16. At BHS, she excelled not only academically but also athletically, being an excellent swimmer and a mainstay of the girls basketball team. After a year at Vanderbilt University in Nashville, Tennessee, she transferred to Skidmore College in Saratoga, New York, and subsequently entered the college's nurses training program in New York City. While living in Manhattan, she experienced the dim-outs that were in effect due to WWII and fears of attacks by German U-boats. One of her most vivid memories was of going to a movie in Times Square in the late afternoon on V-E Day—May 8, 1945—and emerging from the theatre after nightfall to find that the district's colorful lights, advertisements, and billboards were all blazing again.

While completing her nursing training in New York, Ruth struck up a correspondence with Edward William Steele, Jr., a soldier in Europe with the 156th Field Artillery Battalion. They met when he returned to the United States after Germany's surrender and married on July 28, 1945 in Burlington at Starr Farm Beach on a bluff overlooking Lake Champlain. After his honorable discharge from the Army in November of that year, and her graduation with a B.S. and R.N. from Skidmore the following spring, they settled in Burlington. He finished his undergraduate studies at the University of Vermont on the G. I. Bill, and for some years taught political science at Middlebury College and UVM. They had three children—Timothy, Bradley, and Martha. They divorced in 1961.

In the late 1950s and early 1960s, Ruth worked as an RN at the Bishop DeGoesbriand Hospital (now the University Health Center) and the Mary Fletcher Hospital (now the Medical Center Hospital of Vermont), but after her divorce, she took a job as a nurse for the Burlington School Department, moving to this position because its hours, holidays, and vacation schedules coincided with those of her children, who were by then all attending the city's public schools. She also increasingly assumed responsibility for the business affairs of her father, who was in failing health.

As a school nurse, she devoted as much time and energy to providing counseling to troubled students as she did to diagnosing and caring for illnesses. With a number of these students she maintained relationships and supplied emotional support for decades after their graduations. She managed to do this, while collecting, on evenings and weekends, rents for properties owned by her father, and raising, as a single parent, three well-adjusted children, who throughout their lives have embraced the self-reliant, resilient spirit she consistently modeled.

On July 27, 1969, she married Erland Gjessing, a Professor of Biochemistry in the Medical School of the University of Vermont and a fellow member of the Unitarian Church in Burlington. Shortly afterwards, they moved in Cali, Colombia, where, under the auspices of the Rockefeller Foundation, he taught and conducted research in enzymology at the Medical School at the Universidad del Valle in Cali. He and Ruth learned Spanish and travelled widely and adventurously during what became a seven-year sojourn in South America. She put her business acumen and energy to good use when she volunteered to help organize a cooperative for indigent women in Cali's Bellevista barrio. Members of the co-operative learned to make macramé handbags, and after assuming leadership of the enterprise, she guided its expansion, in the process turning her home into the warehouse for the purses the women produced. She made a connection to a buyer for Pappagallo, a hip brand of clothing and accessories whose products were carried by high-end department stores. Soon, hundreds of the macramé bags were being sold to fashionable consumers in United States. Mary Jane Eberhard, a friend of hers in Cali, would later write: "Why do they give Nobel peace prizes to politicians? Why not to a stubborn, determined, ingenious, tough gringa with a warm heart, who, when suddenly transplanted amidst the seemingly hopeless poverty of her Latin American counterparts actually did something about it? With virtually no money and through sheer force of wit and will Ruth organized, trained, and acted as marketing advisor for a large number of women, enabling them to turn their spare moments and manual skill into cash. The Gjessing house overflowed with raw materials and finished goods, and these women coming and going as if it was their own (in a way, it was). Ruth overcame obstacles of organization, bureaucracy, and rivalries among the women themselves to make the thing work so well that it was self-perpetuating long after she left."

Upon returning to Vermont in 1976, Ruth and Erland occupied her home on South Willard Street in Burlington, but in 1980 they moved permanently up to a property he owned in Westmore in Orleans County on the west side of Lake Willoughby. The property consisted of a ramshackled farmhouse surrounded by 120 acres of forest. In honor of his Danish heritage, Erland called this place Elvehoj (Hill of the Elves). Over the years, Ruth and he renovated the house and its environs. At different times, they kept geese, chickens, and two pigs. They also adopted in a succession of stray dogs and rescued cats. Each summer, they planted a large garden, the bounty of which they shared with neighbors and friends.

Erland had longstanding family connections in Orleans County, and Ruth came to love the region as much as he did. She committed herself wholeheartedly to preserving and promoting its natural beauty and its history. Together, the two of them brought a refreshing energy to Westmore, as was observed by David Stevens, a neighbor and friend and longtime member of the town's Board of Selectmen. In 1988, Ruth joined Westmore's Planning Commission, on which she served for many years. In addition, she was a dedicated volunteer for, and a driving force in the success of, the cat spay-and-neuter clinic at Frontier Animal Society (now the Pope Memorial Frontier Animal Shelter). She served, too, as a volunteer guide for The Old Stone House Museum in Brownington, and delighted in sugaring for many years with Wyman and Grace Smith in Cabot and later with the Randall family in Barton. And for 20-some years, she coordinated the Fedco seed and potato orders for the local No-Name Co-op group. She personally collected all the orders from Co-op members around the Northeast Kingdom (the Northeast corner of Vermont), placed a cumulative order with Fedco, and when the potatoes were ready, drove to the Fedco center in Clinton, Maine, to pick them up. (Though Fedco mailed the seeds directly to her, shipping the potatoes was prohibitively expensive.) Upon returning home, she organized the seeds and potatoes according to the original individual orders, and then drove around the Kingdom, dropping them off to Co-op members.

In the 1990s and early years of this century, Ruth served as a Justice of the Peace for Westmore. In that capacity, she testified in the State Legislature in favor of the landmark Civil Union legislation of 2000. In doing this, she echoed the activism of her mother, who in 1919, during the national debate over the 19th Amendment, had testified before the Legislature in favor of granting the franchise to women. As Justice of the Peace, Ruth officiated at some of the first Civil Union ceremonies in Vermont. Because the Civil Union legislation was highly controversial, she at times received harsh and even threatening criticism. But she was egalitarian in principle and progressive in spirit—when she was a young woman her political heroes were Eleanor Roosevelt and Adlai Stevenson—and she believed that it was important to stand up for the legal rights and protections of all members of the human community.

Perhaps the happiest paradox of Ruth's life involved her four decades of residence in Westmore. The Northeast Kingdom is the most rural and sparsely populated area of the state, and their nearest neighbors—their friends Lynda and Ben Kinsley and the Stevens family—lived roughly half a mile away to their south and north. Yet despite this geographical isolation, Ruth and Erland entertained a steady stream of visiting relatives, friends, and colleagues from all over the state, the country, and the world. Ruth became a legend as a hostess, cooking hearty meals for everybody and often leading them on hikes up Wheeler, Bald, Hor, and Pisgah mountains and taking them afterwards for a cooling swim in Lake Willoughby. Her social genius, somewhat checked during her child-raising and working years, emerged fully. In her early days at Elvehoj, the house did not have a plentiful or reliable water supply, much less amenities like central heating; but even the most confirmed city-slickers among her friends were happy to journey to and lodge at Elvehoj to enjoy her hospitality.

Since Ruth could relate equally to people of all ages, her circle of acquaintance was not only broad but also transgenerational. She never stopped making new friends or maintaining the friendships she had made in the past. If her death comes as a shock to those who knew her well and loved her, it is not because she seemed to possess the elixir of eternal life. She faced many significant challenges, from raising and supporting three children as a single parent, to moving in middle age to a South American country where she knew no one and did not speak the language, to "restarting" life in retirement in accommodations an Eagle Scout might find intimidating. She also suffered her share of health problems. As a former basketball player, she lamented that the older she got the shorter she became. But she absorbed the changes and disjunctions in her life, and stoically endured emotional and physical setbacks, always seemingly attuned to how she could bring joy and comfort to the wide orbit of friends and family members she stayed connected to, and cared deeply about.

In lieu of flowers, donations may be made to Ruth's memory to the Foundation Fighting Blindness (https://donate.fightingblindness.org/) or The Vermont Land Trust (https://join.vlt.org/). A celebration of her life will be announced at a future date. Online condolences may be made at curtis-britch.com. Arrangements are entrusted to the care of Curtis-Britch & Bouffard Funeral Home, locally family owned and operated. 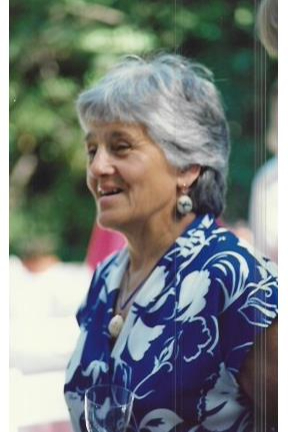