SAINT ALBANS – James Edward Lavoie, 81, of Saint Albans, Vermont passed away peacefully on Thursday, April 29th with his family by his side. Jim was born on April 20th, 1940, in Burlington, the son of Leo J. and Violet F. (Thomson) Lavoie. Jimmy attended schools in Burlington, graduating from Cathedral Grammar School in June of 1954, and Burlington High School in June of 1958.  From the time Jimmy turned six years old, he worked at his father’s Burlington Esso gas station, as well every day after high school at Belville’s station.

In May, 1957, during his junior year of high school, Jim enlisted in the United States Naval Reserve.  During the summer of 1957, he attended boot camp at the United States Training Center (USNTC) in Bainbridge, Maryland.  Jim served his country proudly in the U.S. Navy from 1957 until retiring with rank of Senior Chief Petty Officer in 1985. Jim spent time in Vietnam and continued to serve his fellow veterans until the last weeks of his life, with an active role as treasurer in the Vietnam Veterans of America in St Albans.

During the later years in his life, Jim enjoyed spending time with his grandchildren Eliana, Sylus and Isaac, and was very proud of Gage entering into the Air Force. Jim also gave fellowship and support to area veterans, both young and old.  Jim enjoyed hunting, gardening, the great outdoors and spending time on his land to enjoy nature and all it has to offer.  Jim battled through several illnesses the last 3 years of his life and the family wishes to extend their sincere thanks to Dr. Krista Evans and Dr. Maura Barry of the UVM Medical Center as well as Jim’s “personal nurse”, Jolene O’Connell, who gave Jim much joy, inspiration and the hope he needed to live a full life to the very end.

Jim is survived by his four children, James J. Lavoie of New Britain, CT, Michael Lavoie and his significant other, Jolene O’Connell of Saint Albans, Ann Lavoie Woods and husband Sammy of New Britain, CT and Patrick Lavoie and wife Melien of West Suffield, CT., his first wife and mother to his children, Margaret Danyow (Pariseau) of Essex Junction, two sisters,Patricia Dominski and Elizabeth Crosby, both of Florida, as well as step-daughter, Brenda Rice and her children, Sarah and Alex as well as countless nieces and nephews.  Besides his parents, Jim was predeceased by his sisters Barbara Hill, Carol Adams Stark, brother Robert Lavoie, as well as his second wife, Cora (Rice). 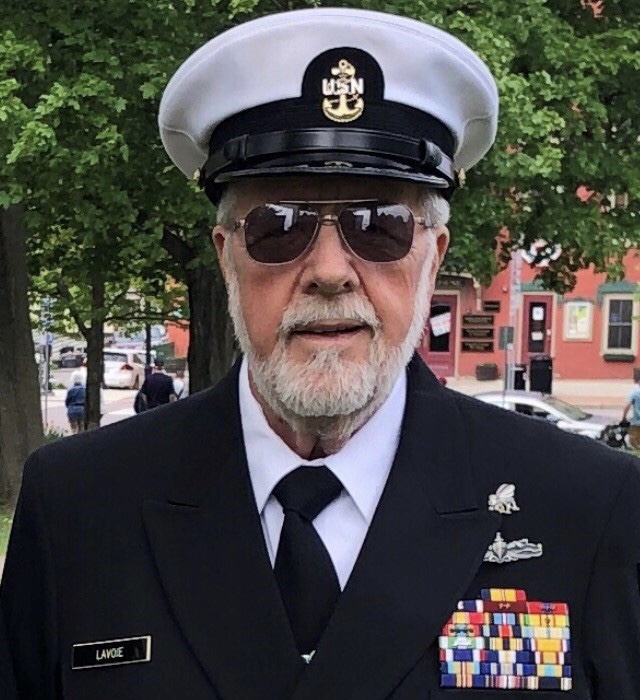 Services were held in early May, with many friends and family in attendance, after which Jim was buried with full military honors in the Mount Calvary Cemetery in Burlington. Contributions in his name can be made to the Vietnam Veterans of America, St. Albans, VT chapter.