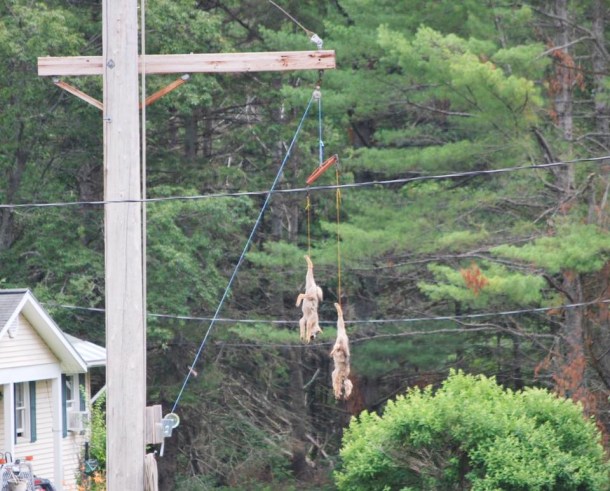 Two coyote carcasses hang in the yard of a house in Bloomfield. Animal activists were upset, though officials say it appears nothing illegal has been done. Courtesy photo

[S]tate officials say there is little they can do after two dead coyotes were strung up from a pole at a home on a main road in Bloomfield over the weekend, and a Vermont animal rights advocacy group is outraged.

Brenna Galdenzi, president of Protect our Wildlife, said she was deeply saddened and upset when she first saw photos of the display in Essex County.

“I can’t imagine what kind of mindset someone would have to do something like that, knowing that children are going to see it,” she said.

Photos on social media show the two dead coyotes attached by a hind leg to a cord and pulley system, which is attached to the pole. The carcasses are surrounded by flies and insects and the face of one coyote appears to be disfigured. The display is outside of a home on Route 105.

It’s legal to hunt coyotes year-round in Vermont, and officials say it appears the homeowner did not break any laws.

Proposed regulations on coyote hunting in Vermont have been met with resistance. In June, the state’s Fish and Wildlife Board voted against a petition from a group of Vermont Law School students to end the open season on coyotes. The Vermont Traditions Coalition had presented an opposing petition aiming to stop the regulation from advancing.

The state enacted a ban on controversial coyote killing contests last year, which became law without Gov. Phil Scott’s signature after it passed the Legislature.

Galdenzi said her group became aware of the situation after a Vermonter driving by noticed the display and reached out.

“Our big thing is that when something terrible like this happens, we can’t change what happened, those coyote puppies are dead,” she said. “All we can do is raise awareness, and try to change laws to prevent this from happening again.”

Col. Jason Batchelder, head of wildlife law enforcement for the Vermont Fish and Wildlife Department, said he contacted the homeowner who strung up the carcasses on Monday. The individual informed him that the coyotes were no longer hanging.

In response to a voicemail request for comment, the owner of the home, Josh Riley, declined to comment or explain why he strung the two coyote carcasses from a pole on a main road.

Batchelder said the department has received calls on occasion for decades about dead animals hanging in trees, adding that the display is something the department “discourages as a practice” and can be perceived as a “disrespectful way to treat wildlife.”

“The line I’m walking is that if the law was broken we would have pursued it and it was not,” he said.

Galdenzi said Protect Our Wildlife is frustrated with a lack of support from the Vermont Fish and Wildlife Department in advancing restrictions on coyote hunting.

“They’ve just dug in their heels and been completely unwilling to do anything to address this kind of behavior,” she said.

Protect our Wildlife is working with the Vermont Coyote Coexistence Coalition to push for lawmakers to pass legislation to ban "wanton waste" and change Fish and Wildlife governance.

Wanton waste is when a wild animal is killed with no intention of eating the meat or using the fur. A bill introduced in February, H.357, would have banned that practice, with an exception for defense of property. But it didn’t advance out of the House Committee on Natural Resources, Fish, and Wildlife.

The Vermont Department of Fish and Wildlife opposed the original version of the bill, arguing wanton waste is better addressed in rules for individual species by its board. But the department worked with a committee-appointed group to create mutually agreeable language.

Opponents of bans on wanton waste, including coyote hunting bans, argue that coyote hunting is not “frivolous,” but plays a valuable role in population control.

A separate bill, H.190, would have created a working group on fish and wildlife management but also didn’t advance out of committee.

Animal advocates are now calling on Vermonters to contact lawmakers and urge them to back a wanton waste ban in the next session.

Galdenzi said it’s challenging to change the view that any regulations will lead to more regulations on hunting in general.

“It shows how bad things are in (Vermont) for wildlife when someone can do something so despicable and there are no laws to prevent it,” she said.

Most of the state legislators representing Bloomfield did not return calls on Tuesday seeking comment on the incident.

Rep. Connie Quimby, R-Concord, said she hadn’t heard anything about the incident, and declined to comment after hearing an explanation of the situation.

The governor’s spokesperson did not respond Tuesday afternoon to a request for comments about the governor’s reaction to the coyote display.

In an emailed response to constituent concerns, shared with VTDigger, Scott wrote that while the activity is “technically legal” his administration will continue to urge individuals to be respectful. He also mentioned passing a ban on coyote killing contests last year.

“This is understandably disturbing for many Vermonters,” he wrote. “As Colonel Jason Batchelder has indicated, this is not something that anyone should do, as it shows disrespect for wildlife, neighbors, and tourists.”

This story his been updated to more precisely describe the Department of Fish and Wildlife's position on the so-called wanton waste bill.

Thanks for reporting an error with the story, "Dead coyote display sparks controversy, calls for ban"