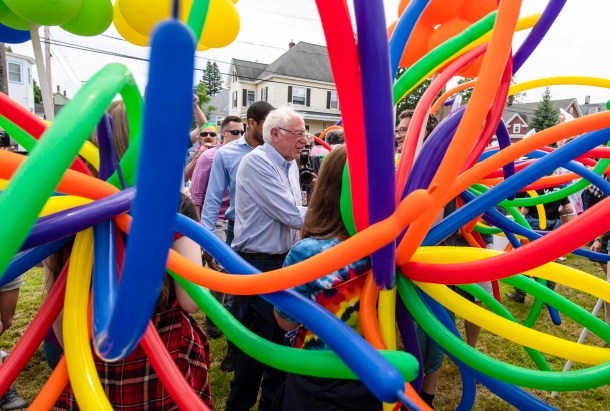 Sen. Bernie Sanders, lagging behind other top tier candidates in fundraising efforts, went on a shopping spree during the second quarter, spending millions more than the next closest Democrat.

In an email to supporters Tuesday afternoon, Faiz Shakir, Sanders’ campaign manager, said though he was “proud” of the number of contributions Sanders received, they were clearly outraised by their competitors.

“The truth is, we were out-raised this time. Not by much. But enough that we are going to need a lot more donations,” Shakir wrote.

Sanders did, however, outspend all the competition, dropping $13.9 million on early primary state infrastructure, political consulting and outreach.

Biden spent the second most of any candidate with $10.6 million during the second quarter, according to campaign finance reports.

Sanders’ spending included $131,654 on “office supplies” from Amazon — the online retail giant that he has railed against for its working conditions — $262,000 for access to voter information in early primary states and hundreds of thousands of dollars for online advertising and research.

In May, the campaign paid the Nevada State Democratic Party $100,000 for access to voter information.

The Sanders campaign paid Aisle 518 Strategies, a political consulting firm for progressive candidates, a total of $1.6 million during the second quarter for consulting on digital strategy and for advertising, according to the campaign finance reports. The firm was started by Tim Tagaris — Sanders’ 2016 director of digital fundraising.

The Sanders camp also paid Chris Burns, the special collections librarian at the University of Vermont, for “archival consulting” and “research.”

Burns was paid in four installments, three of which were for $800 each and the fourth for $1,600. The University of Vermont library holds Sanders’ mayoral papers in which he wrote extensively about his political ideology.

Jeff Weaver, who was the campaign manager in 2016 and is currently acting as a senior adviser to Sanders, is taking home the largest paycheck, even more than Shakir, of any member of Sanders’ campaign staff.

Earlier this year, as reports swirled about how campaign leadership in 2016 mishandled complaints of sexual misconduct, it was announced that Weaver would not be returning in the same role in future campaigns.

As campaign manager for Sanders in 2016, Weaver received a number of raises throughout the election cycle. In the early days of the campaign, Weaver was making $9,860 per month, but by October 2016, he was making $10,808.

Now, Weaver is receiving $15,833 a month as an “independent consultant” while Shakir, on staff, is taking home about $12,960 after taxes. Nina Turner, also a senior adviser to Sanders, is netting $13,378 per month after taxes.

Sanders also spent a significant amount of money on HaystaqDNA, a firm founded by the directors of data targeting and data analytics for former President Barack Obama’s 2008 White House bid.

From mid May through late June, the Sanders campaign spent $421,000 on the firm’s research and digital advertising services.

Over the last decade, HaystaqDNA has become known in the political campaign world for predicting at a high level of accuracy how Americans will vote based on mixing and matching a wide variety of characteristics.

The campaign reported that 99% of its fundraising came from pledges at or less than $100, with an average donation of $19 from nearly 1 million individual supporters.

Correction: The amount paid Aisle 518 Strategies has been corrected.

Thanks for reporting an error with the story, "Sanders falls short on fundraising but spends big in second quarter"