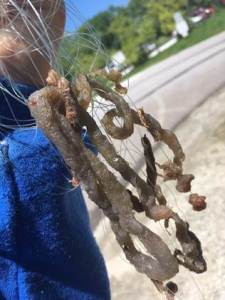 Thousands of fishhook and spiny waterfleas encrust a fishing line in June 2019, giving the appearance of a long worm. Photo courtesy of Lake Champlain Basin Program

[A]n invasive species new to Lake Champlain last year has gone from a few hundred cases to a few thousand.

Fishhook waterfleas — tiny crustaceans that are aggressive predators of plankton typically eaten by native species in the lake — were found on “nearly all fishing boats” returning to Shelburne Bay and Converse Bay over the holiday weekend, according to a press release from the Lake Champlain Basin Program.

The tiny organisms found on the downriggers of the boats were removed, treated, and disposed of by the Basin Program.

A related species, spiny waterfleas, was confirmed in Lake Champlain in the summer of 2014. Though neither species is known to have adverse effects on human health, they can clog and ruin fishing gear, and can disrupt the lake’s food chain.

Fishhook waterfleas are the 51st known invasive species in Lake Champlain. The organism is native to Eurasia, first arriving to the Americas in ballast water on the Great Lakes in the 1980s, and quickly spreading to other bodies of water throughout the continent.

The Lake Champlain Basin Program press release notes that they likely arrived to Lake Champlain by “hitchhiking” on recreational boats, trailers, fishing lines, and other equipment. The Finger Lakes in New York and Lake Ontario are the closest lakes known to host the species.

The impact from the waterfleas on Lake Champlain’s food web is unknown, officials report, though researchers have observed shifts in the zooplankton community after the detection of the spiny waterflea in Lake Champlain and other similar lakes. Waterflea eggs are also resistant to drying, which makes it harder to prevent the species’ spread. The waterfleas themselves will die once out of the water, but their eggs can hatch and multiply quickly in new lakes and rivers.

Also making management difficult is the fact that fishhook waterflea have life stages invisible to the naked eye. Officials are asking boaters to clean, drain, and dry their boats and trailers, and to drain bilge water and check their anchor lines, as well as to change fishing lines and tackle when moving between bodies of water. They recommend hot water, high pressure decontamination

“These invasive waterfleas pose a risk not only to the ecology of our lakes and ponds, but also to anglers’ enjoyment of fishing,” Louis Porter, commissioner of the Vermont Fish and Wildlife Department said in a statement. “Boaters and anglers are often the first to notice when new invasives reach Vermont – thanks for taking the time to prevent the movement of invasive species.”

So far, there is no known way to eliminate fishhook waterflea once they’re established in a body of water, according to the Lake Champlain Basin Program. 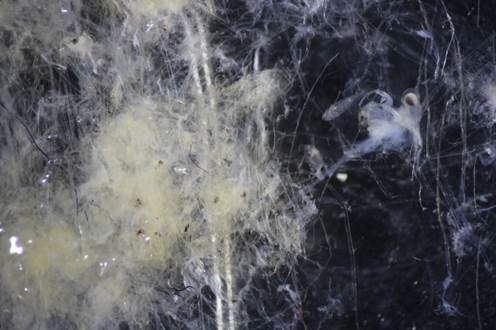 Thanks for reporting an error with the story, "Fishhook waterflea reaches infestation levels in Lake Champlain"