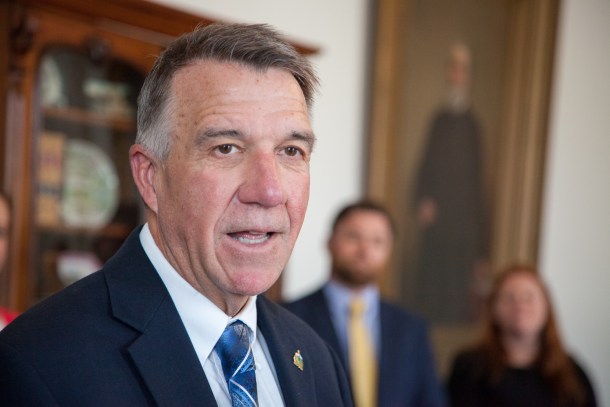 Phil Scott at his weekly press conference on May 9. Photo by Mike Dougherty/VTDigger

[G]ov. Phil Scott is asking state agencies with a plan to restructure state government to help close the gap between the projected growth in spending and available revenues.

That gap is expected to widen dramatically over the next five years, according to an administration analysis.

The Scott administration has instructed state agencies to take part in a budget “exercise” to identify ways to reduce the projected spending gap by 20%, according to an internal guidance sent out by Scott’s chief of staff, Jason Gibbs, earlier this month.

If the state doesn’t reduce some long-term expenses, the administration projects that in fiscal year 2025, Vermont’s spending across all agencies will outpace revenue by $255 million.

To reach the goal of reducing the gap by 20% by 2025, agencies would have to cut expected spending by tens of millions of dollars, at a time when the cost of operating state government only continues to rise.

Administration officials stress, however, that the exercise is not aimed at encouraging agency and department officials to make cuts to programs and services.

Gibbs suggested the governor would like to see proposals that restructure government to reduce costs.

“There’s two ways to do this,” Gibbs said Friday. “One is to just cut stuff, which is not the objective here. The other is to rethink the way you are doing things.”

Gibbs said that a combination of factors including the costs of labor and health care are driving up the price of operating government in Vermont. 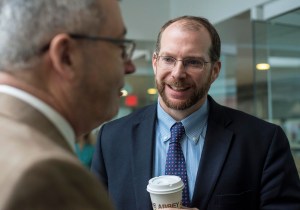 Gov. Scott’s chief of staff Jason Gibbs at the Statehouse on Feb. 20. Photo by Glenn Russell/VTDigger

Fiscal analysts also worry that after seeing a prolonged period of economic growth, the state and the rest of the country could soon see a downturn, which would likely mean less revenue.

“These are the good times and we can’t afford what we currently have on a year to year basis,” Gibbs said.

Sen. Jane Kitchel, D-Caledonia, chair of the Senate Appropriations Committee, said she was glad to see the administration is looking ahead to the budgeting challenges the state will face in the coming years.

But she said only looking at the issue only in the context of state spending is “a little limiting.”

She said the exercise should take place across “all state government,” and also focus on Vermont’s tax structure and revenue expenditures, the federal context for spending, and the specific pressures the state budget faces.

“I think that if we’re asking agencies to do this kind of work it really needs to be in a very broad context because you can’t simply say everybody suck up 20%,” Kitchel said. “It basically is saying all functions of government are of equal importance, or equal unimportance.”

Kitchel added that given that one-third of state spending goes towards public education expenses, and another third covers health care costs for Vermonters, it will be difficult to make reductions in spending without impacting existing services.

“This is why people need to understand once you start pulling that budget apart, the narrowness of reductions if you don’t want to affect benefits and services,” she said.

This year, the budget bill directed the Agency of Human Services, which spends the most of any state agency, to develop a strategic plan to identify trends where services are most needed by Vermonters. The plan is aimed at helping lawmakers redirect, and reprioritize the agency’s budget.

In anticipation of tough budget years ahead, lawmakers have also prioritized putting money into reserve funds, and paying off growing pension obligations.

Toll added that she was encouraged to see the governor was thinking about the budget in a long-term context.

Thanks for reporting an error with the story, "Scott asks agencies for plan to cut growing spending gap by 20%"