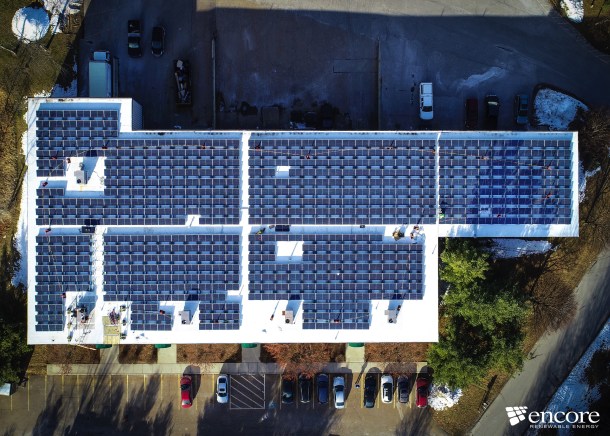 A rooftop solar array on the University of Vermont Medical Center building in Williston. Courtesy photo

The state’s largest utility and a renewable energy trade group have reached an agreement over a proposed fee on new solar projects in certain parts of the state. But a solar company argues that those costs should instead be paid by all ratepayers.

The proposed $37 per kilowatt fee, which would go into effect this July, still has to be approved by the state’s utility regulator.

Vermont has one of the highest amounts of distributed solar generation compared to electricity consumed, or load, in the country. Green Mountain Power, the state’s largest electrical utility, has seen a 1,400% increase in net-metered solar among customers from 2010 to 2018.

But that increase in distributed electricity generation has come with growing pains. One challenge is something referred to in the utility world as “transmission ground fault overvoltage,” or TGFOV.

As more solar comes online, the amount of generation compared to load has essentially reached a tipping point in certain parts of the state.

If more solar panels were to be added in those areas without upgrades, something like a tree falling on a line could lead to “a much bigger issue,” such as serious damage to transformers, substations and other components of the transmission system, explained Josh Castonguay, GMP’s chief innovation officer.

Castonguay said the utility has been addressing the overvoltage issue over the past five or six years with transmission system upgrades.

“But what’s happened more recently is, at some point, a certain project … is kind of the straw that breaks the camel’s back,” he said.

Under current regulations, the full cost of those upgrades falls to the unlucky homeowner or developer whose proposed solar panels would put that part of the grid over the limit. The average upgrade costs $75,000 — a cost GMP, developers and the state agree is prohibitively expensive for single projects to bear.

It's created a backlog of projects that can’t interconnect to the grid until one of them pays for the upgrade, according to a filing Castonguay made with the state Public Utility Commission.

GMP has determined that 70 of the utility’s 150 substations will eventually need upgrades to add more solar, said Castonguay.

In February, GMP made a filing with the PUC to charge $75/kW for projects planned in areas of the grid that need transmission upgrades. The fees would be pooled together to fund upgrades.

Renewable Energy Vermont, an industry trade group, filed requests for more specific information about the utility’s plan to address TGFOV. Executive Director Olivia Campbell Andersen said in an interview Thursday that REV initially had concerns about the “high fee” and lack of a clear timeline for completing the upgrades. 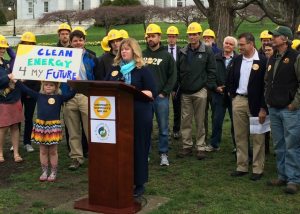 “Too many Vermonters aren’t able to generate their own electricity due to antiquated grid infrastructure,” she said.

GMP and Renewable Energy Vermont reached an agreement earlier this month in the form of a $37 fee on new projects in areas that currently need upgrades or will need them in the future if more solar comes online. The utility would also have to provide a plan for prioritizing the upgrades and revisit the fee in two years.

Castonguay said that the utility was happy to have reached an agreement with REV. “We don’t want…rooftop solar to be held up because of issues like this,” he said.

The Department of Public Service, which had originally requested the PUC open a formal investigation into the proposal in March, agrees with the concept of spreading out the costs for upgrades among projects, said Ed McNamara, director of regulated utility planning.

“The main thing is this idea of a dollar per kilowatt fee for interconnections costs is brand new and hasn’t been done before,” he said.

McNamara added that the per kilowatt fee was essentially based on estimates of upgrade costs and how much generation would actually be installed. But the department feels the plan to revisit the fee down the line addresses those concerns, he said.

All Earth Renewables, a Willston-based solar company commented on the proposal, arguing that the costs associated with TGFOV upgrades “should be borne by ratepayers — the collective beneficiaries of Vermont’s renewable energy laws and policies” rather than by fees on solar projects.

“This approach reflects the manner in which the distribution grid of today and tomorrow must be available if a more electrified renewable-powered society is going to make a difference in addressing climate change,” wrote All Earth’s general counsel.

Campbell Andersen also said the TGFOV issue speaks to a broader need for grid modernization in an era of increased distributed electricity generation.

“The larger issue related to this is Vermonters are trying to rapidly accelerate to 100% renewable energy and we’re working with great-grandma’s grid,” she said.

GMP made a filing the same day saying it “respectfully disagrees” that interconnection costs should be paid by customers.

“While true that TGFOV constraints have become common and are not unique, that is not to say that responsibility for remedying these constraints should rest with the ratepayer,” wrote Castonguay in a May 22 filing.

The Department of Public Service agrees with GMP that the upgrades are costs to connect to the grid, which are supposed to be paid by developers under state regulations, said McNamara.

Thanks for reporting an error with the story, "Proposed solar fee raises questions about who pays for grid upgrades"