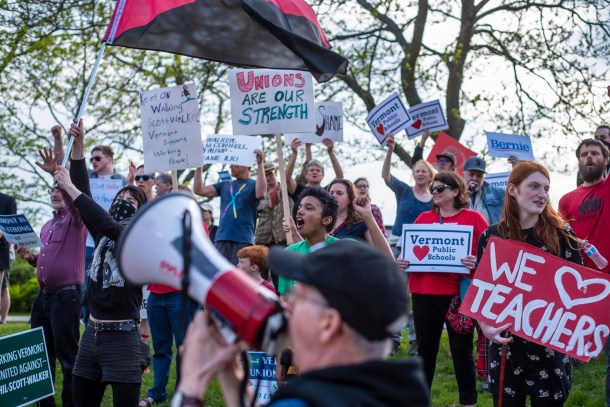 Protesters gather outside the Burlington Hilton as former Wisconsin governor Scott Walker appears at a Vermont GOP fundraising dinner in Burlington on May 30. Photo by Glenn Russell/VTDigger

[B]URLINGTON — Between 350 and 400 protesters greeted former Wisconsin governor Scott Walker, who was in town for a Vermont GOP fundraiser Thursday evening at the Hilton.

Around 150 Republicans attended the event inside the hotel, which featured dinner and speeches from Walker and Gov. Phil Scott.

The protesters gathered across the street from the hotel, where Walker was the main attraction.
Walker was the governor of Wisconsin from 2011 to 2019, having lost his re-election campaign in 2018. He is most well-known for signing a bill limiting the collective-bargaining rights of public-sector employees in 2011 and briefly ran for president in 2016.

Before leaving office, he also signed a bill limiting the powers of his successor, Democrat Tony Evers, which was later struck down in the courts.

Those who lined the street in protest Thursday decried Walker’s record in office, but were equally angry that Vermont’s governor was appearing alongside him.

Dwight Brown, chair of AFSCME Local 1343 Burlington schools chapter, said people from 50 organizations — unions and other community groups — were at the event, sending Scott and Walker a message that union-busting would not be tolerated.

“In this brave little state, we want to send a message,” Brown said. “We want to send our governor, who decided to side with someone who would be against labor, that we see it, we smell it, and we’re not having it in the Queen City.”

During his speech, Walker discussed his record as governor of Wisconsin and told Vermont’s GOP that 2020 could be a good year for the party. Walker said that before he had been elected governor, Wisconsin had been primarily controlled by Democrats.

“It’s not impossible, you did it with Jim Douglas, you did it with Phil Scott,” he said. “You can do it… but before you can win elections, you need to focus on changing minds, but more importantly, hearts.”

Despite Scott’s comfortable re-election as governor, Vermont Republicans lost 12 seats in the House in 2018.

Walker said Republicans should focus on the strength of the economy in the 2020 election, and highlight the Trump administration's tax cuts. 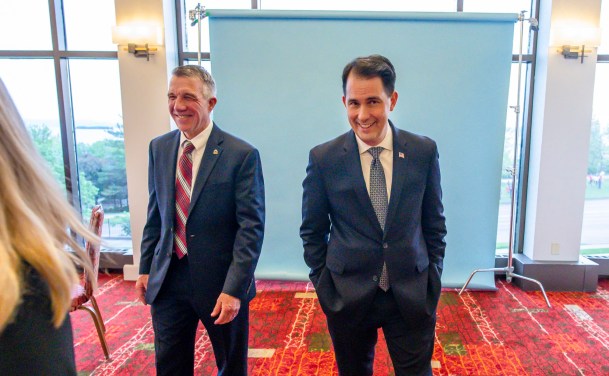 “We have the lowest unemployment rate in America since December of 1969,” Walker said. “I would contend, us as Republicans, don’t do enough to talk about it.”

To showcase the differences between Democrats and Republicans, Walkers used an analogy comparing Republicans to Uber and Democrats to heavily-regulated taxis.

“Republicans, we’re like Uber or Lyft… as long as the driver and passenger are safe, they don’t care whether you drive once a day or one hundred times a day,” he said. “That’s what we’re like, as long as you don’t hurt the health and safety of your neighbor, we don’t care. Go do your own thing.”

Walker predicted that Sanders would be the Democratic nominee in 2020.

“I think when the other candidates start to fall away, those folks are kind of Bernie-lite, and eventually those voters overwhelmingly are going to go toward Bernie Sanders,” he said. “Republicans, we tend to vote for the candidate we think could win…Democrats like to fall in love with their nominee.”

After saying he thought Bernie would be the nominee, Walker said Americans need to fight against socialism so the country does not become like Venezuela. Walker also praised Scott during his speech, and said they agreed 80 percent of the time.

“The one thing that, overwhelming, unites us as Republicans is fiscal discipline, and Phil has been a stalwart,” Walker said. “He’s been at the tip of the spear, in terms of that first budget... getting that budget through that has no tax or fee increase, that is remarkable.” 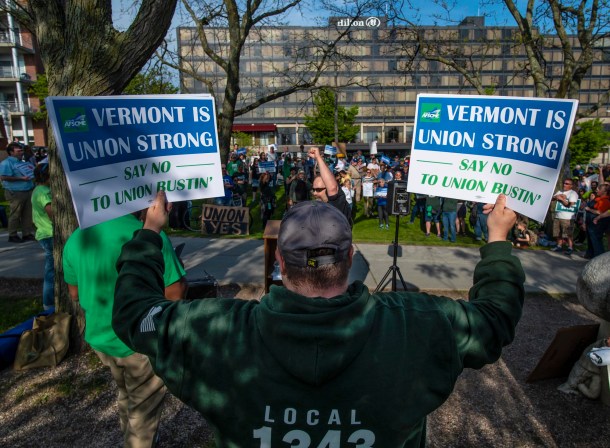 Damion Gilbert, president of AFSCME local 1343, holds up signs while protesters gather outside the Burlington Hilton on May 30. Photo by Glenn Russell/VTDigger

Facing criticism in recent weeks, Scott has said he feels obliged to attend the event. At his weekly press conference Thursday afternoon, the governor said he would have preferred another speaker.

“I think there’s number of Republicans throughout our country who would be ideal for us to hear from, but I didn’t have any opportunity to weigh in on that,” Scott said. “And I think he’s got an interesting story to tell.”

Scott added that Vermonters know where he disagrees with Walker, adding that everyone should be willing to listen to one another.

“Vermonters know me I’m a centrist, I’m open minded and always willing to listen to other points of view,” he said. “And I think that should be the message here, that we see ourselves as being so tolerant, so compassionate, we should practice that and we should listen to others.”

Speaking before Walker, Scott said that Republicans in the Legislature “stood up for the taxpayers of Vermont” during the just-finished session despite their small numbers. He said Vermont Republicans needed to keep a wide tent to regain some of the political power the party has lost.

“We’re fortunate here in Vermont to have a wide Republican Party tent, with different views and perspectives,” he said. “It’s a good thing we do, because in the bluest state in the nation, the land of Bernie, we’d have a harder time winning statewide and in many of the blue and purple districts if we had a limitus test to determine who’s going to run.”

Between 350 and 400 people were at the protest at its peak, according to an estimate from the Burlington Police Deputy Chief Jon Murad.

The rally started at 5:30 p.m. across Battery Street from the hotel entrance. Chants included “Hey hey, ho ho, Scott Walker has got to go,” and “Get up, get down, Burlington’s a union town.” Many in attendance held “No union busting in VT” signs.

The rally included a series of speeches from union leaders. 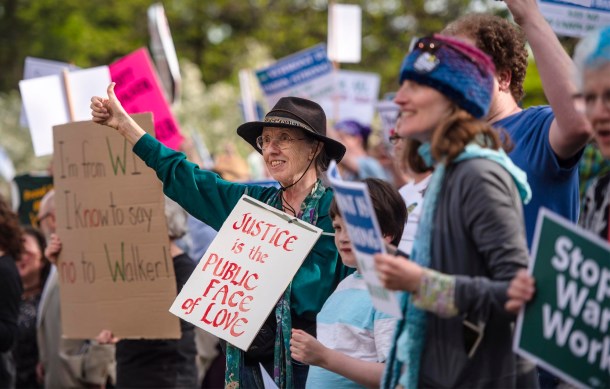 Sylvia Knight of Burlington joins in while protesters gather outside the Burlington Hilton on May 30. Photo by Glenn Russell/VTDigger

John Davy, the Chittenden County chapter president for the Vermont State Employees Association, said he was “shocked but not surprised” to see Scott aligning himself with Walker.

“Most of us don’t have a grand lying around to get a photo-op with some loser who broke Wisconsin, but we’ve got each other, and starting today we’re going to stick together and fight for an inclusive, united union-strong Vermont,” he said.

Deb Snell, the president of the American Federation of Teachers-Vermont, said those attending the rally had to “stay fearless” and keep fighting for the values they believe in.

“As our governor and his party break bread, very expensive bread, with a man who has clearly taken a stand on being anti-everything that union members stand for, we stand here … taking a stand,” she said.

A number of local politicians were in attendance, including Burlington Mayor Miro Weinberger, a Democrat, and Lt. Gov. David Zuckerman, a Progressive-Democrat.

Zuckerman said that he joined the protest in solidarity with the workers and other communities, that had been “attacked” by Walker as governor.

“He has expressed very homophobic remarks, he’s been part of the attack on women all across the country in respect to autonomy over their own bodies and reproductive freedoms,” Zuckerman said. 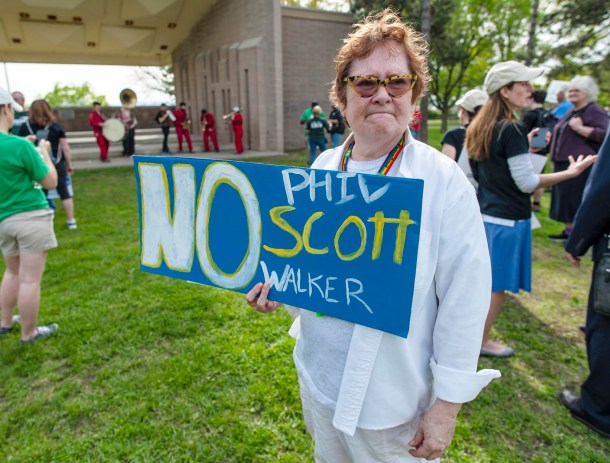 Gail Compton of Burlington prepares to join protesters marching from Battery Park to the Hilton Burlington on May 30. Photo by Glenn Russell/VTDigger

Sen. Bernie Sanders, I-Vt., encouraged supporters of his presidential campaign on Wednesday to join unions in protesting the event.

Walker responded Thursday afternoon with a thread of tweets, starting with “@BernieSanders Don’t let the facts get in the way of your political rhetoric.”

Walker touted Wisconsin’s record-low unemployment during his tenure as governor and his union bill, which he said “took the power from the big government union bosses and gave it to the hard-working taxpayers.”

“I think Phil Scott made a bad mistake bringing this guy here,” Cox said. “The Republican Party is just about dead in this state, and the reason they are is they admire people like Scott Walker.”

Correction: The union chapter chaired by Dwight Brown was incorrect in a previous version of this article. It is the AFSCME Local 1343 Burlington Schools Chapter.

Thanks for reporting an error with the story, "Hundreds turn out in Burlington to protest former Wisconsin governor ..."