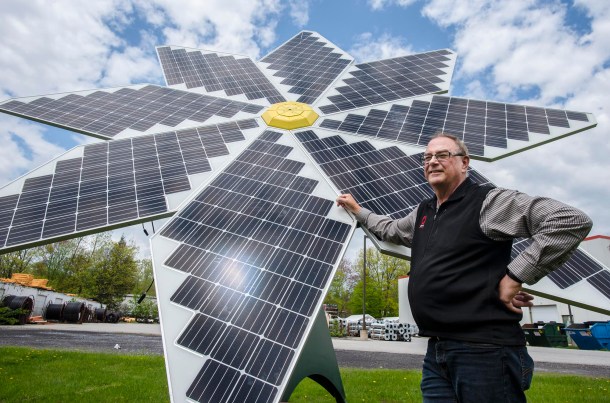 David Blittersdorf, president and CEO of AllEarth Renewables in Williston with a Power Flower solar tracker on Monday. Photo by Glenn Russell/VTDigger

David Blittersdorf is a Pittsford native who has made his name in Vermont with renewable energy businesses, first with NRG Systems, the Hinesburg wind company he founded in 1982, and then as a wind and solar developer. Blittersdorf in 2009 started AllEarth Renewables, a multifaceted solar equipment designer and manufacturer in Williston.

Blittersdorf, 62, has been animated since high school by a commitment to finding alternatives to fossil fuels. He earned a Bachelor of Science in mechanical engineering from the University of Vermont and holds an honorary Ph.D. from Wentworth Institute of Technology. He co-founded Renewable Energy Vermont, and he’s on the advisory board for the University of Vermont’s Rubenstein School of Environment and Natural Resources and Vermont Manufacturing Extension Center. He’s on the board of Vermont Businesses for Social Responsibility, Net Zero Vermont, and Post Carbon Institute, and he’s a trustee for Wentworth.

Lately, Blittersdorf has been promoting the use of passenger rail with a fleet of 12 self-propelled, stainless steel diesel Budd cars. He’s also a managing member at Aeolus Labs in Bristol, a company with a wind tunnel that’s used to provide wind speed measurements for the renewable energy industry. Meanwhile, he’s developing a 5-megawatt wind farm in Russell, Massachusetts, and has been trying since 2016 to build a 2.2 megawatt wind turbine permitted in the Northeast Kingdom town of Holland.

He’s also extending the reach of [AllEarth Renewables], a company that makes and sells the wind trackers that move solar panels into the path of the sun. AllEarth Renewables and its handful of side companies has about 35 employees and has sold 6,500 solar trackers, 2,500 of them in Vermont. In April, Blittersdorf started RENewed Wind and Solar, another side business, this one focused on refurbishing and selling used solar and wind power equipment.

Blittersdorf spent some time telling VTDigger about what he’s up to and why. The interview has been edited for length and clarity.

VTDigger: Is there money to be made in fixing up and reselling renewable energy equipment?

David Blittersdorf: A little bit. People are sort of getting rid of this stuff at salvage pricing. What will happen is the site didn’t work out, or the developer took off, or things didn’t work out for permitting, so the people who call me want it taken down and nobody is around to do it. They’re worried about someone competently taking down things that are 200 feet tall. They say, ‘As long as you have insurance, we’ll let you do it.” We know how to do it.

I like to vacation in the spring in the Outer Banks. About four years ago, my partner and I drove down and there was one of NRG’s wind-measuring towers that a person wanted to get off their farm field. They weren’t using it anymore, and the developer had gone bankrupt. I got the tower and everything for free. We spent two days taking it apart, loading it onto a trailer and taking it out. It was brand new and worth $18,000 – and it’s worth in the order of $4,000 as a refurbished system.

VTD: I hope that was your business partner you were with, not your romantic partner.

DB: It was my romantic partner. She’s a real sport. We had a good dinner afterwards, and lots of Advil.

VTD: Do you have a warehouse full of recently reclaimed solar panels and wind equipment?

DB: The building in Williston is chock-full of solar panels. There’s new stuff, old stuff; the yard is full of things. That’s why I have to sell some of this stuff.

Basically it’s wind and solar equipment that has been acquired for a variety of reasons over the years. Some of it was useful at one time and is no longer used. Instead of sitting in a warehouse at our manufacturing facility, we thought this stuff should be used. 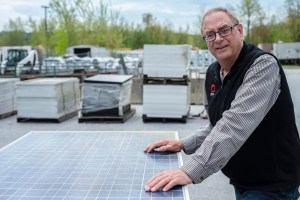 DB: It has been proven that solar panels will last 50-plus years. They just have slightly less output every year. It would be horrible for society to landfill them. They can just be used over and over; it’s a different way of looking things.

It would make no sense to take these apart and try to get all the metals out until they’re really not useful.

In 50 years, they may only put out 60 percent of the original power, because they degrade a little every year. But by re-deploying them into other applications, you can still use them.

VTD: Why not just sell this stuff on eBay?

DB: The knowledgeable people will come to a place of expertise. I have actually bought some stuff off eBay. People don’t know what they are doing when they put them up there. Some of these are towers we built. I say, “Hey guys, you want $4,000 for this thing. I know how to ship it; I’ll take it for $1,000.”

eBay is not the right marketplace because it’s not structured with expertise behind it. Plus, I don’t want to be selling to just anybody. I am trying to sell to people in the trade who can use this stuff.

There’s probably a few hundred people in the U.S. who do this work, and I personally know probably 50 of them. Since we’re the designers of it, we have all the manuals and we know how it works. We make sure it’s like brand-new workable, it’s just older.

VTD: What would you like to see happen with the train cars? 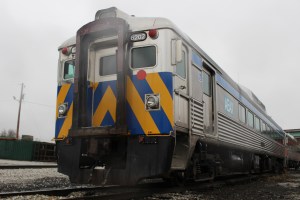 This is one of 12 train cars that energy developer David Blittersdorf has purchased for a commuter rail service he plans in Vermont. Photo by Mike Polhamus/VTDigger

We think the first thing we might be able to get done quickly is between Montpelier and Barre; there’s a seven-mile line there that is basically not being used, and there’s a lot of people going between those two cities. The cars I have are self-contained, self-driving, bi-directional, with two redundant diesel engines, and they don’t need a locomotive to pull them.

We need to get out of the car. I don’t believe in the electric car is going to save us.

VTD: What’s happening with the gondola you proposed between the National Life campus and downtown Montpelier?

DB: I’m willing to put it in; I just can’t get anybody to move on it. Change is tough for normal people, and I tend to be visionary. I’m a marketer, engineer, designer, and looking at new ways to do stuff that will fit into a more sustainable world.

What we have done in this world is not sustainable. We have this climate crisis. We’ll get there, but we might be too late. We have to do this stuff as fast as we can.

Thanks for reporting an error with the story, "Q&A: Renewable energy entrepreneur David Blittersdorf: Change is..."