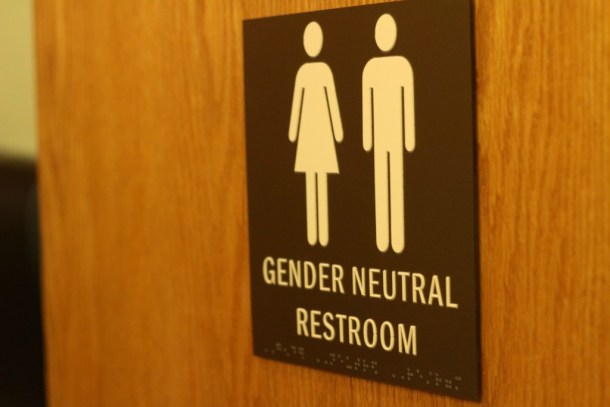 A gender-neutral bathroom in the Vermont Statehouse. Photo by Erin Mansfield/VTDigger

[T]he head of Vermont’s Human Rights Commission says most businesses are not in compliance with a new gender-free bathroom law that she is in charge of implementing.

“In virtually every business that I have been in from restaurants to retail stores to car dealerships, the signage has been out of compliance with the new standards,” Karen Richards, the commission’s executive director, said in a statement released Monday.

Vermont’s Legislature passed H.333, known as the “the bathroom bill,” this spring. The law requires all single-user public restrooms to be available for all genders, and marked accordingly.

Richards said that since the law was passed she has frequented several business places to notify staff of the law.

“Essentially what I get is sort of a look of shock and confusion, and I’ll let somebody know and nothing seems to happen after that,” she said.

The law was passed to provide equal restroom access for transgender and non-binary individuals -- those who don’t identify as men or women -- and people with disabilities who have a caregiver of the opposite sex.

The state recommends that business owners simply remove gender-specific icons or words from their bathroom entrances, and add a sign that says “restroom.”

“I’m not sure that people are intentionally trying to be non-compliant, I think it’s simply a lack of awareness, because it's a very simple fix,” Richards said.

Richards said she hopes the lack of understanding can be addressed through increased communication, such as Monday’s press release.

The commission will not take enforcement action against businesses unless it receives specific complaints that the new law is not being followed, and will then contact owners about coming into compliance. The human rights commission has received one complaint so far about restroom signage since the law went into effect.

Vermont state offices have acted quickly to adapt to the new requirement, Richards said. The Vermont Retail and Grocers’ Association notified members through a memo, she added.

While the human rights commission is charged with enforcement of the law, inspection falls under the Department of Public Safety’s Division of Fire Safety.

“Compliance is easy and inexpensive which should reduce the need for enforcement,” Michael Desrochers, the division’s director, said in the statement.

Rep. Selene Colburn, P-Burlington, introduced the legislation in the House last year. She said she was inspired by four months of protests at the University of Vermont two years ago. Students were demanding gender-neutral bathrooms in all buildings, including in the library where Colburn works.

Over the past two years, the House and Senate heard testimony about the difficulties faced by transgender individuals, particularly youth. Colburn said after the bill signing that children and families shared stories about having to “map out” safe places to use the restroom.

“While this doesn’t completely solve all problems (transgender people) face,” she said in May, “this will hopefully add more points that they can add onto their maps.”

Gov. Phil Scott signed the legislation into law at a bill-signing ceremony in May.

“For many transgender and gender non-conforming Vermonters, having bathrooms labeled male or female creates social stress and discomfort or instances where you face hostility and mistreatment,” Scott said at the ceremony.

Richards, of the human rights commission, described the law as “kind of common sense.”

“This is really helpful to everyone who needs to use the restroom, because it just makes more restrooms available for everyone,” she said.

Thanks for reporting an error with the story, "Businesses not complying with gender-neutral bathroom law"