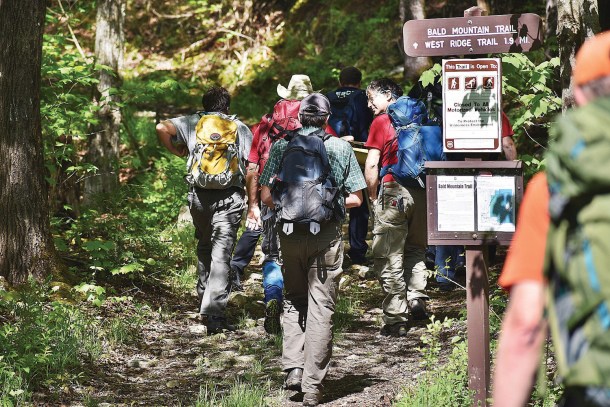 Vermont State Police recovery teams head up Bald Mountain on Monday morning, to the site of the crash of a twin-engine aircraft Sunday night. Photo by Holly Pelczynski/Bennington Banner

This story by Patricia LeBoeuf and David LaChance was published by the Bennington Banner on May 21.

[W]OODFORD — The pilot of a twin-engine aircraft that crashed into Bald Mountain on Sunday was found dead at the heavily wooded crash site just after 1 a.m. Monday, according to Vermont State Police.

The pilot was alone, according to the Federal Aviation Administration. Vermont State Police Monday evening identified the pilot and single occupant as Ramsey Sampson Ah-Nee, 31, of Manchester, Connecticut.

Ah-Nee was described as an experienced pilot with five-plus years of aviation experience. The aircraft was identified as a Piper PA-34 Seneca.

Preliminary information from the FAA indicates that the plane left from Burlington International Airport en route to Waterbury-Oxford Airport in Oxford, Connecticut.

The crash site is in a heavily wooded area of town, approximately three miles off Route 9, police said.

The plane was not expected at any Vermont airports, said Trini Brassard, assistant director of policy, planning, and intermodal development with the Vermont Agency of Transportation.

Pilots flying into Vermont airports usually call ahead to check on conditions. They aren’t required to contact airports if they are merely flying in their area, she said.

State police said they activated search and rescue teams after receiving a report from the Federal Aviation Administration at 5:56 p.m. Sunday that an aircraft had been lost in the vicinity of Bald Mountain. The FAA provided the last known coordinates of the aircraft before it had lost radar confirmation, and the flight plan.

Brassard said that to her knowledge, there were no adverse weather conditions in the area at the time the plane crashed. The National Weather Service reported overcast skies at the time.

Bill Greenwald, manager of Harriman and West Airport in North Adams, Massachusetts, got a call from air traffic control Sunday afternoon. They were looking for the plane that had disappeared from radar.

They asked him if the plane had landed at Harriman and West, but it had not, he said. Search and rescue teams, consisting of state police uniformed troopers, state police search and rescue personnel, and Vermont Fish and Wildlife wardens, spread out Sunday night as darkness was falling.

Recovery personnel and state police detectives headed to the area Monday to assess the scene and prepare for the recovery of the pilot’s body. State and local officials are working jointly with the FAA and the National Transportation Safety Board to support and assist with the investigation and recovery efforts.

Thanks for reporting an error with the story, "UPDATED: 1 dead in Bennington County plane crash"