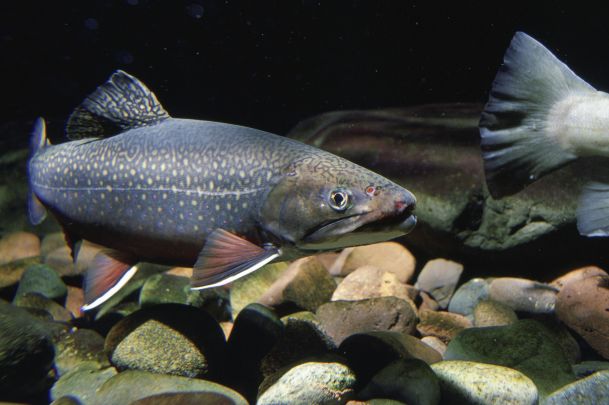 [I]n the run-up to the start of trout season on Saturday, the Vermont Council of Trout Unlimited called for halving the daily catch limit for brook trout, Vermont’s official state cold water fish, from 12 per day to six.

The state’s current regulations are “out of balance,” Clark Amadon, president of the Mad Dog Trout Unlimited Chapter, said in an interview on Wednesday. The organization wants the state to provide brook trout “the same level of protection offered to non-native trout species in Vermont."

Brook trout are the only native stream-dwelling trout species in Vermont. They require clean, cold water , and tend to favor streams at higher elevations. Rainbow and brown trout were introduced to Vermont in the 1800s, and are less sensitive to water quality and stream temperature.

Vermont's fishing regulations have a creel limit, or daily harvest, of 12 fish per day for brook trout, while the limit for rainbow and brown trout is six.

The 14-member board -- representing the state’s 14 counties, appointed by the governor -- is responsible for regulating fishing, hunting and trapping, based on recommendations from the Department of Fish and Wildlife and concerns of citizens and advocacy groups.

Porter said while the current creel limit could have “some impact on local populations,” there is no evidence that brook trout populations in Vermont are affected by the creel limit. The number of fish harvested is actually down in Vermont, he said, a result of the increasing popularity of catch and release fishing.

"All the evidence points to the fact that things like dams, lack of tree cover over streams, sediments and other pollutants in the water, and climate change may have an impact on the (brook trout) population," Porter said.

Streams such as Dog River and Batten Kill, where fish populations are not as healthy, already do have lower catch limits, he said.

Vermont’s regulations once had a 12-fish daily limit for all stream-dwelling trout, Richard Kirn, a fisheries biologist with the Vermont Department of Fish and Wildlife, said.

Rainbow and brown trout tend to be larger than brook trout. The lower catch limits were imposed because they tend to inhabit the lower reaches of streams, which are more accessible, Kirn said.
In contrast, Kirn said, brook trout inhabit "hundreds of miles of streams in Vermont," constituting a more "diffuse fishery.”

Kirn added that since "there’s not a lot of biomass in brook trout," therefore more are required to provide the same amount of sustenance as their non-native counterparts.

"There are people who are fishing for consumption who like the creel limit the way it is," said Kirn.

"A lot of the creel limit discussion tends to be more philosophical than biological," said Kirn. "Some people feel that it's not sending a good conservation message to have a high limit."

Amadon agreed the Vermont brook trout populations are currently healthy. He said reducing the creel limit amounted to a preemptive measure, maintaining a resilient population in preparation for the impact of climate change on coldwater streams.

The Vermont Agency of Natural Resources’ Climate Change Adaptation Framework has stated that “coldwater habitats and species associated with river and lake habitats (e.g., brook trout and eastern pearlshell mussel) are expected to be highly vulnerable to climate change.”

"There is a role for organizations like ours, to take a look at regulations and make recommendations when we feel it's necessary," Amadon said.

Thanks for reporting an error with the story, "Anglers seek lower catch limits for Vermont’s state cold-water fish"