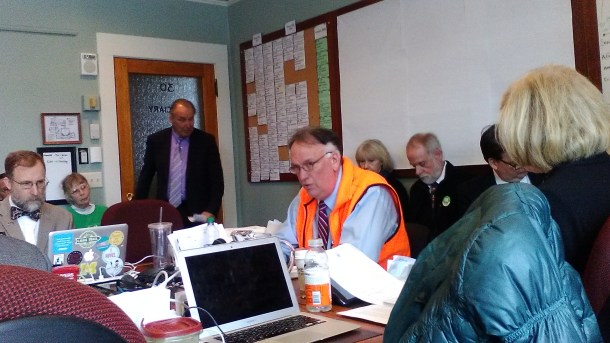 Chris Bradley, president of the Vermont Federation of Sportsmen’s Clubs, in the blaze orange vest, testifies earlier this month before the House Judiciary Committee in opposition to proposed gun legislation, including expanded background checks as well as other proposed restrictions on gun ownership. To his right, sits Rep. Martin LaLonde, D-South Burlington. Photo by Alan J. Keays/VTDigger

A leading Vermont gun rights group says it will hand out 1,200 unloaded 30-round gun magazines on the Statehouse lawn on Saturday in protest of a law banning the devices that was passed by the Senate Friday.

Backers of the bill say that limiting magazine capacity will reduce the lethality of firearms, while opponents say it is infringement of their constitutional right to bear arms, and a disadvantage against criminal attackers.

Chris Bradley, president of the Vermont Federation of Sportsmen’s Clubs, said that he was coordinating the event with Rob Curtis, executive editor of RECOIL, which describes itself as a “firearm lifestyle magazine.” Curtis’ LinkedIn profile says he lives in Williston.

“These are free magazines out of the box,” Bradley said in an interview Friday night, “to be given out to the first 1,200 Vermonters who would like to have one.”

An article on RECOIL’s website said the donation of the 30-round PMAG standard capacity rifle magazines was spearheaded by Duane Liptak, director of product management and marketing at Magpul, a manufacturer of firearm accessories.

“His swift action means we will get the magazines here before Gov. Phil Scott signs S.55 into law, trampling the rights of law-abiding Vermonters,” the articles says.

Rep. Martin LaLonde, D-South Burlington, who proposed the amendment that includes the magazine limit, said during debate on the House floor the provision “could mean the difference between life and death.”

“Let’s say a shooter has to use 10-round magazines instead of magazines that hold 30, 50, or 100 rounds,” LaLonde said. “In that case, for every 100 rounds fired, that 10-round limit would afford six to nine more chances for bystanders or law enforcement to intervene during a pause in firing.”

That would also mean more chance for something to go wrong during a magazine change, and more chances for potential victims to find safety during a pause in the fire, he said.

Scott held a press conference immediately after the Senate vote on Friday saying he supported the bill.

Scott entered office last year holding the position that no new guns laws were needed in Vermont. His opinion on that changed after teenager Jack Sawyer was arrested in Rutland County for allegedly hatching detailed plans to shoot up Fair Haven Union High School. He has said that soul searching following that event led him to decide that he needed to take action against gun violence, despite the potential political repercussions.

He has been hammered by gun rights groups, including one that mailed out postcards earlier this month showing a doctored photo of Scott as a child being carried by former New York City Mayor Michael Bloomberg and California Sen. Dianne Feinstein, both liberal supporters of greater gun control. “Is Vermont Governor Phil Scott Feinstein & Bloomberg’s gun control lovechild?” the postcard asks.

Bradley said those who turn out for Saturday’s event will be asked to help fund legal challenges to S.55 once it is signed into law.

“This is ripe for a court challenge,” Bradley said.

Vermont’s law exempts magazines that have already been purchased from the ban, but would outlaw any purchase, transfer or possession of new magazines once the law comes into force.

The Vermont Office of the Attorney General said that because of that “grandfather” clause, the law would be “largely unenforceable,” as magazines generally do not have serial numbers or manufacturing dates imprinted on them.

Asked how the magazine ban would hurt gun owners, Bradley said it would make them more vulnerable to attackers. In a situation where a heavily armed attacker broke into someone’s house, for example, a law-abiding citizen would be limited to a firearm with 10 to 15 bullets. “In a defense situation where someone is attacking, the criminal has all the advantage,” he said.

Thanks for reporting an error with the story, "Gun rights group plans magazine handout in protest of law"