[O]ver a two year period, hundreds of people who were ordered by the courts to receive mental health treatment have been added to a database that is used to restrict gun purchases, according to a report from the Vermont court system.

Under a new state law enacted in 2015, the courts are required to report people who are put in the custody of the Department of Mental Health to the National Instant Criminal Background Check System — a federal database that gun stores are required to check before authorizing a sale. Vermont statute is similar to a federal law that prohibits the sale of guns to convicted violent felons and people who have had court-ordered mental health treatment. 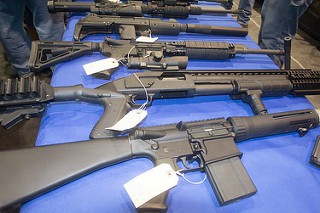 The reporting requirement went into effect Oct. 1, 2015. The law also created a new misdemeanor for possession of a firearm by people who were convicted of serious violent crimes, including aggravated assault, murder and other “listed” crimes.

Evan Hughes of the Vermont Federation of Sportsmen’s Clubs said the number of people added to the national database has been fairly modest. “It hasn’t been any massive sweeping up of people,” he said.

When the bill was moving through the Statehouse, the federation worried that the policy change might dissuade some people from getting mental health treatment. He said the group has many members who are veterans, and they wanted to ensure that people who may want mental health support were not deterred because of the policy.

“One of the things that we were concerned about in the enactment of the law was that people weren’t discouraged from seeking help,” Hughes said.

Wilda White of Vermont Psychiatric Survivors said that the notice that people received from the state alerting them that they had been reported to NICS was “pretty alarming.”

Many people who are subject to mental health orders go through the process without ever appearing before a judge, White said. The process may play out in a hospital, then the paperwork is transferred to the courts, she said.

“They don’t understand that they’re going to be reported to the database,” she said.

White said she was not surprised by the number of people reported to NICS as a result of a change in the law.

“I think what’s alarming about it is how much the state is relying on forced drugging and without any judicial scrutiny,” she said.

Thanks for reporting an error with the story, "Nearly 600 added to gun background check database"