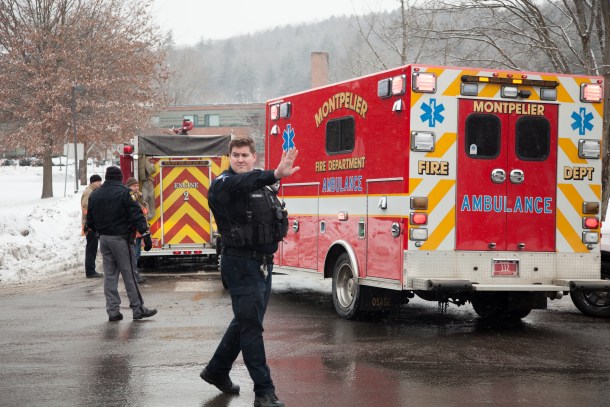 Montpelier High School was placed on lockdown Tuesday during a standoff with an armed robbery suspect. Photo by Mike Dougherty/VTDigger

Vermont State Police say that a pistol a man displayed during a standoff Tuesday on a field at Montpelier High School, prompting nine officers to open fire and kill him, was a BB gun.

A day after the shooting, police said Wednesday their investigation has identified the silver handgun Nathan Giffin, 32, of Essex, was holding at the time he was fatally shot was a Umarex 40XP BB pistol.

“I certainly can’t rationalize why someone would do this, I don’t know if there is an explanation, but certainly if you want people to believe that you have a real gun, this is as close as you can get,” Maj. Glenn Hall, head of the state police criminal division, said Wednesday of the BB gun.

“They look real,” he added. “It would be literally impossible for anyone to tell it’s not real, from a distance certainly, and even sometimes up close.”

Police on Wednesday released a photo of the BB gun. Hall said that he wasn’t sure at this time if the BB gun was loaded, adding he had not yet seen the “crime scene report.”

Hall also said he couldn’t say at this point how many total shots were fired by the officers, or how many times Giffin had been shot.

WCAX-TV posted a video of the shooting Tuesday online. Seconds before shots rang out Giffin can be seen in video holding the BB gun in his right hand, and it appears to be pointed downward.

He did say each officer who fired a shot is being interviewed separately as part of the probe. Investigators also want to interview any people who witnessed events leading up to shooting as well as the shooting itself, Hall said.

Police say Giffin had fled to the field at the high school Tuesday morning after robbing the Vermont State Employees Credit Union at 1 Bailey Ave., just a short distance from the high school. 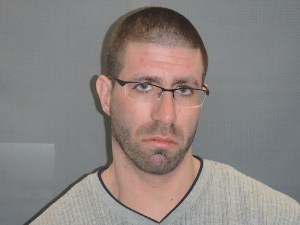 Police confronted Giffin on the grounds of the high school and a standoff ensued lasting about 50 minutes while the nearby school was in lockdown. Officers from several law enforcement agencies also swarmed to the scene.

Police said they tried to negotiate with Giffin, who they say was making threatening statements toward law enforcement as well as suicidal statements.

In a release issued Tuesday police said, “Giffin continued to display the handgun and ignored orders from officers to surrender his handgun. At this time multiple officers of the Vermont State Police and Montpelier Police Department shot Giffin.”

Hall said Wednesday he didn’t yet know from investigators how much, if at all, Giffin struggled with them while he was on the ground after getting shot, or if police handcuffed him after the shooting.

“That would be part of the investigation,” he said. “I don’t think it would be unusual for a suspect to be handcuffed in a situation like that.”

On Tuesday afternoon Giffin’s body was taken from the Central Vermont Medical Center in Berlin to the Office of the Chief Medical Examiner in Burlington. State police said that as of late Wednesday afternoon the autopsy results remain pending.

Montpelier Police referred questions Wednesday about the shooting to Vermont State Police, who are heading up the investigation.

The state police investigation will be reviewed by the Washington County state’s attorney and attorney general’s office to determine if the officers were justified in their use of deadly force, which is customary for all officer-involved shootings.

Police on Wednesday also released the identity of the eight troopers and one Montpelier officer who fired shots. Under the department’s policy, the names of the troopers are withheld for 24 hours or “as otherwise determined” by the commissioner of public safety.

Two of the troopers identified also fired shots in a standoff last summer that left a Poultney man dead. Michael Battles was also wielding a BB gun. The officers were put on administrative leave and were eventually cleared after an investigation by the Vermont attorney general’s office and the Rutland County state’s attorney’s office. 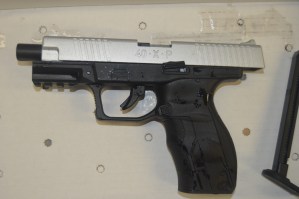 State police identified the names of the other officers firing shots, their assignments and dates of hire as:

The officers have been placed on paid administrative leave pursuant to Vermont State Police policy.

According to federal court records, Giffin was sentenced in 2012 to two years in prison for the gunpoint robbery of the Randolph National Bank in Williamstown in 2010.

His criminal record dates back to 2002, according to police, and includes convictions for cocaine possession, resisting arrest, petty larceny, unlawful trespassing and multiple burglaries.

Giffin was arrested most recently for the Christmas Day break-ins of Walmart and Toys R Us in Williston, according to a release from the Williston Police Department. While there was property damage as a result of the break-ins, nothing was stolen from either store.

He was originally released on a citation to appear Thursday in Chittenden County criminal court in Burlington to answer to those charges, the police statement added.

In an affidavit filed with the Williston police shortly after the robbery, Giffin told officers he was addicted to cocaine and heroin. He said he was “sick of living like this” and wanted to change his life, but couldn’t get treatment. When he was cited with burglary, Giffin called the police department and told an officer that he had checked himself into rehab and would not be out until Jan. 22. His arraignment was moved to Jan. 30 “to accommodate his rehab treatment.”

Thanks for reporting an error with the story, "UPDATED: Robbery suspect killed in Montpelier standoff armed with BB ..."