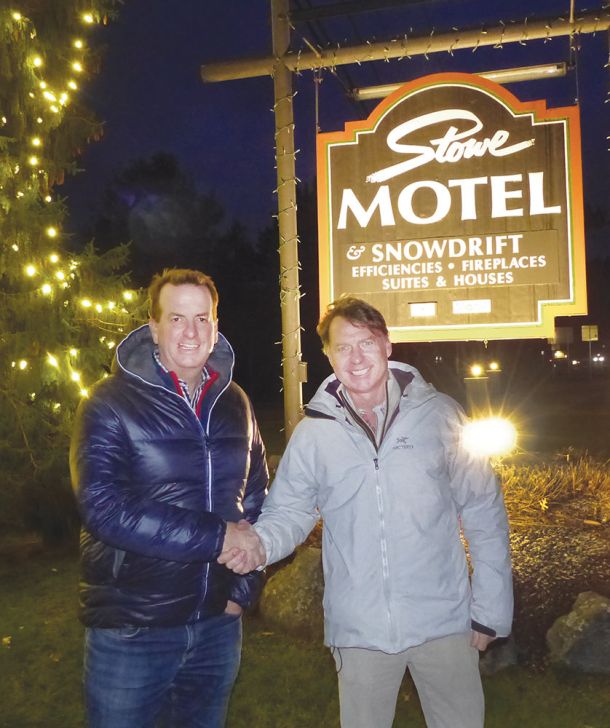 Sean Kearney of Stowe and Ted Steers of Vail, Colorado, are the new owners of the Stowe Motel. Courtesy photo

(This is a combination of two stories, one by Caleigh Cross, that were published in the Stowe Reporter in December.)

[T]he new owners of Stowe Motel say they plan to keep running it as a motel for the foreseeable future.

Sean Kearney of Stowe and Ted Steers of Vail, Colorado, paid $2.6 million for the property that includes the Stowe Motel & Snowdrift. The pair bought the property from longtime owner Carolyn Ruschp, who had been looking for a buyer for some time.

At nearly 12 acres, it is one of the largest developable properties left along Mountain Road, and it’s zoned for commercial use. It includes two main motel buildings and five houses, currently used as vacation rentals.

“It’s been kind of a whirlwind,” Kearney said. He and Steers, a Stowe native, had been watching the property for a while, trying to decide whether to buy it. They pulled the trigger Nov. 2 because of the staff, most of whom have been working at Stowe Motel for over a decade.

“The key for us to buy it was that the staff has been there as long-term employees who know how to run the place, which was attractive to us,” Kearney said.

Ruschp said she plans to work limited hours until April.

Kearney and Steers invest in commercial properties around the country, and Steers is a Realtor in Vail. Kearney doesn’t yet know what the next stage of the Stowe Motel’s life will look like.

“We definitely plan to do something with it down the road,” Kearney said.

The location was considered as a third location for Vermont Country Store, but that $2.4 million deal fell apart earlier this year.

Carolyn Ruschp will tell you she’s done, and it’s a relief to have sold the Stowe Motel & Snowdrift after 40 years, but as she says it, her eyes grow a little too bright.

In November, Ruschp sold the motel where her children grew up, where her first husband died and where she has spent most of her life. She’s been trying to sell the Stowe Motel since 1997, so to finally unload the property, with its 56 rooms, five houses and two huge buildings, is a goal realized.

It’s bittersweet all the same, though. Ruschp, 71, is looking forward to “playing,” as she puts it — travel, skiing, hiking, biking and spending time with her children. She’d like to go to Africa and Iceland, and fly-fish in Idaho with her husband.

First, though, she has to “clean up her act,” boxing up 40 years of guests, crises, holidays and day-to-day life as the owner of one of Stowe’s largest and most well-known local inns. 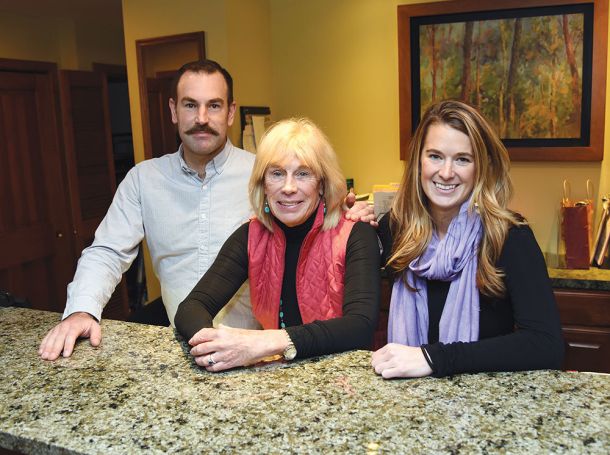 Carolyn Ruschp with son Andrew and daughter Alli at the Stowe Motel & Snowdrift after it was sold in November for $2.6 million. The Ruschp family owned the motel for 40 years. Photo by Gordon Miller/Stowe Reporter

It’s impossible to tell the Stowe Motel’s story without also telling the story of the Ruschp family.

Its late patriarch, Peter Ruschp, was on the U.S. Olympic Ski Team in the 1960s, although a broken back in 1966 sidelined his burgeoning career. Ruschp took over the ski school at Stowe Mountain Resort, which his father, Sepp Ruschp, founded after coming to the U.S. from Austria in the 1930s.

By the time Peter Ruschp was directing the ski school, he and Carolyn already owned the Stowe Motel; they bought it in 1977 after moving to Stowe from Long Island, New York, in 1968. Carolyn had been waitressing, and the pair had been teaching skiing at the resort before Peter took a more permanent job directing the school.

Peter’s father wanted to make sure the two stayed in Stowe, so he urged them to buy the Stowe Motel.

The couple bought the Snowdrift in 1995 and after considerable financial investment, added it to the offerings at Stowe Motel.

Ten years later, Peter Ruschp died at 61, leaving Carolyn, his wife of 32 years, and their two children, Andrew, then 27, and Alli, then 18, to run the motel.

When Ruschp first considered selling, she was advised by a real estate agent friend to hold on to it, use it as an income source and scale back her personal involvement.

Three years ago, Ruschp married Walt Levering of Stowe, and she’s held on to the Stowe Motel & Snowdrift for 20 years longer than she’d planned. Letting it go is the first step into the next adventure.

“I look back on the whole thing” fondly, Ruschp said. “People say to me, ‘Oh, it’s got to be so awful dealing with people all the time,’ and it’s not. The people are the best part of the job. It’s not like people think it is. The type of guests that we get here are family. It’s been like that from the beginning.”

The business of running an inn has gotten harder, though.

“Now, with computers and online bookings and trying to keep up with all of that, it’s much more difficult and it takes much more time. I could run this singlehandedly back then. It would be impossible” now, Ruschp said.

Although the pages of Stowe’s story have gotten glossier, bringing in higher-end operations and culminating with the Vail Resorts $41 million purchase of Stowe Mountain Resort’s ski operations in June, the skiers Ruschp sees every winter are the same as they’ve always been, and there are just as many small, locally run inns as there were when she and Peter got into the game.

“I think some high-end people have come into town and bought second homes, but I don’t think the Stowe skiers have changed at all. I think Stowe Mountain Lodge tried to change the skier with their clientele, but the rest of the skiers that come into town are down-to-earth, hard skiers” who come for a place to crash and recuperate after a hard day shredding the slopes, Ruschp said.

Ruschp estimates she’s had a problem guest once every five years or so. That’s just eight guests who have caused the now-12-person Stowe Motel & Snowdrift staff to scratch their heads over a 40-year run.

Not bad, if the math checks out.

That doesn’t mean the Ruschps haven’t found themselves in stressful situations, though.

“The scariest times are when you’re full, and something breaks and you have no flexibility to move somebody around,” Ruschp said. When there’s vacancy, “you upgrade them to a better room and you do whatever it takes,” but that’s impossible with a full house, so “you call up the plumber at 3 in the morning. You do whatever it takes to make it work. It’s hard,” Ruschp said. “You have to have a sense of humor; you have to be flexible.”

She remembers one Christmas morning when a pipe burst in one of the houses.

“When Deb went out there to do continental breakfast and open it up, there were 6 inches of water on the floor — on Christmas morning,” Ruschp said. “My kids were up on the mountain, and I texted them, ‘I have a little water problem. When you’re done skiing, could you please stop by the motel?’”

“I remember that,” said Nancy Sichler, who’s worked the front desk at Stowe Motel for 23 years.

“My mom, my brother and I spent the day Christmas Day” bailing water out of that building, recalled Alli Ruschp, Carolyn’s daughter.

“We had to put it into buckets and pump it out of the basement,” Carolyn Ruschp said.

“It’s been a funny place to work,” Carolyn said. 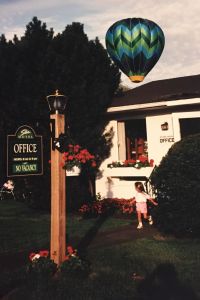 Stowe Motel & Snowdrift was a great place to grow up, Alli Ruschp said.

Her first memory is learning to ride her bike on the half-circle driveway.

“I learned how to run, walk, bike, swim right there,” Alli remembered.

Until 2003, the family lived in a house attached to the inn, which had the only bathroom for staff and some guests, so people would come in and out of the house all the time.

“It was kind of a fun childhood, having people in and out of your house. I made friends with every little kid that showed up. I would go knock on their doors and ask them to play with me. I was always there,” Alli said.

The inn’s spacious rooms and on-site pool made Alli popular during her time at Stowe Middle School and Stowe High School, she said, although she switched to boarding school her sophomore year.

“We would host it because we had the space. We would invite everyone from the school to come over. Basically, my whole class would come swimming,” Alli said.

Her first job, at 6 years old, was delivering handwritten messages to rooms, since there weren’t individual phone lines for each room.

Later, she’d help clean the pool, and she can remember being paid $5 if she filled a trash bag with pine cones and other debris.

Alli, now 31, is happy for her mother that Stowe Motel & Snowdrift has sold.

“My mom’s worked really hard her whole life. We’ve had a great life because of it. It’s all-consuming. It’s a little sad, but exciting. My mom desperately needs to retire,” Alli said.

Carolyn says she plans to stay on for three days per month until April, when she’ll turn out the lights for the last time in her office.

Thanks for reporting an error with the story, "Stowe Motel sold after 40 years in Ruschp family hands"