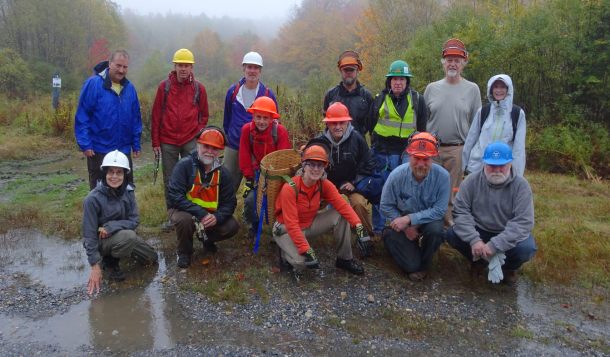 Volunteers with the Dutch Hill Alliance of Skiers and Hikers pose at the former Dutch Hill Ski Area in Readsboro during a trail-clearing work session. Photo courtesy of Tiger Waterman

[R]EADSBORO — All they need now is some snow, which shouldn't be a problem in this southern Vermont hill town.

Volunteers with the Dutch Hill Alliance of Skiers and Hikers have cleared some of the overgrown trails of the former downhill ski area off Route 100, carving out a winter recreation site for backcountry and cross-country skiing, sledding, snowshoeing and more.

“This is really looking nice,” said Bill Beattie, president of the organization. “We are excited. There is definitely going to be skiing this winter.”

He said volunteers from as far as Albany, New York, and Sutton, Massachusetts, had heard of the ongoing project and showed up for trail-opening work sessions during September and October. They were joined by members of the local organization — a recently formed chapter of the Catamount Trail Association — most of whom live in southern Vermont or nearby Berkshire County in Massachusetts. 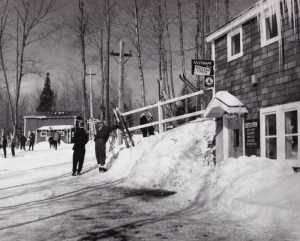 The Dutch Hill Ski Area in Readsboro in the early 1950s. Volunteers are working with the U.S. Forest Service to reopen some of the historic ski trails. Photo courtesy of the Vermont Ski and Snowboard Museum and UVM Landscape Change Program

Beattie said the work parties were held on weekends and during the week, with crews ranging from a high of 17 to a few individuals from the immediate area — known as the Heartwellville section of Readsboro.

Beattie lives about 8 miles away, in Clarksburg, Massachusetts.

The trail work is being undertaken in cooperation with the U.S. Forest Service, as the former ski area, which closed in 1985, now is part of the Green Mountain National Forest.

In late 2016, the Forest Service issued a management plan that covered timber harvesting, wildlife enhancement and recreation goals for thousands of acres of the national forest south of Route 9. As part of that plan, an 87-acre section of the northern half of the historic ski area was designated for nonmotorized winter recreation.

The Forest Service saw partnerships with volunteer groups as essential to carrying out some of the forest improvement initiatives. Members of DHASH, which organized and incorporated around the time the forest plan was rolled out, stepped in to help coordinate the Dutch Hill project and provide some labor.

Beattie said those considerations include not clear-cutting former ski trails to appear as they did when Dutch Hill was in operation, leaving a glade effect. From a skiing viewpoint, he said, the trees that are left standing are expected to provide some shade to help preserve the snow cover.

The former Yankee Doodle Trail at Dutch Hill has been opened, he said, along with another, more gradual trail to the summit for climbing using snowshoes or cross-country skis with traction enhancers called skins.

Yankee Doodle was considered an intermediate to expert trail for downhill skiing.

The old Dutch Meadows slope also was opened. That was a beginner’s slope, located close to the turnoff from Route 100, which will provide a wide area for skiing, sledding, tubing and similar activities.

Over time, the group plans to open and mark more former Dutch Hill trails in cooperation with the Forest Service, Beattie said. But at the moment volunteers have called a halt to the trail work during Vermont’s deer hunting season.

The former Dutch Hill, which opened in 1945 along with many other small areas during a post-World War II surge in interest in the sport, had a rope tow, T-bar and J-bar but no chair lifts. The lift equipment has been removed.

Thanks for reporting an error with the story, "Volunteers reopen trails at former Dutch Hill Ski Area"

Swanton man gets 20 years in prison for 2020 fatal shooting