Mike Smith is a regular columnist for VTDigger. He hosts the radio program “Open Mike with Mike Smith” on WDEV 550 AM and 96.1, 96.5, 98.3 and 101.9 FM and is a political analyst for WCAX-TV and WVMT radio. He was the secretary of administration and secretary of human services under former Gov. Jim Douglas and former state president of FairPoint Communications.

[I]t’s an oft-repeated phrase: “Those who cannot remember the past are condemned to repeat it."

In the past, Burlington Telecom, a city-owned internet, cable and phone company, discovered it was undercapitalized. In need of cash, it turned to the city administration. Unbeknownst to many, some officials agreed to transfer $17 million from the municipal general fund to Burlington Telecom.

This transfer was in violation of conditions imposed by state regulators. The reason regulators oppose this type of transfer is simple: Customers of Burlington Telecom should be the only ones supporting the enterprise, not Burlington taxpayers. 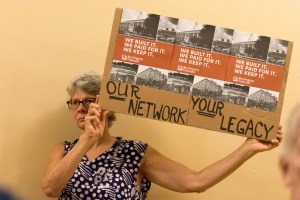 Although the $17 million was supposed to be quickly paid back, it never was.

The financial condition of Burlington Telecom grew worse when it reneged on its mandatory debt payments to the financial institution that had lent it money to build a fiber optic network.

Ultimately, regulators were incensed. The lender, Citibank, sued the city for $33 million and threatened further legal action to repossess the fiber network — even rip it out of the ground, if necessary. To complicate matters, the city’s credit rating was in a free fall over this financial mess.

Eventually, new city leadership negotiated a short-term solution that seemed to satisfy regulators, creditors, credit rating agencies and most residents. The agreement called for the city to sell Burlington Telecom once it was stabilized and its value enhanced.

The money generated from the sale is important because it will be used to pay off the current commitments of Burlington Telecom — which are substantial — and any remaining dollars will be split evenly between the city and Citibank. So the higher a responsible bid is, the more money the city and the bank will get, although neither will recoup the full amount lent to Burlington Telecom.

A review of the past is crucial because moving forward, the central question is this: Are Burlington city officials remembering those past mistakes when selecting a buyer for Burlington Telecom? With the passage of time we often forget or minimize unfortunate or painful events. What subverts good decision-making is self-imposed amnesia about previous bad decisions.

Monday night the Burlington City Council is to decide who will be the future owner of Burlington Telecom. It will be either Ting Inc., a wireless service and fiber internet provider based in Toronto; or Keep BT Local, an effort by some Burlington residents to buy Burlington Telecom and operate it as a co-op.

The two bidders seem to have the city’s best interest at heart. There are no bad guys here. These are honorable people making honorable proposals. With that said, the differences in the proposals are substantial, and so are the risks.

Proponents of Keep BT Local seem to acknowledge the financial advantage of the Ting proposal. But they point out that the co-op will be locally owned and operated, and argue that an important item that is being missed in their proposal is the intrinsic value in controlling your own company. They cite the city’s ownership of Burlington Electric as an example. And they point out that Ting could even resell this acquisition at any time.

But here are some problems with the co-op’s argument. First, Burlington Electric is a fully regulated monopoly with substantial financial reserves and a strong balance sheet. In contrast, the co-op will have to fight for customers in a highly competitive telecommunications market and will have limited reserves to tap if unforeseen expenses arise.

If the co-op finds itself in financial trouble, as Burlington Telecom did not so long ago, and without new investments, then the out-of-state Maine Fiber Co. likely would become the new owner because Burlington Telecom’s assets are pledged as collateral for the loan.

Further, according to city officials, there’s a potential legal risk in selecting the Keep BT Local bid. Citibank — one of the creditors that will split the remaining sale proceeds with the city — will look for the highest bidder with the hope of minimizing its losses. If the highest responsible bidder isn’t selected, Citibank may have solid legal grounds to sue the city.

Advocates can point to the fact that Doug Hoffer, the state auditor, has come out in support of Keep BT Local in a letter someone posted on Facebook. But it would be highly unlikely for the state auditor to intervene before the Public Utility Commission in this case. In fact, many were surprised by Hoffer’s endorsement. Normally an auditor would be quick to scold a state agency proposing a project under similar terms. Some Vermonters wonder how you can advocate one opinion, even as a private citizen, yet assert a higher standard as state auditor.

There’s a market risk that must be considered too. A small co-op may have the benefit of keeping it local, but it will also face challenges, especially as rapid change continues to roil the internet, cable and phone industries worldwide.

When selling WCAX, the Martin family — longtime local owners — said that trying to go against external market forces is “akin to being in a small, open boat in an ever-intensifying storm. The threats are many and the odds of survival are shrinking.”

Burlington does not live in a bubble. External forces will have an impact on the city. The City Council must take these factors into consideration.

Councilors will need to evaluate these two bids with the hope that their decision is not, as baseball legend Yogi Berra once said, “Déjà vu all over again.”

Thanks for reporting an error with the story, "Smith: Much is riding on Burlington Telecom decision"