A drawing from the latest plans for the new transit center in Montpelier shows the south elevation. Courtesy of city of Montpelier

(This story is by Ivan Shadis, a freelance writer from Montpelier.)

Montpelier expects to put the final major piece of the development puzzle into place this week for its long-awaited One Taylor Street transit center, allowing construction to start in the spring.

The project includes a publicly owned transportation hub operated by Green Mountain Transit, with an anticipated 90 stops there by buses a day; a connection of the bike path over the North Branch of the Winooski River; and three stories of apartments owned and developed by the nonprofit Downstreet Housing & Community Development.

“We’re trying to accomplish a lot with a small piece of property,” said City Manager Bill Fraser, ticking off the components. “The vision was that this would make a drastic change to the center of the community, and I think it will be different for the better.” 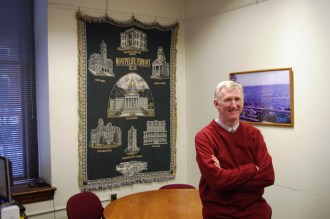 The city expects to close on the final property in the project’s right of way as early as this week. The commercial building that houses Montpelier Discount Beverage & Redemption Center sits in the path of the proposed bike path extension and is to be demolished.

“This is it. Once we buy this property we’re going,” Fraser said in an interview Friday. “It’s great.” With the acquisition of the beverage center the state will release design and construction funds. “From the time we close this deal next week we’ll immediately go into final design for all the projects and put everything out to bid.”

The project, which was first conceived nearly 20 years ago, has faced several hurdles. The site required extensive environmental remediation due to its prior industrial uses and securing right of ways took years. “It’s taken a lot of patience,” said Fraser. “We had environmental issues with the site, we had flood plain issues with the site — just that took five or six years. People saw the thing sitting there and nothing happening. (But) that wasn’t the case. We were getting the site ready to go.”

Most of the project will be built by the spring of 2019, Fraser said. All the permits are in place or were in progress as of last month, according to him.

The roots of the project go back to 1998, when the Montpelier Conservation Commission started asking what might be done with an old scrap yard at the confluence of the Winooski River and its North Branch. 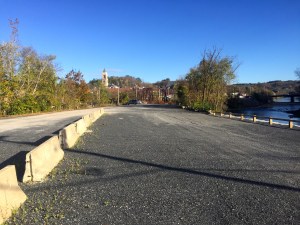 The property known as the Carr lot will be the site of the One Taylor Street project in Montpelier. Photo by Ivan Shadis

The project site has a long history as an industrial location and transport hub. Fire insurance maps going back more than a century show industry and railroad uses as early as 1884. Between 1884 and 1925 the site was variously used as a stone yard, railroad spur and railroad car house. From 1945 until at least 1976 it served as a scrapyard, and by the 1990s aerial photographs would show its use as a parking lot.

Taking the Conservation Commission’s cue, state and local planners drew up a vision for a transit center to be built on the property known as the Carr lot, and by 2002 the project had garnered upwards of $7 million in federal earmarks. To get the money the city had to conduct an environmental assessment of the site.

The industrial contamination unearthed was so significant that the lot was closed for public use, and a multiyear EPA-required analysis and mitigation planning process began.

Remediation did not begin until 2012, when, according to a letter Fraser wrote in response to citizen concerns over contamination on the site, then-owner Alan Carr had 876 tons of PCB-contaminated soil removed. According to the corrective action plan for the site, required by the state for the redevelopment of brownfields, construction must adhere to additional soil management requirements.

During this same period the project was thrown into uncertainty when new FEMA maps placed the Carr lot in the floodway, which would have precluded construction. The city conducted a hydraulic analysis and appealed the floodway determination, which was amended in the city’s favor a year later.

The plans were at risk again when federal jiggering after the 2008 financial crisis threatened a clawback of the earmarked money. 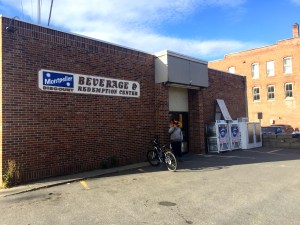 The Montpelier Discount Beverage & Redemption Center building is the last property the city needs for its One Taylor Street project. Photo by Ivan Shadis

In 2013 the city began to acquire properties and easements for the development. It bought two readily available parcels in 2013 but initiated eminent domain proceedings during negotiations with three property owners, including Carr.

In each case the owners agreed to sell, sometimes on favorable terms. For example, the city bought the Carr lot for $1.4 million, 150 percent of its appraised value.

In 2014, after the acquisition of the Carr lot, the city decided to bring in a private partner to take full advantage of the development opportunity. For the private component the city considered office space or a hotel before settling on housing. Census data show Montpelier’s rental vacancy rate at below 1 percent on average over the past five years. Montpelier’s City Council has listed housing development among its annual goals and priorities for the past four years.

The city selected Redstone, a Burlington-based developer, to build 40 units of market-rate housing above the transit center.

Hopes that construction would begin as early as 2016 were dashed as the city had trouble negotiating the purchase of easements for small strips of neighboring properties necessary for the project’s right of way.

Early this year Redstone pulled out, saying an uptick in construction costs had made the project unprofitable.

The fate of the housing element remained uncertain for months. Then on July 26 the city announced it had signed an option with Downstreet Housing & Community Development, a statewide nonprofit, to construct 30 residential units. At the signing Eileen Peltier, Downstreet’s executive director, announced plans to build a mix of affordable and market-rate rentals at the site.

Downstreet, established as the Central Vermont Community Land Trust in 1987, has had a hand in Montpelier’s two major affordable housing developments in the last 25 years, bringing a total of 75 units.

The organization also has plans to build 18 apartments in Montpelier’s French Block this year. Fraser said the group is basically the affordable housing developer for central Vermont. 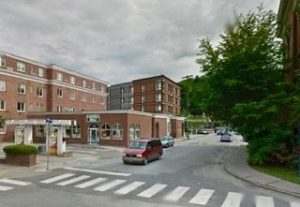 A drawing from the latest plans for the new transit center in Montpelier shows the view from State Street. In the foreground is the existing Capital Deli. Courtesy of city of Montpelier

Peltier said the decision to take the city up on the offer to build housing for the Taylor Street project was an easy one. “We know we have a need for housing in Montpelier, and it’s a rare opportunity to build new construction in a historic downtown in Vermont,” she said. “It was a no-brainer for us once we understood that the city had been able to address a lot of the environmental challenges at the site — challenges because of our funding sources.”

Downstreet will seek funding for the project from “six or seven different funding sources, state and federal dollars,” according to Peltier, who said several of those sources required an environmental assessment be done.

The nonprofit intends to obtain part of its financing from the U.S. Department of Housing and Urban Development, according to its agreement with the city. Pending HUD’s approval of an environmental review necessary for the release of funds, the city will sell the building rights to Downstreet for $110.

Peltier said she was very optimistic funding would come through. “It gets a lot of good checks in terms of being a good project that’s going to get funding,” she said. But she added that the funding environment is “always challenging within the administration we’re currently dealing with.” Peltier said she would receive notice of funding from the various sources between December and April.

Fraser said the city will move forward with its portion whether or not Downstreet secures its funding. “We wouldn’t be able to do the housing component,” he said. “We don’t have the wherewithal, we don’t have the funding, we don’t have the know-how. The transit center, the bike path, the bridge, all the other aspects of it, yes.”

The city’s part of the development alone involves federal, state, local, public and private monies. Money from two voter-approved bonds (one for $800,000 in 2002 and one for $710,000 in 2016); nearly $1.23 million in state grants and tax credits; and $7 million in federal grants have been assigned or spent on the public elements of the development.

A state grant reduced a million-dollar funding gap reported in 2016, but Fraser said he won’t know how tight the budget will be until final bids come in.

“At this point we’re confident that the project can move forward,” he said Friday.

Thanks for reporting an error with the story, "Land deal to clear way for Montpelier to transform part of downtown"