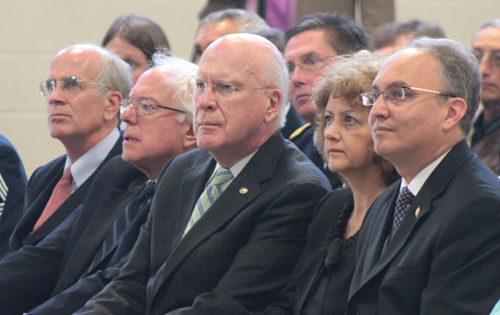 Trump’s executive order dismantles a key piece of the Affordable Care Act. Frustrations have mounted in the White House over stalled efforts in Congress to pass legislation to repeal and replace the Obama-era health care reform package.

Twice in recent months, GOP-led health care reform initiatives have failed to garner sufficient support among Republicans to pass in the Senate.

Some Republicans on Capitol Hill praised the president’s executive action, while Democrats accused the president of sabotaging the health care system and undermining ongoing bipartisan talks in Congress.

“This is gonna really hurt Vermonters and Americans,” said Mike Fisher, the chief health care advocate for Vermont Legal Aid. He urged policymakers to think beyond the Vermonters who will be directly affected.

“We shouldn’t think of the 13,000 Vermonters or the number of Americans who are impacted,” Fisher said. “The entire insurance market is destabilized by this and (it) will inevitably lead to higher rates for everyone.”

Both insurers would need to raise premiums further if they want to keep helping the people who will be thrown off cost-sharing reduction subsidies. Blue Cross estimates that, even if it spread the cost out among all of its 70,000 Vermont Health Connect customers, their premiums would go up another 1.9 percent on average.

Congress has not reauthorized a federally-funded health insurance program for low-income children. Additionally, the state of Vermont has reduced funding for Vermont Health Connect navigators, who help uninsured people understand how to choose health insurance.

“There really isn’t any time now” to change health insurance premiums for 2018, Teachout said. “We just want to work closely with the Green Mountain Care Board, the Legislature, and the administration to come up with solutions.”

Teachout said the company has been preparing for Nov. 1 open enrollment with the assumption the cost-sharing reductions wouldn’t be cut, and Trump’s action “just moves in the wrong direction.”

“Everything we’re trying to do here in Vermont is have more people covered, make it less expensive, improve health care outcomes, so this just moves in the opposite direction from everything we’ve been working for,” Teachout said.

The late-night announcement Thursday kicked off a flurry of reaction across the political spectrum in Washington.

Democrats, including members of Vermont’s delegation, and some moderate Republicans criticized the president’s order, arguing that it was an effort to sabotage the Affordable Care Act and that it undermines ongoing bipartisan talks in the Senate to stabilize the insurance markets.

Senate Minority Leader Chuck Schumer, D-NY, told reporters on a conference call that the order was “one of the worst things the president could do to sabotage our health care system.”

“After failing to convince Congress to repeal the Affordable Care Act, he is now openly sabotaging it, which will raise the premiums of hard working Americans by 20 percent,” Welch said.

Sen. Patrick Leahy, D-Vt., also blasted the move in a statement. He said the president’s actions “are just mean” — referring to news reports that Trump used the same word to describe a House-passed health care reform bill earlier this year.

“This is no longer the campaign, and health care policy is more than a partisan applause line,” Leahy said. “It is long past time for the President to realize that real lives are at stake.”

“Amazingly, we have a president who is trying to destroy the American health care system,” Sanders said in a statement.

Some Hill Republicans were quick to offer praise of the president’s move, including House Speaker Paul Ryan, who issued a statement calling the decision “a monumental affirmation of Congress’s authority and the separation of powers.”

However, leading Republicans in the Senate were quiet in the hours after the announcement.

Aides for Senate Majority Leader Mitch McConnell and Sen. Lamar Alexander, R-Tenn., who chairs the Senate Health, Education, Labor and Pensions Committee, did not respond to requests for comment.

Alexander has been leading talks with the ranking Democrat on the committee, Sen. Patty Murray, D-Wa., to find a bipartisan compromise to stabilize the individual insurance markets.

Thanks for reporting an error with the story, "Trump to end federal insurance subsidies for 13,000 Vermonters"