Editor's note: This commentary is by Dean Whitlock, of Thetford, a freelance writer who has been researching the issues surrounding marijuana legalization for years. A former supporter of legalization, he is now opposed. He is a member of Smart Approaches to Marijuana (SAM-VT)

[T]he discussions of H.170, which would legalize possession and home-growing of small quantities of marijuana, have focused a lot on the danger to teenagers, which is appropriate since adolescents are in a stage of neural development that makes them much more likely to become addicted, develop mental health conditions, and suffer decreases in cognitive processing and memory retention. The problem with this focus is that people over 21, particularly up to the age of 25 or 26, are still susceptible to all of these effects, just at a lower level of risk.

That point aside, the area where every age runs the same risk is on the highway. Again, teens and young adults are more at risk because they tend to take more risks in the first place. They are also less experienced with driving and with the use of alcohol and drugs. But adults do make the same stupid mistake of driving under the influence.

According to the best data we have available, drinking alcohol before driving increases the risk of accident five-fold at the still-legal .08 blood level. Driving under the influence of marijuana doubles your risk. That being the case, we would expect to find considerably more people dying on the roads because of alcohol then because of marijuana. The data on traffic accident fatalities that we have from the Vermont Department of Safety tell a somewhat different story: 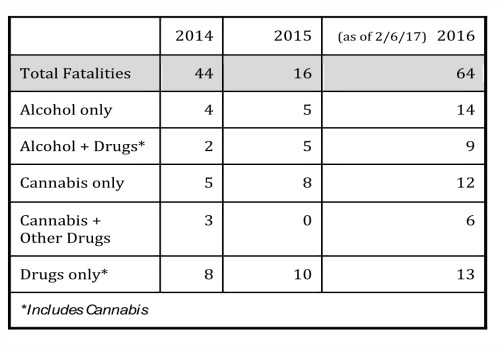 This data is based on blood tests that measure active THC, so we can be reasonably sure that the drivers had used marijuana recently enough to still be DUI.

Note the small difference between the number of deaths due to alcohol and the number due to marijuana. The most likely reason for this is that many marijuana users think it’s OK to drive after using. For teenagers, we have clear evidence for that from our Youth Risk Behavior Survey. Here’s the 2015 data:

Reports from both Colorado and Washington indicate that the same must be happening there. While accidents and fatalities involving drunk drivers went down in recent years, the numbers involving marijuana went up.

Why is this happening? Because we are not teaching people – young or old – that marijuana impairs your ability to drive. At a well-attended forum on marijuana effects held in Burlington last month, one attendee stood up and insisted that marijuana helps people drive more carefully, and this message pervades the popular websites that cater to people interested in learning more about marijuana from sources “untainted” by officials like police officers and scientists.

It’s important to note that the traffic fatality data shown above only includes deaths in accidents. It does not include the five Harwood teenagers killed on I-89 last October. The driver of the car that hit theirs, Steve Bourgoin (36, hardly a teen), has been charged with second-degree murder, so their deaths are not considered to be due to a traffic accident.

Addiction is not a crime, it is a mental health issue, and the behavior of users who suffer acute or chronic psychotic episodes goes far beyond the usual definition of addiction.

When Bourgoin’s blood toxicology report was completed, authorities withheld the contents pending trial; however, Vermont investigative reporter Mike Donoghue, writing for Vermont News First, quoted several sources in saying that there was active THC in Bourgoin’s blood at the time of the accident. Since then, Vermont Rep. Ben Joseph, D-Grand Isle-Chittenden, a retired judge, has reported being told the same thing by contacts of his in the state legal apparatus.

As reported on VTDigger, Bourgoin told friends that he suffered from anxiety and PTSD due to childhood trauma, and his former girlfriend told detectives that he self-treated with marijuana for “mood spells.” Court documents quote her saying, “It was always very evident when he was out [of marijuana], as he would be more angry and violent during those times.”

Anger is one of marijuana’s withdrawal symptoms, and it is a more addictive drug than most people think. A review of several studies of treatment methods for marijuana addiction found that one-year abstinence rates for adults, even under the most effective treatments, ranged only from 19 to 29 percent.

In a 20-year study involving more than 2000 U.S. war veterans being treated for PTSD, the vets who used medical marijuana along with the standard therapy reported more violent behaviors and worse outcomes after treatment than vets who didn’t use marijuana. The heaviest users showed the strongest effects. Another study found that marijuana use resulted in increased suicidal ideation among marijuana users.

There are other correlations between marijuana and serious mental health problems. Since 2002, a series of studies in Europe have reported that individuals who use cannabis have a greater risk of developing psychotic symptoms. Not only does marijuana bring on symptoms earlier and make them worse, it is a causative factor.

A Finnish study published this past November compared sets of twins where one used marijuana heavily and the other did not. Heavy use increased the risk of developing psychosis by a factor of 3.5. Again, the data indicated that, in many cases, marijuana abuse caused the psychosis, not the other way around. The newly released report on marijuana from the U.S. National Academies of Sciences agrees with these findings.

Addiction is not a crime, it is a mental health issue, and the behavior of users who suffer acute or chronic psychotic episodes goes far beyond the usual definition of addiction. These sufferers needs effective treatment far more than jail time. And these new research findings, combined with Vermont’s recent traffic fatality data, highlight the fact that marijuana is not harmless. Legalizing recreational marijuana in Vermont would not be a simple matter.

Vermont has already decriminalized marijuana use. What we haven’t done is provide a mental health system that can deal with the thousands of cases of addiction, psychosis, and other mental illnesses that we already have in our state, nor have we done nearly enough to educate Vermonters about marijuana’s harms, in order to prevent tragedies from happening.

Legalizing marijuana – whether like alcohol or tobacco – will only make our mental health burden worse, while it makes our highways far less safe.

Thanks for reporting an error with the story, "Dean Whitlock: Legalized marijuana imperils highway safety, increases..."