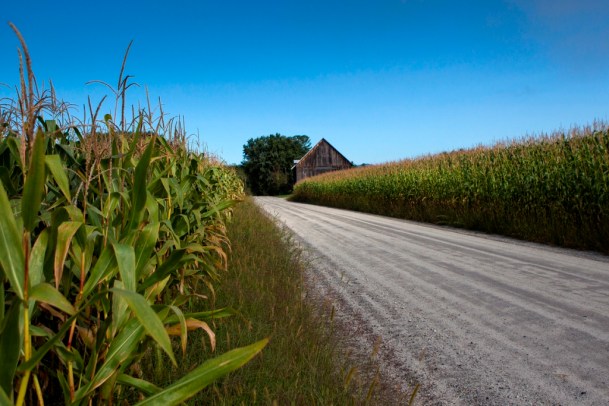 A cornfield in Vermont. File photo by Roger Crowley/VTDigger

Over the next three months corn farmers around the state will begin applying one of the most common soil and surface-water contaminants in the United States, the herbicide atrazine, and environmental advocates say it will cause serious harm to Vermont’s aquatic life.

Researchers believe this chemical caused or contributed to Missisquoi Bay’s intersex smallmouth bass. More than half the male fish in Missisquoi Bay bear eggs, and atrazine is known to cause abnormal feminization of various animals.

A recent study prepared for the Lake Champlain Basin Program found atrazine levels in streams feeding Missisquoi Bay and St. Albans Bay that are high enough to be toxic to plant life, but officials at the Agency of Agriculture, Food and Markets say they’re not worried. 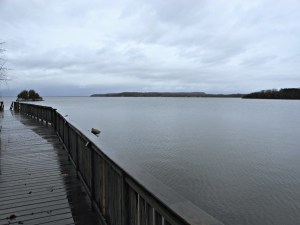 Atrazine will be applied to cornfields around the state through June, but it’s found in Vermont streams only when storms cause rainwater runoff from fields where it’s been applied, said Cary Giguere, the agency’s agrichemical program manager. The agency doesn’t monitor atrazine levels on days between rainstorms, Giguere said, but previous monitoring has shown that concentrations of the chemical decrease dramatically once the rain stops, often to the point of being undetectable.

Atrazine was observed in Jewett Brook, which drains into St. Albans Bay, at levels many times what the Environmental Protection Agency says is toxic to plants.

The study found levels of up to 26 parts per billion in 2015, according to the report.

In the worst-case scenario, Giguere said, this means some duckweed and algae might die off. But there’s already far too much algae in St. Albans Bay and Missisquoi Bay, where the atrazine levels are the highest, he said. Blue-green algae blooms that occur annually in these areas are primarily because of phosphorus in fertilizer farmers use that runs off into nearby surface waters.

In other words, Giguere said of atrazine: “It’s not a concern yet.”

However, it should be, said James Ehlers, executive director of the advocacy group Lake Champlain International.

Giguere is right that atrazine will kill off algae and duckweed, Ehlers said, but he’s wrong to think that shouldn’t be a concern.

“His remarks are everything that’s wrong with the Agency of Agriculture’s attitude toward the natural world,” Ehlers said.

“Blue-green algae is not algae, it’s bacteria,” Ehlers said. But green algae, he said, is a key component of Vermont’s aquatic ecosystems.

Several scientists contacted for this story said they couldn’t provide any definite conclusions on the effects of atrazine upon blue-green algae, or cyanobacteria. A 2006 study from the University of Nebraska found that, as previous studies had found, “green algae appear very sensitive to atrazine, while cyanobacteria and diatoms appear more tolerant.”

“The Agency of Ag continues to flash their ignorance and wear it as if it’s a badge of honor,” Ehlers said. “That the Agency of Agriculture would be unaware of the distinction (between cyanobacteria and algae) is extremely unsettling.”

It’s not trivial, either, that atrazine is found in Jewett Brook at levels five times what’s needed to kill off plants like duckweed, Ehlers said. 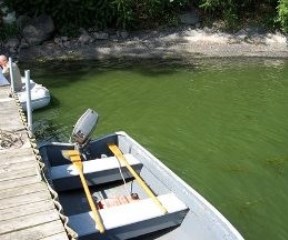 Duckweed is a plant commonly found in slow-moving water and in wetlands. Both duckweed and green algae are effective enough at removing phosphorus and other contaminants from water that they’re used to treat sewage. Phosphorus is the key pollutant in Lake Champlain that drives toxic blue-green algae — or cyanobacteria — blooms.

A further concern with the herbicide has to do with when its concentrations are highest in Vermont waterways, Ehlers said. Atrazine is applied when many fish and amphibian species are hatching, Ehlers said, and are most susceptible to developing intersex traits.

Giguere has said atrazine is not associated with the fact that 60 percent of Missisquoi Bay’s male smallmouth bass bear female sex characteristics.

Giguere said atrazine is among the most highly regulated substances in Vermont. A license is required to buy atrazine, he said, and four Agency of Agriculture staffers monitor farmers and applicators to ensure this and other pesticides are used according to manufacturers’ instructions.

But the Lake Champlain Basin Program report, written by Giguere’s former employee, retired Agency of Agriculture chemist Nat Shambaugh, states that there are no regulatory limits governing what concentrations of atrazine and other pesticides are allowed in surface waters.

Atrazine is banned in Europe, he said. And just because farmers in the United States use the chemical according to the manufacturers’ instructions, he said, that doesn’t mean atrazine isn’t reaching unsafe levels in Vermont waterways.

“Whatever the labels are saying is not stringent enough to protect atrazine from getting out into the environment,” Groveman said. “From our perspective, this is a dangerous poison that’s not being controlled sufficiently.”

“We’re working on another request, or maybe a petition,” Groveman said.

Thanks for reporting an error with the story, "Alarms raised about herbicide runoff as planting season nears"