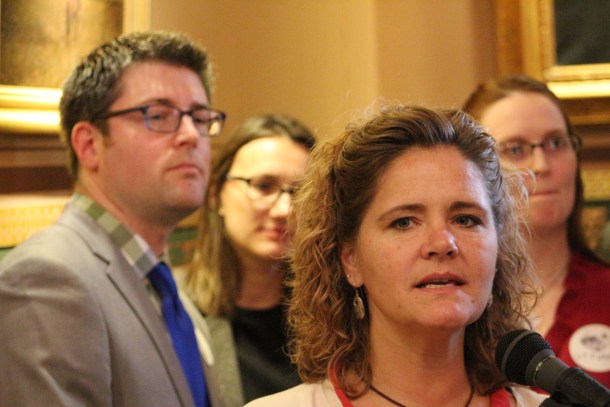 [A] tripartisan group of lawmakers is backing a bill that would create a state-administered paid family and medical leave program for workers in Vermont.

The bill, which is currently being processed, would mandate that all employers and workers split a 0.93 percent payroll tax. The money would go to the Department of Labor, which would administer a paid family and medical leave fund, similar to the way it administers the unemployment insurance fund.

Workers meeting certain criteria to qualify for leave benefits would be able to take 12 weeks off from work to give birth or take care of a newborn or ill family member, among other things. The workers would make the same amount they usually do, paid from the state-administered fund.

“Anyone who knows me knows that I shouldn’t be standing here at this podium, because this is not the type of bill that I would typically support,” Trieber said at a news conference. He considers himself a moderate. 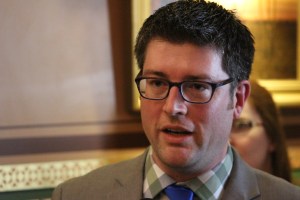 Rep. Matthew Trieber, D-Bellows Falls, is the lead sponsor of the bill. Photo by Erin Mansfield/VTDigger

“I represent a community right on the New Hampshire border. I do most of my shopping downtown, and what I consistently hear is, ‘We like to treat our employees like family, but leave us alone, or at least make that easier for us.’

“This bill does that. I’m excited to get behind a bill that allows state resources to be directed to make it easier for businesses to offer their employees, their family, a benefit that they would not otherwise be able to offer.”

Gov. Phil Scott, who ran a campaign on making Vermont more affordable, has opposed adding mandates that cost businesses money. He said at a news conference Thursday he would veto the bill “if it’s going to raise taxes and fees.”

“I don’t think much of (the proposal), to be honest with you,” he said. “I’ve said that we’re not going to raise taxes and fees.”

Others said the measure would be good for workers and businesses alike.

Copeland Hanzas, a small business owner who backed paid sick leave, pointed to her sister’s experience with coming back to work after giving birth. Because the sister could not afford to give up her paycheck, she took her 5-week-old son to work with her, Copeland Hanzas said.

“I don’t have young kids anymore, but I can contemplate what it means to have aging parents, and we need to be very mindful that there are so many Vermonters who are caring for their aging parents,” Copeland Hanzas said.

“When you have an employee who’s going through a very profound experience, you want to be able to support that person in moving through that life change, and you don’t want them to have to be stressed about work at a time that they should be concentrating on family,” she added. 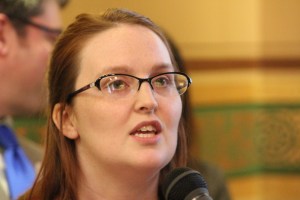 Tara Hodgkins, a Vermonter who described herself as a conservative, speaks in favor of paid family and medical leave. Photo by Erin Mansfield/VTDigger

Tara Hodgkins, a Vermont resident who called herself a conservative, said she fully supports the proposal. Hodgkins said she is the sole breadwinner in her household, with two children and a husband who has health conditions. However, the federal Family and Medical Leave Act — which grants unpaid time off — does not apply to her because she works for a small employer.

“If you look at the numbers, (my daughter) was born 52 weeks ago, and I went back to work 50 weeks ago,” Hodgkins said. “I took a combined 23 days off work for her birth and my son’s birth, and I would like to point out, too, that I was left with no time off for either of those years.”

She called paid family leave “a human issue,” not a political issue. “We need the time to care for ourselves, our children, our families, our aging parents. It doesn’t matter if we’re Democrat, Republican, anything. We’re just people at that point.”

Trieber said the payroll tax on someone making $18 an hour would be $348 a year, split evenly between the worker and the employer. He said, as a worse case scenario, the worker and employer would each pay about $500 a year if the worker made $100,000.

Cary Brown, the executive director of the Vermont Commission on Women, said the program would save parents money. She said they would collectively spend between $2 million and $3.4 million less on child care every year.

Thanks for reporting an error with the story, "Tripartisan group introduces paid family leave bill"