[G]ov. Phil Scott will consolidate three areas of state government, according to a memo issued on Jan. 13.

The Scott administration will merge the departments of liquor and lottery under one Liquor and Lottery Commission; restructure IT programs under an Agency of Digital Services; and create a new Agency of Economic Opportunity that combines the Department of Labor with the agency of commerce and community development.

Rebecca Kelley, Scott's communications director, said by email that the governor will hold a press conference on Tuesday to explain how the new programs and departments will work. "Aligning and integrating these agencies and departments will strengthen state government’s ability to deliver on key objectives, including rebuilding Vermont’s private-sector workforce, and modernizing government to provide more efficient and effective service to Vermonters," Kelley said.

The governor will sign executive orders on Tuesday detailing the changes, which are part of a push to modernize state government.

In the memo, Suzanne Young, the secretary of the Agency of Administration, says the realignment of programmatic services will “help state government to better meet the strategic goals and outcomes established by the governor.”

In addition, Young emphasizes that “no employee’s job will be at risk” as a result of the changes.

The governor hopes to strengthen the “organizational focus” and improve the effectiveness of IT programs, the commerce agency and the liquor and lottery departments.

“This is an exciting opportunity to rethink how state government provides services,” Young wrote.

The change at the Department of Liquor Control is not unexpected. Michael Hogan, the retired commissioner, brought new scrutiny to the department in 2015 when it was discovered that over a 14 and a half period he had allowed the director of enforcement to log in overtime hours for work not performed. The scandal, reported by the Burlington Free Press, led to discussion in the Legislature about eliminating the department.

Jason Gibbs told reporters Friday at a press conference that the governor would absorb the tourism department and consolidate it with other commerce functions with the Agency of Commerce and Community Development. In addition, all marketing functions across state government will be merged into a new department at the agency.

“We are evaluating the vertical integration of marketing elements of state government,” Gibbs said.

Currently marketing programs are scattered across agencies. Under Scott’s plan, marketing would come out of one department under the agency of commerce.

The commissioner of the Department of Tourism and Marketing position has been held vacant.

In all, Scott had 464 exempt positions to fill. There are 100 slots left to hire for, Gibbs said, most of which are lawyers and principal assistants.

This story was updated on Jan. 16. 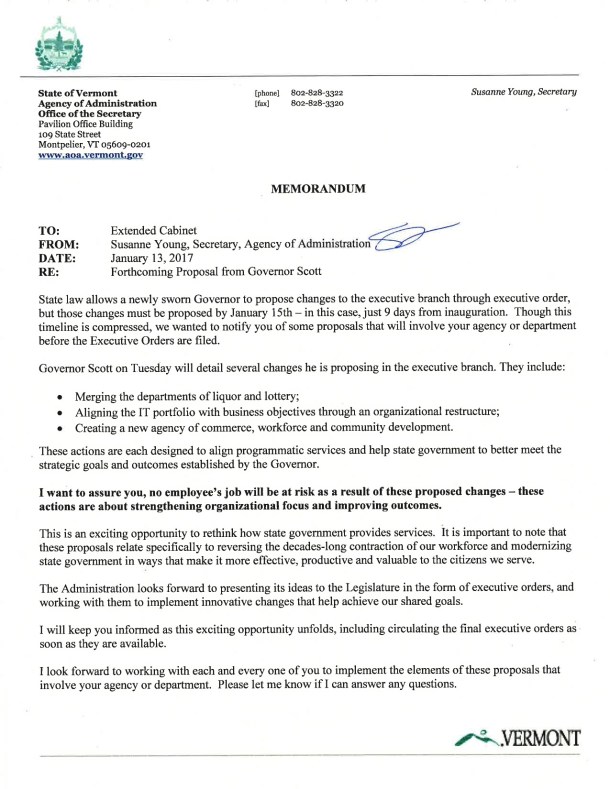 Thanks for reporting an error with the story, "Scott to announce government restructuring plan"