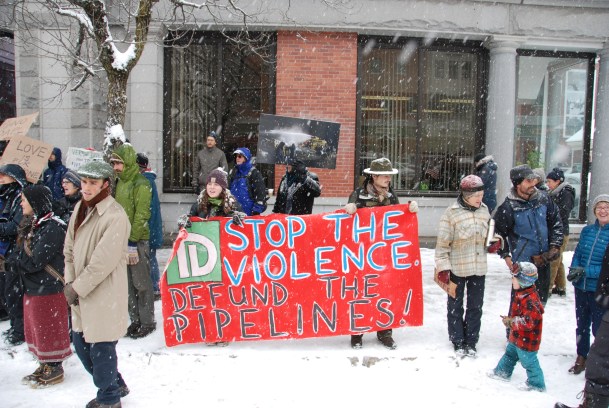 Protesters outside the TD Bank in Montpelier. VTDigger Photo by Jasper Craven.

MONTPELIER — The day after the U.S. Army Corp of Engineers denied a key construction permit for the Dakota Access Pipeline, roughly 100 protesters gathered at two TD Bank locations on Main Street to demand the national bank halt its financial relationship with the energy company building the controversial pipeline.

The Vermont protests — which were organized by three community groups as part of a national call to action — also demanded the state of Vermont cut ties with TD Bank, which is the state’s bank of record. One of the bank locations was closed by the protests. The other didn’t open because of bad weather. Eight arrests were made. Traffic was unaffected.

“Not many Vermonters know, but the state treasurer has put $193 million of our taxpayer dollars into TD Bank, and TD Bank has invested in the pipeline” said Catherine Cadden, a protest organizer from Jeffersonville. “I don’t think any Vermonter that I know is going to want to have any investment that funds genocide, funds human rights violations and indigenous rights violations.”

In a Monday statement, the Treasurer’s Office said the state entered into a banking services contract with TD Bank in 2010 after fielding proposals, and that the state is currently reviewing banking options as the 2010 contract will soon expire.

“We are currently conducting a competitive bid process for banking services and are therefore limited in information we can provide at this time,” the statement reads. “When that process is completed and a contract has been awarded and fully executed, Treasurer Pearce will be happy to sit down with interested parties to discuss the decision-making process.”

As snowflakes fell to the ground, protesters chanted “I stand with the future of this land” and held homemade signs with messages, including “People over Pipelines.” A hot community lunch of pasta was given to the congregation, who remained peaceful.

Standing Rock Sioux Tribal Member Beverly Little Thunder, a Vermont resident, smoked a peace pipe on Main Street as she spoke of the incredible solidarity between Vermont and tribal elders in North Dakota.

“I want us to remember all of those who are in Standing Rock right now,” Little Thunder said. “It’s so fitting that we stand here with snowflakes falling on the pipe, because that is the way our people are praying in Standing Rock.”

Anti-pipeline protests in North Dakota have been percolating for months, and were spearheaded by the Standing Rock Sioux Tribe, whose land was in the proposed pipeline path. Roughly 70 Vermonters traveled to the site in November, many of whom were carpenters and tradespeople who helped winterize shelters.

U.S. Sen. Bernie Sanders has been urging President Barack Obama to designate the Standing Rock Sioux land as a federal monument for weeks, and he attended a pipeline protest outside the White House in November.

“We are not going silently into the night,” Sanders said during the Nov. 16 protest. “The stakes are too high for the future of this planet. We are going to be smart. We’re going to educate. We’re going to organize.”

Sunday’s decision by the U.S. Army Corp of Engineers denied a crucial permit sought by the company to drill beneath the Missouri River — a federal waterway. The agency also ordered a comprehensive environmental impact study on the proposed pipeline path, which could take years to complete.

But while the Army’s decision to block the permit was seen as a huge victory for the Standing Rock Sioux, President-elect Donald Trump could overturn the federal government’s recent decision. In recent days, Trump has suggested that he supports the original route, which cuts through tribal land. (Trump used to own stock in the Dakota Access parent company, Energy Transfer Partners, but dropped it last summer, according to the Washington Post.) 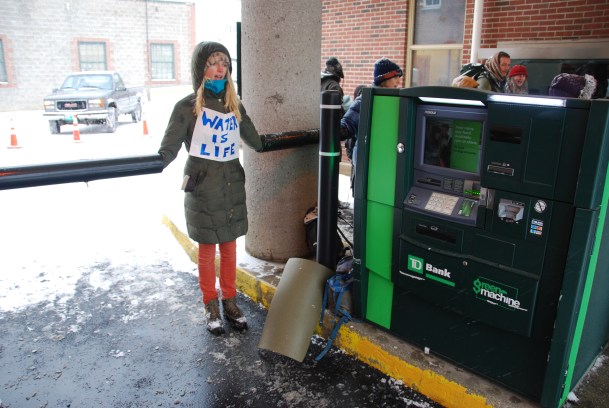 A protester outside TD Bank in Montpelier. VTDigger Photo by Jasper Craven.

Vermont organizer Cadden — who spent much of October and November at the Dakota protest site — said the pressure will not let up once Trump enters office.

“This is a victory, but we will keep our boots on,” Cadden said. “No one is going anywhere at Standing Rock, they are going to stay through the winter. We do have a new president coming in in January, so the fight continues.”

A group formed a human chain to block off the drive-up ATM on the corner of Main and School Streets, while others rallied outside the larger Main Street location.

Police officers from various departments overlooked the protests, including the Vermont State Police and Montpelier Police.

Montpelier Police Chief Tony Facos — who met with protesters at the Christ Church shortly before 9 a.m. — said eight people who entered the bank were arrested and charged with unlawful trespassing.

Judith Schmidt, head of Corporate Media Relations at TD Bank, said: “We support efforts to ensure the sustainability and safety of the Dakota Access Pipeline (DAPL) site. And we respect the rights of those who wish to voice their opinions in peaceful protest.”

Hugh Hawkins, a service worker at the Capitol City car dealership in Berlin, said that he was frustrated that protesters had made it impossible for him to deposit money in the dealership’s TD Bank account.

Thanks for reporting an error with the story, "Eight arrested as protesters pressure TD Bank"

Beth Leduc: How our son became one of about 70 diagnosed cases worldwide