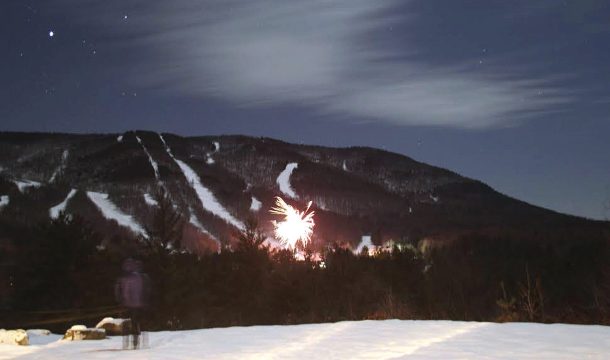 Magic Mountain in Londonderry is known for its challenging terrain. After years of inconsistent business, new investors plan to revive it with new snowmaking technology, repaired chair lifts and more. Provided photo

(This story is by Makayla McGeeney, of the Bennington Banner, in which it was first published.)

[L]ONDONDERRY — It’s been an uphill climb, but now it’s all downhill.

With the sale of Magic Mountain Ski Area completed last week, it is scheduled to open Dec. 17 after being unoccupied since March.

A group of 16 investors, friends who grew up skiing together on Magic and around southern Vermont, make up Ski Magic LLC. The group made an offer to Magic Mountain Management in April. The sale was postponed several times but closed Nov. 21, according to a news release.

Ski Magic President Geoff Hatheway is working on repairing the ski lifts, doubling the amount of snowmaking and become a more consistent business. Referring to that last goal, he said inconsistency has made people think the mountain has been closed over the last few years.

“People don’t even know that Magic has made snow in the past. Well, it does,” he said. “It has for many years, but it’s just been very inconsistent because of operating budgets or lack of investment in terms of how many trails you can cover.”

Investing in the pump house, utilizing the latest snow gun technology for greater efficiency and repairing pipes that were laid in the 1980s are top priorities. The chair lifts have been undergoing repair to be up to code. There are two bottom-to-summit lifts — the red one with two-person chairs and the black one with three-person chairs — and two surface lifts for the tubing park.

Hatheway hopes to improve the area for beginner skiers by extending the tow handle. The terrain park will be expanded and a conveyor lift may be added next year.

He said he’s gotten to know the mountain’s operations from the inside over the last few years by serving as the former marketing director.

In Hatheway’s five-year business plan, he said he hopes to build the skier base from 20,000 visitors per year to 36,000 by accommodating 1 percent of southern Vermont’s market — roughly 1.7 million visits in a good year.

“If we’re at that level, the mountain isn’t crowded still, so the ski experience is still what we want it to be,” he said. “Nice open trails, freedom, you’re not worried about running into another skier. But yet, provides the revenue for us to be profitable on a very consistent basis. We’re able to either put more money back into the mountain for further improvements down the road or return money back to the investors. We’re going to run this like a business, but one with a very special character.”

About 50 percent of Magic’s employees will return after being laid off in the spring, and the others are new — consisting of community members or folks from southern Vermont, Hatheway said.

“People know that Magic has an unbelievable terrain area. If we can prove that we can be consistently open earlier, with more snowmaking on more trails, great grooming, combined with the raw terrain and the glades that we have and the steepness that we have, it really creates a special, unique place to visit,” he said.

The purchase agreement included a provision that the previous owners perform repair work during the due diligence phase, which included work on the 5,000-foot-long black triple chair. It had not been operated for the last two years due to insufficient money, Hatheway said.

Magic Mountain, spanning about 700 acres, was founded by Swiss ski instructor Hans Thorner in 1960. It formed the “Golden Triangle” in the 1960s and 1970s along with Stratton and Bromley mountains. Magic was bought by Bromley in the 1980s, later shut down by the real estate market downtown, and then re-emerged circa 1997.

Thanks for reporting an error with the story, "With sale complete, Magic Mountain comes back to life"