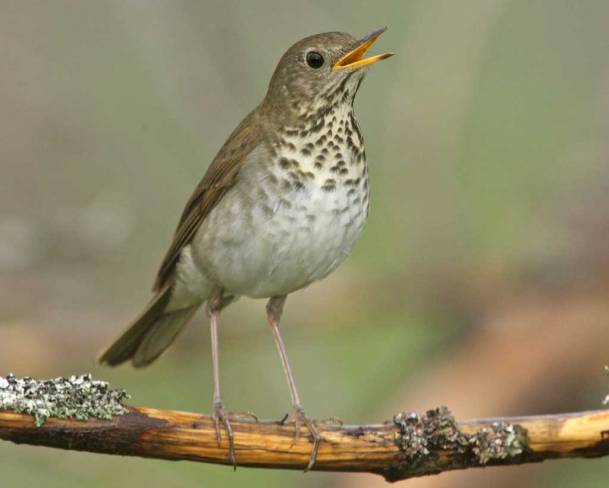 [W]INDHAM – A national bird-protection organization says the proposed Stiles Brook Wind Project “poses an unacceptably high risk” to some species, including a rare thrush that has been considered for endangered species status.

In an Oct. 20 letter to the chairmen of the Windham and Grafton selectboards, the American Bird Conservancy argues that the planned construction of 24 turbines in the 5,000-acre forest “is a potential threat to migratory and resident birds and bats” that frequent the area.

If the project is built, the Virginia-based conservancy argues for independent monitoring of bird and bat fatalities. But it’s clear that the organization would rather there be no commercial turbines on the ridge in the first place.

“ABC questions whether the sacrifice of hundreds of thousands, if not millions, of our shared ecologically important birds and bats justifies building any large, commercial wind energy facility in areas with seasonally high concentrations of birds and bats, like (Stiles Brook),” wrote Michael Hutchins, director of the conservancy’s “Bird Smart Wind Energy Campaign.”

Iberdrola Renewables, which has spent years developing the Stiles Brook proposal, responded by saying it disagrees with the conservancy’s conclusion and has found no evidence of the rare thrush cited by Hutchins.

“The protection of wildlife and habitat is a fundamental concern when siting any of our wind farms,” Iberdrola spokesman Paul Copleman said. “We know that those who are truly concerned about protecting birds, bats and their habitat understand that numerous scientific studies have shown the No. 1 threat is indeed climate change, which well-sited wind farms like Stiles Brook can help mitigate.”

If constructed as currently planned, Stiles Brook would consist of 24 turbines – 16 in Windham and eight in Grafton. It would be the largest wind-power site in Vermont, both in terms of the number of turbines and the projected power output of 82.8 megawatts.

Iberdrola recently cut four turbines from the original Stiles Brook proposal and also increased its “community benefits” offer. That’s a package of taxes and other payments that could total a combined $1.5 million annually in the two towns.

But the changes haven’t slowed Stiles Brook opponents. Resident activists and some town officials have argued that the project could negatively affect property values, aesthetics, the environment and human health.

Iberdrola contends the critics are spreading false information. The company pitches the project as a strong source of renewable power and points out that it must undergo a rigorous state permitting review before construction could commence.

Until now, much of the environmental debate has centered on how the Stiles Brook development might impact flooding, erosion and water quality. There also has been talk of bear and moose habitat.

The American Bird Conservancy’s arguments relate solely to birds and bats. And the organization has stepped into the Stiles Brook debate only weeks before the two towns are scheduled to vote on the wind project.

Hutchins said he already had been looking at the Stiles Brook proposal as part of his recent attempt to identify the “10 worst-sited wind energy projects for birds.” Stiles Brook didn’t make that list, but Hutchins said he was intending to weigh in on the project at some point.

“In the meantime, I was contacted by opposition groups in the area and asked to get involved,” Hutchins said. “They informed me of the timeline for a (development) decision and, as a result, I responded earlier than originally planned.”

In his letter to the towns, Hutchins writes that the conservancy supports wind energy projects that are “done responsibly” and “sited appropriately.”

But Hutchins asserts that Stiles Brook “is a significant wildlife habitat. Vast numbers of migratory raptors move through this area, and it is an important breeding and foraging area for migratory songbirds, including species of conservation concern.”

One species cited specifically is Bicknell’s thrush. “This species is rare and declining, and losses due to the poorly sited Stiles Brook Wind Energy Project would contribute to that decline,” Hutchins wrote.

The U.S. Fish and Wildlife Service has labeled Bicknell’s thrush “one of the rarest birds in North America” and one that is “extremely vulnerable” due to specialized habitat in high-altitude spruce-fir forests.

A major threat to the bird’s survival, federal officials say, is habitat loss due to climate change as well as forestry, farming, energy and recreational development. The Center for Biological Diversity has asked that Bicknell’s thrush be listed as an endangered species, but that has not yet happened.

Habitat loss isn’t the only issue that concerns the American Bird Conservancy. There’s also the risk of bird collisions with windmills.

“In the United States, the second leading wind power producer in the world, this risk can be substantial, with hundreds of thousands of birds and bats being killed annually, at minimum, through collisions with the fast-moving turbine blades,” Hutchins wrote.

The issue of turbine bird kills is controversial. The Vermont Public Interest Research Group, which supports wind energy development, argued in a recent wind power fact sheet that fossil fuels are “responsible for a far higher number of bird fatalities than wind turbines.”

VPIRG also asserts that “the biggest enemies of birds continue to be cats and buildings.”

Copleman said Iberdrola’s initial evaluation of the Stiles Brook property has shown no potential bird impacts like those raised by the American Bird Conservancy. And the company has no evidence that Bicknell’s thrush exists on the site.

“Our avian and wildlife experts, with guidance from various state agencies, have evaluated the site and disagree with the letter,” Copleman said. “We look forward to presenting the facts to the (state Public Service Board) for their independent assessment, following an affirmative decision from the registered voters of Grafton and Windham on Nov. 8th.”

Hutchins cites reports and studies for his general conclusions and concerns about turbine development and bird habitat. But he acknowledged on Friday that he has not specifically studied or visited Stiles Brook.

“There are so many poorly sited wind energy projects currently under development, I cannot visit every one of them,” he said.

Thanks for reporting an error with the story, "Bird advocates concerned about Stiles Brook proposal"