Under state law, coordination between a political action committee —like the one funded by the RGA — and a candidate’s campaign in producing and placing advertisements is prohibited.

In this case, the Vermont Democratic Party alleges the ads by the PAC — called A Stronger Vermont — were not done independently of the Scott campaign. Campaign finance laws do not allow expenditures by a PAC that are “intentionally facilitated by, solicited by, or approved by the candidate or the candidate’s committee.”

The standard for improper coordination, according to state law, requires “knowledge of the fact, or willful blindness toward the fact that the action will be used in connection with an activity or expenditure on the candidate’s behalf.”

Attorney General William Sorrell said Tuesday that his staff would look at the ads in the next day or so and do some research before deciding whether to go forward with a formal investigation.

“For us to launch a real investigation, we have to have reason to believe that there has been a violation,” Sorrell said. “It’s not just simple speculation. It’s a serious thing for us to launch an investigation. So we’ve got to see what sort of flesh is on the bones.”

In the complaint, party Executive Director Conor Casey alleges the close-up shots of Scott in the ads indicate the lieutenant governor must have been aware of the RGA crew. The ads also feature crisp audio of Scott speaking.

“The nature of the footage — up close shots of Mr. Scott — strongly suggests that the cameraman was allowed to remain in close proximity to Mr. Scott in order to obtain better quality images,” Casey wrote.

A photo on Scott’s Facebook page shows a cameraman filming a campaign event that was featured in one of the RGA ads. A separate video on Scott’s Facebook page shows another cameraman closely filming the lieutenant governor and his supporters pulling a tractor-trailer in Barre. The ads include images from the locations where the cameramen are seen. 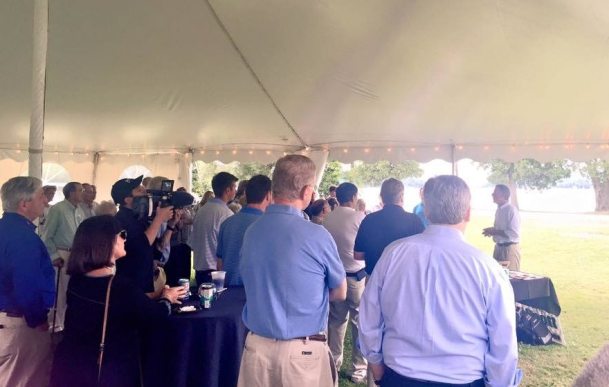 This photo on Phil Scott’s Facebook page shows a cameraman, at left in a baseball cap, filming a campaign event.

Most of the footage in the RGA ads appears to have been filmed on the last weekend of July. The events featured in the spots include the Barre Truck Pull on July 30, a meet-and-greet at Maria’s Bagels in Barre on July 30 and an event on Lake Bomoseen on July 31.

Brittney Wilson, Scott’s campaign spokeswoman, said there had been no coordination at all with the RGA.

“This is absurd, clearly a distraction,” Wilson said.

“All of our events we post on our website, and those are open to our supporters, and a lot of time we even see our opposition show up at our events and film Phil,” she said. “It’s not hard to figure out where Phil is going to be.”

Allegations of coordination between national PACs and local campaigns are not new to Vermont.

After the 2010 election, the attorney general’s office sued the RGA and Brian Dubie, alleging improper coordination between Dubie’s gubernatorial campaign and the governors association. Specifically, the state alleged Dubie shared confidential poll results with the RGA, which then used that information to tailor advertisements backing Dubie. In the end, $90,000 in penalties were levied on Dubie and the RGA.

Wilson said the Scott campaign would never risk coordination when Vermont’s state laws are so strict and large penalties are possible.

Wilson said that if any coordination should be investigated, it was between the Democratic Governors Association and gubernatorial candidate Sue Minter. Wilson pointed to recent reporting from Seven Days showing that Minter’s new communications director, Elliot Bent, was interviewed by DGA spokesman Jared Leopold in the hiring process.

“That seems like pretty close coordination to me,” Wilson said.

Leopold disagreed and pointed the finger back at Scott.

Leopold said that because he is not involved with a DGA-related PAC, and instead works for the main wing of the organization, he is allowed to advise campaigns around the country and routinely does so.

“It’s disturbing that Phil Scott and his national Republican backers don’t understand Vermont campaign finance laws that ban coordination with independent expenditure committees,” Leopold said in a statement. “Phil Scott has serious questions to answer about whether he illegally coordinated with an independent expenditure group that spent more than $500,000 to prop up his campaign with TV ads.”

Thanks for reporting an error with the story, "State Democrats see cameraman as sign of GOP lawbreaking"