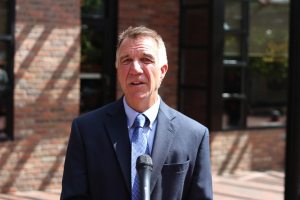 [B]URLINGTON—Lt. Gov. Phil Scott says he would abandon the state’s health care exchange and lobby the federal government to allow Vermont businesses to buy insurance across state lines if he becomes governor.

Those were two aspects of the health care reform plan he announced at the top of Church Street, where he said that under the last six years of Democratic Party leadership in Montpelier, health care costs have increased by “well over 20 percent.”

The plan includes many of Scott’s positions from the primary campaign—that the state abandon Vermont Health Connect in favor of either the federal exchange or a multi-state exchange, and that the administrative costs of Medicaid are too high.

Scott said he said he does not trust promises by Gov. Peter Shumlin’s administration that the exchange has been fixed.

The Republican nominee for governor also said he would eliminate the mandate that small businesses buy insurance through Vermont Health Connect, be honest about the scope of problems with the exchange, fully implement Vermont’s health care cost transparency law, and encourage seniors to use home health care instead of nursing homes.

“One of the many reasons that Vermont is unaffordable for so many Vermonters is because of the cost of health care,” Scott said. He and his Republican colleagues have been running on a platform centered on making Vermont more affordable and growing the economy.

“Politicians have been promising quick fixes for far too long,” Scott said. “The reality is we are not going to be able to fix the problem on day one. It’s going to take focus and discipline to get health care reform back on track.”

“Reform is an ongoing process, but the discussion lately has been focused on finding new ways to pay for it while the underlying problem exists,” he said. “The costs are increasing faster than Vermont’s ability to pay for it. What benefit are we providing people if we require them to pay for health care that they cannot afford?”

Democratic opponent Sue Minter has not outlined her health care plan for the general election. During the primary, she called the proposed all-payer model a matter of “when,” endorsed the idea of expanding Dr. Dynasaur to all Vermonters up to age 26, and said she was reluctant to move to the federal health insurance exchange.

Randy Brock, the former state senator and auditor who is running for lieutenant governor, joined Scott at the news conference. He called for “rational, evidence-based health care reform” and said Vermont has among the highest health insurance premiums in the nation.

“We’re strangled by regulation and mandates that put red tape, not patients and providers in charge,” Brock said. “We’re mired in political discussions about how to pay for health care, when we need to be focused on how to reduce the cost of health care.”

Scott said he supports paying doctors based on the quality of their care, a practice called value-based payments that is the latest effort in health care reform. But he said he knows very little about the proposed all-payer model that the Green Mountain Care Board and the Shumlin administration are negotiating with the federal government.

“If it controls cost, lowers cost for Vermonters, obviously I’d be interested, but we have to see the details there in the plan, and the devil is in the details,” Scott said. “I don’t think that any of us fully understand it, and trying to get the details has been a bit difficult.”

He said he is sure that Green Mountain Care Board has been transparent in the process of setting up the all-payer model, but he said he and other Vermonters may not have been paying enough attention.

​Correction: A previous version of this story said Dr. Dynasaur 2.0 would cover people up to age 27. ​

Thanks for reporting an error with the story, "Scott outlines health insurance changes"