[W]hen Burlington College shut its doors in May, students who were looking to transfer to other colleges had difficulty obtaining transcripts.

Last month, the State Board of Education gave the Agency of Education permission to temporarily house the student records. On Tuesday, the board allowed the agency to use up to $18,000 in state funds to organize and store Burlington College records.

Sandy Baird, an attorney and longtime faculty member at Burlington College, told members of the state board that she is “dismayed” by the situation.

“Students have been contacting me all summer, and I have virtually nothing to tell them,” Baird said. “It has been a total disaster for our students and for the faculty. And now the taxpayers for the state of Vermont have to pick up the tab for this — it is simply unconscionable.”

Bill Talbott, the deputy secretary of the agency, says the transcripts are a “mess.” Two staff members have been working full time to organize the records, Talbott said. 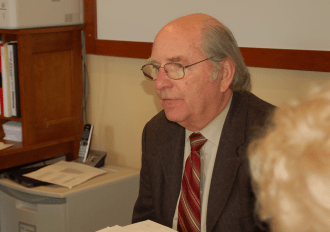 The college had recently moved to electronic transcripts and hired Campus Cafe, a Massachusetts software and information management company that caters to small colleges, to process the information. Campus Cafe has not been paid since last February, according to Talbott.

“The problem we find ourselves in is that Campus Cafe is working with us but they want to get paid before they release anything to us,” Talbott said. While Campus Cafe isn’t looking for reimbursement for the winter months, in order for the agency to gain access to the student transcripts they need to set up a six-month account.

Talbott urged the board and secretary of education to ask the Legislature and the next governor to require private colleges to bond for record-keeping expenses — if and when a school suddenly has to shut down operations.

Clare O’Shaughnessy, the attorney for the agency, said that “taxpayers shouldn’t be the ones footing the bill for this.”

The money will come out of the agency’s general fund, but officials plan to discuss this with the administration and the Legislature since the unexpected costs were not part of the budget appropriated to the agency, according to Talbott.

Baird told the state board that students don’t know what to do or where to go for records. She had told them to go to the college website but then that was taken down as well.

“There has been no communication to the students,” Baird said.

AOE has set up an email for students to contact — [email protected] — but Talbott said it will be awhile before they have records organized and ready to send out.

“We will set up a special email address, but we can’t do request yet. Our goal is to get them acceptable to another institution so they can do that,” Talbott said.

The state agency is the temporary custodian of the student records, but it is up to the state board to find another college to take them on. “By law our jurisdiction ends with that. They were a private college,” Talbott said.

Baird said this won’t be the last time the state will have to bail out the college. “I don’t think it will just be $18,000 because I don’t think another school will pick up these [transcripts]. Burlington College has no money. It is going to be an unending drain on the state of Vermont.”

Thanks for reporting an error with the story, "State taxpayers to pick up tab for Burlington College student records"