[V]ERNON — Entergy has agreed to give the state $600,000 for Vermont Yankee emergency planning over the next two years, and officials say some of that money will be allocated to towns in the vicinity of the shut-down nuclear plant in Vernon.

The funding is part of a new contract between Entergy, the plant's owner, and the Vermont Division of Emergency Management and Homeland Security.

Due to changes in federal safety regulations at Vermont Yankee, Entergy's mandatory emergency planning payments to the state ended June 30. But Vermont officials had lobbied hard for some kind of continuing support from the company, and the agreement announced Wednesday fulfills that goal. 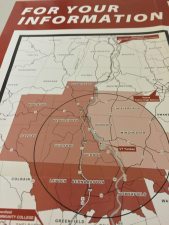 Vermont Yankee's 10-mile emergency planning zone has become a thing of the past. File photo by Mike Faher/VTDigger

“This is about doing what's right and what is best for the people of the former emergency planning zone towns,” said Erica Bornemann, Emergency Management and Homeland Security's chief of staff. “It makes it a whole lot easier on our budget to ensure that not only our folks are prepared at the state level, but (also) to provide some funding at the local level to continue their preparedness as it relates to Vermont Yankee.”

A Vermont Yankee representative noted that the company also has signed a new emergency planning agreement with Massachusetts. Entergy will pay $229,000 to the Massachusetts Emergency Management Agency over the next four years — an amount identical to a previous agreement with New Hampshire.

"Once again, we worked collaboratively with the state of Vermont and the commonwealth of Massachusetts and are pleased to have negotiated an agreement which covers emergency planning expenses in both Vermont and Massachusetts,” said Joe Lynch, the plant's senior external affairs manager, in a statement Wednesday. “Without the agreements, the states and towns would no longer receive emergency preparedness funding from Vermont Yankee.”

Entergy stopped power production at Vermont Yankee at the end of 2014. The company has received federal approval for regulatory changes including elimination — in April of this year — of the former 10-mile emergency planning zone around the facility.

The Nuclear Regulatory Commission cited the reduced risk of accident at the plant as justification for easing Entergy's obligations. Vermont officials had repeatedly voiced opposition to the change, in part due to the continued presence of radioactive spent nuclear fuel in a cooling pool.

Money played a big role in the debate. Entergy paid more than $1.9 million in fiscal year 2016 for the state's Radiological Emergency Response Program; that cash was spread around several state agencies and also to Vermont towns in the emergency planning zone — Brattleboro, Dummerston, Guilford, Halifax, Marlboro and Vernon.

Facing the loss of that cash, state officials initially had zeroed out the Radiological Emergency Response Program budget for the current fiscal year, which began July 1. Also, former emergency planning zone towns were told to expect no more funding from the program.

In a last-ditch effort to preserve some Vermont Yankee emergency zone operations, officials announced in May that new legislation had expanded the state's so-called bill back authority over Entergy. In other words, several state offices — including Emergency Management and Homeland Security — were directed to continue emergency activities and send Entergy a bill.

The contract announced Wednesday negates the need for that. In fact, the division has expressly agreed not to use its “bill back” authority over the life of the deal.

Instead, Entergy will pay the division $300,000 per fiscal year through June 2018 “for emergency management-related expenses,” with the understanding that the company and the state will “negotiate in good faith” for additional funding in later years.

“We really felt that working collaboratively with Vermont Yankee on a mutually agreed-upon (contract) was much more beneficial” than sending the company a bill, Bornemann said.

Some of that cash will end up in the former Vermont emergency planning zone towns, but Bornemann said state officials are “still working out the details as to what the exact dollar amount will be.”

Overall, the idea is to provide ongoing radiological emergency operations, albeit on a reduced scale in recognition of the fact that Vermont Yankee no longer produces power, Bornemann said.

State officials plan “to provide funding at the local level to continue to do a much lesser extent of activities, but to still have opportunities like exercises and training and planning workshops,” she said.

“Especially while fuel remains in the pool, we feel that it's prudent, out of an abundance of caution, to ensure that the personnel on the ground have the right training to deal with a pretty highly technical hazard,” she added.

The division also will maintain a staff presence in Brattleboro. “We're in the process now of posting a position that will still be stationed in Brattleboro,” Bornemann said. “It will be an all-hazards program coordinator, but one of their primary functions will still be to interact with the emergency planning zone towns and Vermont Yankee.”

The new agreement also grants the state remote access to the Vermont Yankee Plant Display System. That access will continue until all the plant's spent fuel has been transferred into more stable dry cask storage, a transition expected by the end of 2020.

Vermont Yankee spokesman Marty Cohn said access to that monitoring system “will provide the state of Vermont with real-time plant data during events and exercises.”

“We have had a collaborative relationship with them for years and years while the plant operated,” Bornemann said. “This agreement is really a testament to that.”

The new contract with Emergency Management and Homeland Security, however, does not preclude other state agencies from billing Entergy for Vermont Yankee-related activities. That includes the state Department of Health, which operates a water testing program that — until this fiscal year — had been funded by the plant's owner.

Also, the state Agency of Natural Resources is reserving the right to make Entergy pay up when officials see fit. “We do intend to use the (agency's) new authority to bill back the company for work related to decommissioning, ongoing monitoring, etc.,” said Trey Martin, the agency's deputy secretary.

Thanks for reporting an error with the story, "Entergy signs two-year deal to pay for emergency planning"