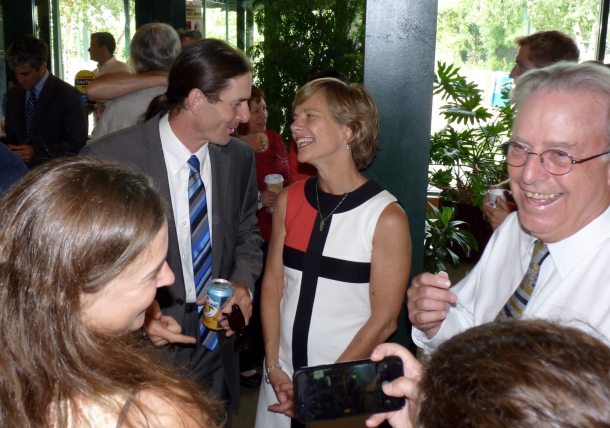 Former Transportation Secretary Sue Minter and Chittenden County Sen. David Zuckerman celebrated their nominations for governor and lieutenant governor and gained the support of their opponents who attended the Burlington event.

While Matt Dunne, who came in second, embraced Minter’s candidacy, the third-place finisher, Peter Galbraith, did not attend and has refused so far to endorse Minter in the general election because of his disgust with what he called last-minute “rotten and sneaky” campaign buys from independent sources to benefit her and Dunne. 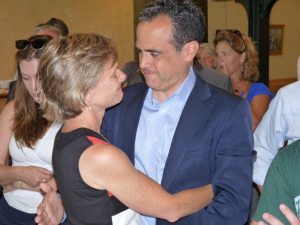 Minter downplayed Galbraith’s absence, saying they had “a nice conversation” on primary night and understood Galbraith was hosting a grandchild at his home in Townshend. Galbraith said the family visit and a five-hour round trip drive were the reasons he didn’t attend the Burlington event.

Galbraith and Minter are polar opposites on industrial ridgeline wind projects, with Galbraith strongly opposed to their construction. The wind project siting issue took center stage in the last week of the campaign after Dunne said he supported giving communities veto power over building projects within their borders. Dunne lost a key endorsement from environmentalist Bill McKibben, who switched over to Minter.

House Speaker Shap Smith, who finished second in the lieutenant governor’s race, broke down in tears and called his wife to the stage after he described what a “tough year” his family had after her cancer diagnosis. Smith initially ran for governor but dropped out when his wife, Melissa Volansky, became ill. He entered the lieutenant governor’s race late, in May, after her treatments proved promising. 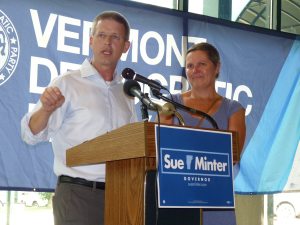 The applause greeting Smith, who talked about the plight of others less fortunate than his family who also struggled this year, was some of the most sustained in an hourlong love fest filled with clapping and hugs.

The Democrats also applauded themselves for — unlike their Republican counterparts for governor — running generally positive, issue-driven campaigns. They noted that was particularly critical with the strong rhetoric in the presidential race, and there seemed no harsh feelings between Minter and Dunne after the long, hard-fought campaign.

Zuckerman, a farmer who picked broccoli Wednesday morning, said he hoped to work with Democratic Party officials and gain access to their lists and have their full support although he is a Progressive.

“I think I’ve earned it, certainly,” Zuckerman told reporters. In his speech, he said he hoped to campaign together with Minter, which Rep. Peter Welch said could benefit Minter as she seeks to lock down the progressive wing of the party. Minter was endorsed by longtime Democratic leaders including former Govs. Madeleine Kunin, Howard Dean and Phil Hoff.

However, party Executive Director Conor Casey said after the rally that Zuckerman’s access to party information is subject to discussion.

“When Progressives and Democrats work together, good stuff definitely happens,” Casey said, adding that “we are distinctly different political parties, so we have to address that.”

“I think we’ll sit down with party leaders and figure out what our relationship will be moving forward,” he said of Zuckerman.

Casey, the most aggressively of all the speakers, went after Republican gubernatorial nominee Phil Scott, drawing applause when he said the party would force Scott into “taking a position on some issues.” Casey also criticized Scott for calling for budget cuts without giving examples and noted Scott had opposed paid sick leave legislation and raising the minimum wage.

Political analyst Eric Davis said Wednesday that Minter will have to explain to voters how she will be “something other than (Gov. Peter) Shumlin’s fourth term” and prove she can “stand up to” the Democratic majorities in the Vermont House and Senate. He also wondered if Sen. Bernie Sanders, who issued a key endorsement for Zuckerman, will actively help Minter.

Davis said Dunne had a bad last two weeks on the campaign trail but that Minter deserved credit for a well-run campaign, raising lots of money and surpassing Dunne, who Davis said had the early lead.

“Dunne focused too much on fending off Galbraith and taking potshots at Minter, not enough on building positive support for himself,” Davis said. 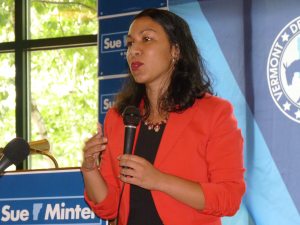 Burlington Rep. Kesha Ram, who finished third in the lieutenant governor’s race, gave an impassioned endorsement of Minter and stressed her importance as a model for women seeking office. She praised Zuckerman’s spirit and spoke of her deep respect for Smith.

Welch recalled the first time he met Minter, when they were skiing together at Bolton Valley at night and Minter, an expert skier, went off trail and out of the lighted area.

“She made it down then, like she made it through this campaign,” Welch said. The congressman had flirted with running for governor but opted instead to seek re-election and said Wednesday he had no regrets about his decision. One potential conflict to a Welch run would have been the fact that his wife, former Rep. Margaret Cheney, serves on the Public Service Board.

Welch said in an interview that Minter could benefit from “the tailwinds” of Hillary Clinton seeking to be the first female president. In addition, he said Zuckerman on the Democratic ticket would help bring Progressives to the polls.

Welch told the losing candidates he was unsuccessful twice running for statewide office, first for Congress and then for governor, before he won his seat in the U.S. House. He said the hardest part about losing is not the disappointment but rather not getting to do the work the office offered the opportunity to do.

A subdued and tired Dunne vowed to keep fighting for economic justice. One elected Democrat said Dunne was done with electoral politics after suffering a third statewide loss. He lost the lieutenant governor’s race in 2006 and finished fourth in the Democratic primary for governor in 2010, the last time the seat was open. Shumlin, who won that year, decided not to seek re-election this year after serving three terms. The governor is on vacation this week.

The crowd at the unity rally was substantially smaller, about 75 people, than at a similar event in 2010, where hundreds watched the four other candidates who sought the Democratic nomination for governor rally behind Shumlin.

Secretary of State Jim Condos had high praise for Tuesday’s election turnout, about 25 percent of eligible voters. He said that would exceed or rival turnouts for the contested primaries in 2010 and 2000 (when Republican Ruth Dwyer defeated William Meub in the midst of the “Take Back Vermont” movement).

Condos said moving the primary to early August had not proven a detriment to turnout, as some had expected, and that it is the issues and contested races that draw voters.

Galbraith said he had a hard time condoning the outside money that benefited Dunne and Minter and wanted to see how that issue would be addressed before endorsing her.

“I don’t think anyone should lose much sleep about getting my support,” Galbraith said. “There wasn’t that much of it.”

Galbraith said he felt he moved Minter and Dunne to the left in the debates, getting them to support an increase in the minimum wage and returning donations from corporations.

“I do think Sue is a wonderful person. She’s well-qualified to be governor. I only have one significant policy disagreement with her: whether we protect our ridgelines or not,” Galbraith said, adding that his disagreement with her on campaign funding was a “conduct issue” not a policy issue.

Thanks for reporting an error with the story, "Democratic embrace of nominees comes with asterisk or two"