The Vermont Clean Energy Development Fund, drawing from cash paid to the state by Yankee owner Entergy, has given $400,000 to the Brattleboro-based Windham Regional Commission to develop the program over the next several months.

Officials say grants — and possibly loans at some point — will be geared toward small-scale renewable projects in the county. What type of projects might benefit has not yet been defined, said Marion Major, a planner at the commission.

“We're looking for a lot of public input to see what the region wants and needs in terms of renewable energy generation and economic development,” Major said. 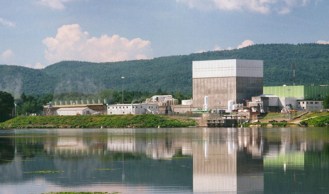 About a year before ceasing power production at Vermont Yankee, Entergy and Vermont officials inked a shutdown settlement agreement. That 2013 deal included Entergy funding for economic development and energy projects to help cushion the blow of the plant's closure.

The energy funding came via $5.2 million Entergy had paid into an escrow account for the state Clean Energy Development Fund. At least half of that, or $2.6 million, had to be allocated for “activities in or for the benefit of Windham County,” according to the settlement.

The state allocated an additional $300,000 to a solar financing program in Windham County, and officials also have set aside $300,000 for anaerobic digester projects.

That leaves the $400,000 just allocated to the Windham Regional Commission. Andrew Perchlik, who manages the state Clean Energy Development Fund, said the commission was a natural choice to come up with a new renewable energy funding program.

“They've already engaged in planning and in energy planning for the whole county,” Perchlik said.

He added that “it just makes sense” for the regional commission — rather than the state — to come up with the program's parameters.

Major said the commission will host public meetings this fall to help guide development of the grant program. There also will be a place on the commission's website where officials will collect input.

The plan is to begin accepting grant applications by November. Major said the commission also is looking into the possibility of “creating a revolving loan program so this funding can continue to be reinvested locally.”

Grants are expected to start at about $10,000, and Major said projects that could benefit include heat generation, electricity generation and even transportation-related initiatives. But there aren't many other specifics at this point, as officials want to hear from Windham County residents first.

“It will be interesting to hear what people come up with,” Major said.

While the Windham Regional Commission award initially appeared to have locked up the last of the county's renewable energy funding from the Yankee settlement, state officials still are evaluating how that money's being used.

For example, Perchlik said both the solar financing and digester funding have generated less interest than expected.

On the solar side, the state is working with the Vermont State Employees Credit Union. The credit union gets Clean Energy Development Fund money to offer lower interest rates on loans for residential solar projects.

But Perchlik said only about $25,000 has been expended on that program, and state officials are working with the credit union and solar companies to see how the initiative might be tweaked.

The anaerobic digester funding has found no takers, Perchlik said, and the state is re-evaluating that funding.

“Our goal is to have the best impact for the benefit of Windham County,” he said.

Thanks for reporting an error with the story, "Windham County renewables to get boost via Vermont Yankee"