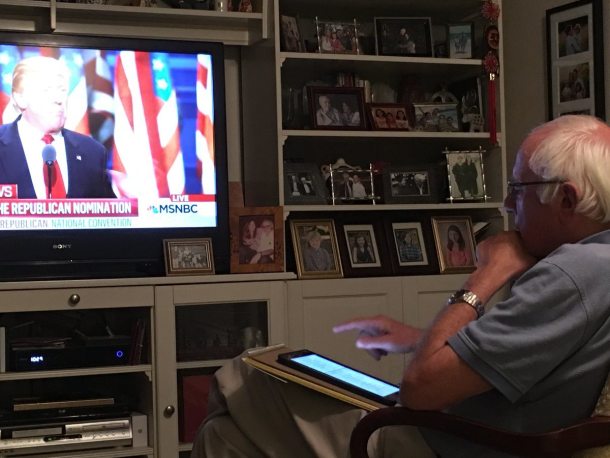 (Editor’s note: “Bernie Briefing” is a weekly campaign-season look at how Vermont U.S. senator and Democratic presidential candidate Bernie Sanders is playing in the national media.)

A year ago, The Washington Post began its first story on Bernie Sanders’ bid for the White House: “He seems an unlikely presidential candidate — an ex-hippie, septuagenarian socialist from the liberal reaches of Vermont who rails, in his thick Brooklyn accent, rumpled suit and frizzy pile of white hair, against the ‘billionaire class’ taking over the country.”

This week, that same man is arriving at the Democratic National Convention in Philadelphia with 1,894 delegates and a prime-time speaking slot expected to draw his biggest television audience yet.

Sanders may not have won his party’s nomination — his primary opponent, Hillary Clinton, boasts almost 1,000 more delegates. But that’s not stopping the Vermonter from holding a by-invitation-only “very special meeting” with select supporters Monday to discuss “how to keep the political revolution going strong” for such causes as health care and social, economic and criminal justice, according to an email obtained by The Associated Press.

“At this point with Sen. Sanders coming out to support Hillary Clinton but also not dropping out,” Utah delegate Oscar Mata told the AP, “it puts us delegates in a difficult position to try and read between the lines about what to do.”

“Is this guy running for president or dictator?” the Vermonter wrote last week in a Twitter message that received some 34,000 retweets and 46,000 likes — the most popular tweet during Trump’s Republican National Convention acceptance speech, The Hill reports.

But calls for party unity haven’t been helped by a WikiLeaks release of almost 20,000 Democratic National Committee emails from the primary and caucus season that privately criticized and mocked Sanders as the organization publicly pledged neutrality.

“Annoyance at Bernie Sanders and his fans is a reoccurring (sic) theme in the emails,” The Intercept reports in a story full of examples. “The emails also show internal pushback on major Sanders causes such as holding more debates and ending superdelegates.”

One DNC staffer has apologized for sending an email that questioned Sanders’ religious beliefs. The staffer’s Facebook post of “regret that (his) insensitive, emotional emails would cause embarrassment” was quoted in full on Politico. And party Chairwoman Debbie Wasserman Schultz, in a surprise announcement Sunday, said she would resign her post after the convention.

Sanders supporters also are upset with Clinton’s naming of Virginia Sen. Tim Kaine — deemed by the press as “centrist,” “middle-of-the-road” and, in one case, “vanilla, but he’s the textured, whole-bean Breyer’s kind” — as her vice presidential nominee.

“The outrage is not just smoldering — it is burning,” Norman Solomon, a leader of an independent alliance calling itself the Bernie Delegates Network, told the Post. “There has been an insurgency in the party, far beyond anybody’s expectations. Hillary seems to have gone out of her way to say — not just to her delegates but to progressives — that she hasn’t learned anything from that insurgency.”

More than 30 protests, many in support of Sanders, are scheduled for outside the Wells Fargo Center, the Philadelphia Inquirer reports, starting Sunday with a “March for Bernie” and continuing with demonstrations Tuesday at the Municipal Services Building and Thursday at FDR Park.

Then again, Sanders supporters won a compromise from Clinton’s team late Saturday to create a “unity commission” to “review the entire nominating process.”

Reports Politico: “The new commission offers two points meant to satiate Sanders supporters: a focus on recommending changes to the Delegate Selection Rules for the 2020 Democratic National Convention; and also to examine ways to expand caucuses and primaries.”

And the Los Angeles Times: “The deal represents another way Bernie Sanders has left his mark on the Democratic Party despite being defeated by Hillary Clinton in the primary. The party’s policy platform has already been modified to reflect some of the Vermont senator’s goals, including a $15-per-hour federal minimum wage and free tuition for many college students.”

Democratic leaders don’t have much time to calm any lingering conflict before gaveling in the convention Monday at 4 p.m., when they’ll finalize the party platform and rules before listening to opening night speeches by Sanders and first lady Michelle Obama.

For all the turbulence, Sanders isn’t expected to mimic Republican Sen. Ted Cruz, who sparked boos during his own convention speech when he declined to endorse his party’s nominee.

“He’s not Ted Cruz, in so many ways,” Sanders spokesman Michael Briggs told the Post.

The campaign elaborated in a statement to Politico: “Sanders will stress that the most progressive platform in Democratic Party history includes agreements he reached with Clinton to dramatically expand health care access and to make public colleges tuition-free for students from families with annual incomes up to $125,000 a year. … Sanders also plans to rip into Trump for siding with the Koch brothers and echoing fossil fuel industry claims that climate change is a hoax despite the virtually-unanimous scientific consensus that the warming planet is causing devastating harm.”

“Sanders also will send a message to the convention and to the 13 million voters who supported him that they have begun a political revolution to transform America and that the revolution — Our Revolution — continues. ‘Together,’ he will say, ‘we continue the fight to create a government which represents all of us, and not just the 1 percent — a government based on the principles of economic, social, racial and environmental justice.’”

Sanders himself, appearing Sunday on ABC’s “This Week,” NBC’s “Meet the Press” and CNN’s “State of the Union,” added that while the party email scandal should spur Schultz to resign, it won’t stop him from continuing to endorse Clinton.

“What is most important now is defeating the worst candidate for president that I have seen in my lifetime, Donald Trump,” he told ABC.

Sanders confirmed he received a call from Kaine after his vice presidential selection.

“Tim is an extremely bright guy, a very nice guy,” the Vermonter said on CNN. “Are his political views different than mine? Yeah, they are. But trust me, on his worst, worst, worst day Tim Kaine is 100 times better than Donald Trump will ever be.”

“Would I have preferred to see somebody like an Elizabeth Warren selected?” Sanders added on NBC. “Yes, I would have. But my job right now is to see that Donald Trump is defeated and Hillary Clinton is elected.”

Thanks for reporting an error with the story, "Bernie Briefing: Sanders ready for his convention close-up"