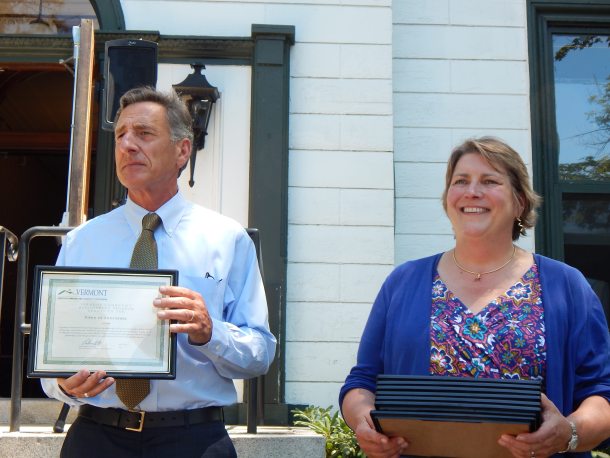 [A] key member of Gov. Peter Shumlin’s Cabinet will take a temporary job as the president of Vermont Technical College in Randolph.

Patricia Moulton, the secretary of the Agency of Commerce and Community Development, will take over while the Vermont State Colleges board of trustees conducts a national search for a new VTC president.

Chancellor Jeb Spaulding, the former secretary of the Agency of Administration, praised Moulton in a news release announcing her new position. She replaces Dan Smith, who is leaving his job in August to run the Vermont Community Foundation.

“It’s a great opportunity to work for a great institution, and I can bring to that institution great knowledge about education and workforce for the state of Vermont,” Moulton said in an interview Thursday.

Moulton said she plans to apply for the permanent position to run Vermont Technical College when the national search begins. She leaves the administration Sept. 9 and starts the interim job Sept. 19.

Vermont Technical College is based in Randolph Center but has a residential campus in Williston and satellite campuses in Brattleboro, Bennington and at six Vermont nursing homes.

Moulton said her experience managing large state-funded organizations is similar to running a college. “I have a fairly steep but hopefully short learning curve on the specifics on what’s happening at Vermont Tech,” she said.

“Education is so critical to economic development, so I really see the two very closely related and intertwined, and I think administration of a large organization is similar between a college and state government,” Moulton said.

Spaulding said in a news release: “Pat has been a great partner of Vermont Technical College throughout her career and clearly understands the important role the college plays in transforming the lives of Vermont students and creating a stronger economy for the state of Vermont.”

He praised Moulton’s “considerable leadership skills, statewide connections with employers and economic development leaders, and passion for Vermont Tech’s future” and said she would help the college form a stronger bond with the Community College of Vermont.

Moulton leaves her job at a time when her agency is under public scrutiny for how it runs the Vermont EB-5 Regional Center, which encourages foreign nationals to invest $500,000 in qualified development projects in exchange for permanent residency.

The U.S. Securities and Exchange Commission has accused developers at Jay Peak Resort of misusing $200 million in investor funds in a “Ponzi-like scheme.” The state accused the developers of 15 violations of consumer protection and securities laws.

“I don’t have any regrets,” Moulton said of her time as secretary. “I think we’ve done some amazing work recovering from (Tropical Storm) Irene, building strong communities and downtowns, and helping to innovate, and planning and our economic development.”

“We’ve done some great work with companies,” she said. “We’ve helped facilitate the creation of thousands of jobs. I think we’ve stabilized a lot of things in the agency.”

“EB-5 has certainly been a challenge, but I think we’ve done the best we can with the tools we have,” she added. “I’m just really proud of the work that the team at ACCD have done, and I know they will carry on. There’s a lot more to do.”

Looking forward, Moulton said she wants to help build more relationships between employers and the college, plus expand degree offerings and certificate programs.

Thanks for reporting an error with the story, "UPDATED: Commerce chief leaving for interim Vermont Tech job"