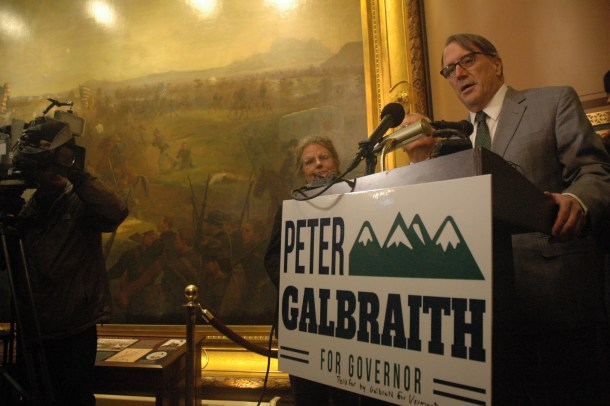 [A]nother Wikipedia user has stepped up to try to shape the site’s page on Democratic gubernatorial candidate Peter Galbraith after VTDigger spotlighted one user’s often-disputed edits.

Less than a day after a VTDigger report outlined dozens of strategic cuts and additions that Wikipedia editor Devotedamerican made to the page, another user known as Westerncivil ended a six-month editing hiatus to further revise the Galbraith page.

The 11 edits Westerncivil made Friday included deleting a reference to a lucrative 2010 court decision in Galbraith's favor and adding details regarding his diplomatic career, as well as information about amendments he introduced as a Vermont state senator from Windham County.

On a bio page, Westerncivil is self-described as a “Professor of History in San Francisco, formerly UN Official.”

Galbraith said last week that neither he nor any associate was Devotedamerican, the first editor VTDigger wrote about. Ian Moskowitz, Galbraith’s campaign manager, said Monday that Westerncivil was also not Galbraith but intimated that it may be a former colleague.

“Peter spoke to a former U.N. colleague who wanted to know about his record in Vermont,” Moskowitz said, declining to name the person.

Westerncivil made his or her first Wikipedia edit in October 2014, deleting a long section on the Galbraith page that referenced the oil profits the former diplomat obtained through negotiating Kurdish oil rights.

After another Wikipedia editor, identified as Mcmatter, quickly reinstated the details on Galbraith’s oil deal, Westerncivil again deleted the paragraph. It was again reinstated.

In 2004, Galbraith served an advisory role in the drafting of Iraq’s constitution, which, in its final form, extended Kurdish sovereignty over oil rights. In 2009, the Norwegian newspaper Dagens Næringsliv revealed that Galbraith had benefited financially from this constitutional provision, receiving a large financial stake in DNO, the Norwegian company given access to the Kurdish oil reserves.

All but two of Westerncivil’s edits relate to Galbraith.

Westerncivil’s Friday edits included the deletion of a paragraph describing a British court’s 2010 decision to compel DNO to award Galbraith between $55 million and $75 million after he claimed a financial stake in the oil company.

The details on the payout were first reported by The New York Times, though Galbraith has said the settlement numbers reported were far too high.

Justifying the deletion, Westerncivil wrote in a forum for Wikipedia editors: “Galbraith's financial disclosure shows the figure was $10 million not $75 million.”

It’s unclear what disclosure Westerncivil was citing, and Wikipedia user FourViolas got no response when asking Westerncivil to “Please provide citation to financial about DNO gains.”

The numbers perhaps could be garnered from a list of assets Galbraith’s campaign released shortly after announcing his gubernatorial bid. The financial details show, among other things, $11.1 million in assets at Porcupine LLC, a group that owned a large stake in a Kurdish oil field.

Galbraith’s campaign described the April financial release as “a preliminary list of assets,” promising to provide a more detailed picture in the near future.

Asked Monday if additional asset disclosure would reveal millions more received from the DNO settlement, Moskowitz said, “Peter has no additional assets other than what's been disclosed.”

Moskowitz reiterated that The New York Times’ number was too high but said he could not confirm if the $11.1 million was the actual payout Galbraith received from DNO, saying his boss was not allowed to talk publicly about the settlement.

In addition to work on the Kurdish oil deal, Westerncivil’s recent edits also looked to minimize Galbraith’s status as a candidate in his brief bid in 1998 for a U.S. House seat in Massachusetts.

Westerncivil looked to delete the entire paragraph describing Galbraith’s short stint in Massachusetts politics, though the change was overturned by other Wiki editors.

Westerncivil then worked within the paragraph, changing “briefly campaigned” to “explored running.” Westerncivil also deleted reference to the eventual winner of that race, Mike Capuano.

“None of the press stories say he ever announced and he wasn't on the ballot,” Westerncivil wrote in the editing forum. “He apparently never changed his residence from Vermont.”

FourViolas did not accept the changes, writing that “two high-quality sources confirm he was ‘campaigning’ or ‘in the race,’ out making speeches and holding fundraisers, even if he apparently never officially filed.”

(Correction: Peter Galbraith was not working for the United Nations when he was an adviser on the Iraqi constitution in 2004. This story was updated June 14 at 2:25 p.m. to reflect that fact.)

Thanks for reporting an error with the story, "Galbraith Wikipedia page continues to be battleground"