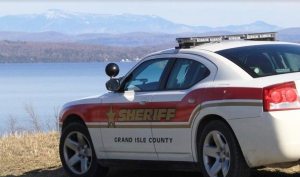 [T]he Grand Isle County Sheriff’s Department has paid $30,000 to settle a case alleging that one of its deputies illegally discriminated against a Mexican citizen during a routine traffic stop.

The case stems from a February 2015 incident where Sgt. Blake Allen pulled over Kerry Martin for speeding. Martin came away from the incident with a warning, but his passenger Lorenzo Alcudia was pulled from the car and detained for hours by federal agents.

Alcudia, who is Mexican, was working on a dairy farm in Alburgh. Martin is a white U.S. citizen. The two were on their way to a meeting of the advocacy group Migrant Justice.

During the traffic stop Allen repeatedly asked if Alcudia was “supposed to be here,” documents show. U.S. Border Patrol agents were called to the scene and detained Alcudia, who now faces deportation.

In a 32-page report summarizing its investigation, the Human Rights Commission says Alcudia’s skin color and national origin “played a chief role” in the way he was treated during the traffic stop. It also says there is “overwhelming evidence” that Allen was “primarily interested” in Alcudia’s immigration status.

The settlement money will be split between Alcudia and the Human Rights Commission.

“Being profiled by the sheriff was a terrible experience, and I live with the consequences every day,” Alcudia said in a statement provided by Migrant Justice. “I hope that police will learn from this case and stop discriminating against people like me.”

Will Lambek, with Migrant Justice, said a hearing has not yet been set in Alcudia’s deportation proceeding.

All state, county and municipal law enforcement agencies in Vermont must adopt bias-free policing policies that include the essential elements of the Criminal Justice Training Council policy by July 1 anyway, as a result of a 2014 law meant to address similar incidents of discrimination by police.

The law requires the council to develop its model policy in consultation with specific stakeholders, including Migrant Justice, the Human Rights Commission and the Vermont chapter of the American Civil Liberties Union. The council will meet Tuesday to discuss and potentially vote on a draft policy.

Lambek, with Migrant Justice, said a draft policy circulated to law enforcement and others last week makes several crucial departures from a previous draft circulated in May, which he said he and others thought would be the policy debated Tuesday.

That policy was developed over the last six months through at least five meetings between stakeholder groups and law enforcement. Now Migrant Justice says that “at the 11th hour, police representatives have made unilateral changes” that undermine safeguards against discrimination.

Some provisions in the May draft policy were removed, while others are marked as nonessential elements, which means police agencies in the state won’t need to adopt them.

Rick Gauthier, the Vermont Criminal Justice Training Council executive director, said the changes were made to comply with the legislative intent of Act 193, the 2014 bias-free policing law.

Police agencies are currently required to have policies modeled after those put forward by the Vermont State Police or the attorney general. Gauthier said the council’s mandate was essentially to meld those two policies into one that would serve as the “floor” for agency rules.

Gauthier acknowledged that the decisions about what provisions would be marked essential or nonessential, as well as changes in the draft language, were made based on consultations with members of law enforcement.

Some of the provisions that interest groups like Migrant Justice wanted included as essential elements exceed the scope of Act 193’s legislative intent, Gauthier said.

Lambek said that far from helping to create the uniform policy state lawmakers were looking for, dividing the draft into essential and nonessential elements will lead to a patchwork of policies across the state.

Elements that were deemed nonessential by law enforcement leave open the possibility of the same type of discrimination that Alcudia experienced and that forced the Grand Isle County sheriff into a settlement that cost taxpayers $30,000, Lambek said.

Of particular concern to Lambek was the removal of a provision that stated, “(Agency members) shall utilize federal databases in attempts to establish an individual’s identity only when there is reasonable suspicion that the person has violated Vermont laws and all other attempts to identify the person have failed.”

In its place is a sentence that reads, “(Agency members) may utilize federal databases in attempts to establish an individual’s identity.”

Lambek said that leaves open the possibility that law enforcement will continue to exploit what he calls a loophole in current policies, wherein police check a person’s immigration status under the guise of establishing identity.

The Grand Isle Sheriff’s Department told investigators with the Human Rights Commission that Sgt. Allen was questioning Alcudia “for the purpose of determining his identity, not his immigration status,” according to its report.

When asked about that specific language being removed from the latest draft, Gauthier said, “I don’t know why that entire phrase was removed.”

Looking back at his notes, Gauthier said he believed that members of law enforcement felt it was too broadly worded and could hamstring Vermont officers when they’re working with federal officials on joint task forces, especially those focused on border security.

Gauthier said he would flag that passage for members of the council, so they could discuss it at Tuesday’s meeting. He said he’s flagged several other sections for review as well.

Representatives from U.S. Customs and Border Protection, as well as interest groups such as Migrant Justice and the ACLU, are invited to Tuesday’s meeting so they can weigh in on the draft recommendations prior to a vote.

Thanks for reporting an error with the story, "County sheriff’s office settles discrimination case for $30,000"